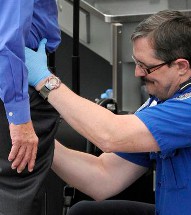 Well, I used to be a frequent flier because of my military assignments.  Back in those days I became quite good at making sure that I presented as little trouble to TSA screeners as possible.  I planned and organized every part of my trip to make sure that the screening process would be quick and painless to all involved. Everything I did was done to make things easy for the TSA screeners because I figured that they had a thankless task dealing with irate travelers already pissed off about long lines, baggage fees, flight delays and generally being treated like chattel every step of the way. On rare occasion something would occur that caused me to get pulled aside, maybe it was my field communion set, my oil stock or some other religious item.  These were generally minor inconveniences that were resolved quickly and in a usually friendly manner.
However on one occasion I was subjected to the most humiliating public humiliation of my life. I was travelling in my Khaki uniform.  Of course I had me rank and ribbons on and my USS Hue City belt buckle.  Where I live we have a very large military population that frequents our airport with many having to fly in uniform.  Thus the screeners tend to be respectful of military personnel in uniform.  One day back in 2003 well before the current “Say Cheese” and “Grope on Sight” order went out.  I took everything out of my pockets, took of my shoes and presented myself for inspection. Of course as I went through the scanner my shiny big belt buckle, shiny rank and multi-colored stack of ribbons set of the scanner.  I was ushered aside and told to remove everything and even told to unzip my trousers.  The agent in full view of hundreds of people then went through a hard pat down that included my “junk.” Meanwhile people who were obviously foreign and wearing clothing that could hide a truck bomb walked by without getting groped.  I was stunned, embarrassed and shocked. I had just completed a combat deployment and this idiot was treating me like a criminal.  When I got home I wrote a letter to the head of the TSA requesting an apology. I got no reply.  This soured me on the TSA even before the new draconian rules went into force.
You see I am a patriot, I want to see terrorists killed off like vermin and I don’t want to see another American or anyone else harmed. However it seems to me in their haste to look like they are doing something in the name of “security” that the Department of Homeland Security is willing to trample over the rights of self respecting, law abiding citizens using methods that the Gestapo would have had wet dreams thinking about. Back in 2001 civil libertarians warned of the dangers inherent in the cleverly named “Patriot Act.”  We are now seeing how an agency created by that act is willing to abuse citizens, and yes groping qualifies as abuse especially in the absence of probable cause.  But wait, probable cause is given when a person refuses to go through a high powered x-ray machine that looks through their clothing to expose their nakedness to TSA employees who in some cases have laughed and made fun of their subjects and some of which have found their way to the internet.

I have seen videos of TSA agents patting down tiny children and watched in horror when the traumatized children were crying.  I’m sorry that is as close to legal sexual abuse of a child as you can get.  But then to keep us secure it’s okay for the TSA to do things that would get a teacher, pastor, scoutmaster or anyone else thrown in jail and forever listed as a sexual predator.
When I came back from Iraq and was going in my Marine Corps pattern camouflaged uniform after an arduous return which culminated in an 18 hour flight from Kuwait to the States I was welcomed home to an airport on the East Coast. Customs agents were kind and we had a small group of really nice people welcoming us home.  As I ran to the connecting flight accompanied by my trusty assistant Nelson Lebron we got to the TSA screening checkpoint with minutes to spare.  We got our gear through the machine and then it was time for us.  I had to remove my shirt, my belt buckle and my boots and run to the aircraft gate with my boots untied because they were getting ready to close the gate.  At least the screeners were not rude but even still, for crying out loud, we just came home from Iraq.  Is there something wrong with this picture?  Have we lost our minds?  Welcome home from TSA.

Now if you ask me I think that the complaints of people are entirely justified. On the absence of being able to bring home Osama Bin Laden’s head on a platter we now assume that everyone is a terrorist and those that complain must be sympathizers. Well I tell you what, as someone who has seen the ravages of what terrorists can do dating back to the 1980s when the Red Brigades terrorized Americans, NATO allies and Germans bombing and killing.  However even the thorough Germans never subjected their citizens to this type of humiliation.  I think that they learned something from the Third Reich, something that we seem to have forgotten. The “Greatest Generation” went to war to defeat Nazi tyranny and free Europe from the evil of a police state.  Now it seems that our own TSA deems that we the people are the enemy.  I figured that out in 2003 and again in 2008.

I think now with the abuses being heaped upon Americans that people are finally taking notice.

Until things change let’s all just sit back and enjoy the groping, enjoy the friendly skies.  Your papers please.