A Great Day for Liberty for All

Today is a good day for freedom. It has been to long coming. The Supreme Court, citing the Fourteenth Amendment ruled in favor of Marriage Equality for Gays Lesbians and others in the LGBTQ community in the case of Obergfell v. Hodges. I am quite happy for my Gay and Lesbian friends  for this.

As historian and who has and continues to study the American Civil War, especially the fight for the abolition of slavery, the emancipation of African Americans and the extension of the the full benefits of citizenship and liberty.

As early as 1854 Lincoln posed the idea that the Declaration of Independence was “the standard maxim of free society …constantly spreading and deepening its influence,” ultimately applicable “to peoples of all colors everywhere.”

The understanding that the liberties enunciated in the Declaration extend to first to African-Americans was made part of the Constitution in the Thirteenth, Fourteenth and Fifteenth Amendments to the Constitution. The precedent of Fourteenth Amendment has been used to grant Suffrage to Women, to end Jim Crow laws, Black Codes and Separate but Equal laws. Today it was correctly used to ensure that all people have the freedom to marry.

The history of marriage as a union between two persons of the opposite sex marks the beginning of these cases. To the respond- ents, it would demean a timeless institution if marriage were extend- ed to same-sex couples. But the petitioners, far from seeking to devalue marriage, seek it for themselves because of their respect—and need—for its privileges and responsibilities, as illustrated by the petitioners’ own experiences.

The history of marriage is one of both continuity and change.

Changes, such as the decline of arranged marriages and the abandonment of the law of coverture, have worked deep transformations in the structure of marriage, affecting aspects of marriage once viewed as essential. These new insights have strengthened, not weakened, the institution. Changed understandings of marriage are characteristic of a Nation where new dimensions of freedom become apparent to new generations.

Most of the opposition to Gay marriage and for that matter to all Gay Rights has been from conservative Christians. Sadly it was conservative Christians who have been in the forefront of denying liberty to people in the country since the beginning of the abolition movement in the 1830s. They labeled fellow evangelicals in the abolition movement as “atheists, infidels, communists, free-lovers, Bible-haters, and anti-Christian levelers.”

This was not limited to Southern  conservative Christians.

The fact that so many Protestant ministers, intellectuals, and theologians, not only Southerners, but men like “Princeton’s venerable theologian Charles B. Hodge – supported the institution of slavery on biblical grounds, often dismissing abolitionists as liberal progressives who did not take the Bible seriously” leaves a troubling question over those who claim to oppose issues on supposedly Biblical grounds. Such men in the North spoke out for it “in order to protect and promote interests concomitant to slavery, namely biblical traditionalism, and social and theological authority.” [1] The Northern clerical defenders of slavery perceived the spread of abolitionist preaching as a threat, not just to slavery “but also to the very principle of social and ecclesiastical hierarchy.” [2]Alistair McGrath asks a very important question for modern Christians who might be tempted to support a position for the same reasons today, “Might not the same mistakes be made all over again, this time over another issue?” [3]

Throughout American history conservative Christians have often espoused a concept of limited liberty, liberty for the few and the powerful. This happened as I have noted during the fight against emancipation, but also Women’s Suffrage and the various Jim Crow laws and rights for other groups. This is happening again today with anti-Gay Christians attacking the ruling and like those who fought abolition proclaiming in apocalyptic language that Christians will be persecuted and that God will judge the United States for allowing Gays to marry.

However, the fact is that very little will change in the country, most people will move along. Christian conservatives will not be persecuted, religious liberties will not be violated they will be enhanced as churches who allow Gays to marry will be able to extend this rite of their churches to their parishioners and others.

Today, despite the cries of many on the American Religious Right liberty has been protected. as Lincoln said: the declaration’s promise of equality was “a beacon to guide” not only “the whole race of man then living” but “their children and their children’s children, and the countless myriads of generations who should inhabit the earth in other ages.” [4] 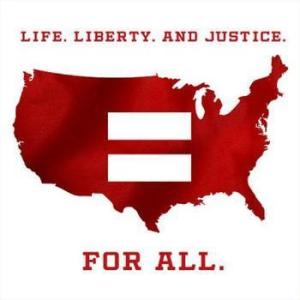 I am happy for my Gay friends who have labored for this for so long enduring hatred, violence and social, political, religious and economic discrimination for so many years.

Have a great night,

3 responses to “A Great Day for Liberty for All”