The Lure of Trump’s Cross of Gold 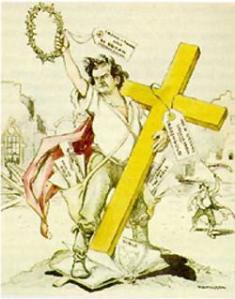 In the post-election euphoria of the prosperity preachers who very Donald Trump as a political savior, and the President Elect’s stacking of his cabinet with billionaires of the first order, most of whom have no experience in the cabinet positions or are opposed to the missions of the departments they are to head one wonders what the 80% plus of self-identified Evangelical of Conservative Christians were thinking. But then, the answer is not that hard to find. For decades many of these people have been taught by their leaders that government policies that actually protect and benefit them are evil, and that God himself is basically a survival of the fittest Social Darwinist, that is basically the Gospel that they have been taught for decades. I used to be a clergyman in a denomination where many people believed and practiced such a faith.

So let me ask if you remember when conservative Christian politicians and preachers actually supported working people? I am not kidding, there was a time when some did exactly that and did so in the highest reaches of their political parties. Unlike today’s preachers they were not just lobbying for more tax cuts for the most wealthy, and extolling the job “creators” over the the people whose labor actually produces products, instead they spoke boldly on behalf of regular people. Sadly today all of the major political figures as well as most of the minor ones who claim to be “conservative Christians” have more in common with the greedy Robber Barons than one of the most celebrated conservative Christian politicians who has ever lived.

William Jennings Bryan was one of the most influential politicians of his era. Bryan served as Secretary of State under Woodrow Wilson, he was a Senator and three time Presidential Candidate. He was also a very conservative Fundamentalist Christian perhaps most famous, or perhaps infamous now as one of the prosecuting attorneys at the Scopes “Monkey” Trial of 1925. In fact I can find that Bryan’s handling of that case played to the basest religious and social hatred of his day and though he thought that he was defending “Biblical” values  ended up making Christians look but small minded, intolerant and hateful. The movie Inherit the Wind, though a fictional account of that trial, shows how decent Christians can become consumed with hatred in the name of righteousness.  It is a sad thing that Bryan is most remembered for the Scopes Trial than when he bucked the political system of both the Republican and Democratic parties to speak up for workers and small businessmen. Personally I cannot imagine Ted Cruz, Mike Huckabee, Marco Rubio or any other supposedly Christian political leader, especially the President Elect doing what Bryan did.

Whether one agrees on Bryan’s fundamentalist religious doctrine regarding the creation of the earth or the manner of how God created the earth,  one has to admit that of pre-Great Depression politicians he was quite amazing. Especially in how he saw through the Godlessness of unbridled capitalism and the devaluation of workers by valued capital over the people that actually produced anything.

As an American and a Christian I have to look at the body of work and life of a man. I don’t have to agree with all that they stood for or did and though I find much fault in Bryan and his supporters in the Scopes Trial I do not throw out the good things that he did and got right.

I think the apex of Bryan’s political thought is encapsulated in his speech at the Democratic National Convention of 1896, what is now called the Cross of Gold Speech.

When one looks at it now it really is timeless. Bryan saw through the charade that was being played out by politicians and the big money Wall Street types that they represented with great verve. It was a speech that one might have heard come from a prophet in the Old Testament.

I am just going to quote a couple of pertinent sections from the speech to trigger the thought of anyone reading this article. I think that they could be spoken today in light of the way that many conservative Christians both Evangelical and Fundamentalist Protestants, Roman Catholics and those that preach the so called “Prosperity Gospel” have thrown their support behind ideas that are nothing more than unvarnished, crude materialism of the worst kind. In fact I believe that it is nothing more than the “baptism” of such thought by Christians are among the biggest reasons for the massive exodus of people from the churches and the rise of the “Nones,” or those with no religious preference.

His words are striking in their directness and honesty. They are not only Christian but they are deeply American. He called on his Democratic party, which had been as bad as the Republicans during the age of the unregulated Robber Barons who used the Gold Standard to manipulate the markets and eliminate silver as currency to their benefit to be different:

His arguments could be called true Christian populism. Bryan talked about two ideas of diametrically opposed types of government and economics:

“There are two ideas of government. There are those who believe that, if you will only legislate to make the well-to-do prosperous, their prosperity will leak through on those below. The Democratic idea, however, has been that if you legislate to make the masses prosperous, their prosperity will find its way up through every class which rests upon them.”

He concluded his speech with this statement.

“Having behind us the producing masses of this nation and the world, supported by the commercial interests, the laboring interests, and the toilers everywhere, we will answer their demand for a gold standard by saying to them: “You shall not press down upon the brow of labor this crown of thorns; you shall not crucify mankind upon a cross of gold.”

When I hear the unholy trinity of politicians, pundits and preachers who extol the virtue of capital over labor and the worship of wealth as the highest good I wish that there would be some that would remember that the people who actually make things, grow things, fix things and maintain things are not just human capital, but people.

Despite his rigid anti-science beliefs, as well as his often pro-Jim Crow positions, one almost wishes for the day that a man like William Jennings Bryant spoke for Christians rather than seeing Christians throw themselves at the feet of a man who has pulled the wool over their eyes, emasculated them, and will doom them and their churches to irrelevancy as more and more people abandon the the Christian faith. 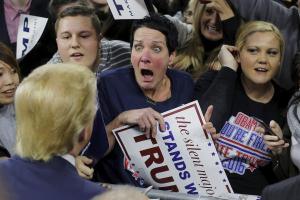 Today that unholy trinity is poised to take over every branch of the Federal Government because of the fact that Evangelical and Conservative Christians abandoned all principle to elect a man who despite his words during the campaign has a history of standing against everything that they believe. And after all, it is people that matter and sadly that doesn’t seem to matter to the sycophants who cheer every word of the President Elect even as he and his billionaire cabinet members enact policy after policy that will destroy them.

That is something to think about.