Note: I write this after Judy and I did something that we never normally do…no not that, whatever that is in your dirty minds.  For us this was to watch a movie in a theater a second time.  We did this tonight.  We went and saw the Star Trek movie again and enjoyed it as much as the first time.  As I thought about us seeing it this afternoon I was writing on another topic, but it was much too involved for my brain at this moment in time.  So I saved it and went back to Star Trek.  This is the first in a series about Star Trek Captains and deals with the only Captain on a Star Trek series who is not Captain of a Star Ship, but rather a Star Base. In this case, Captain Benjamin Sisko of Deep Space Nine.  In some ways I dedicate this to those fine officers who do not get the commands at sea, or if they are in the Army or Marines those who command bases or garrisons rather than maneuver units.  I dedicate this particular post to Colonel Tom Allmon, US Army Retired who I served with at Fort Indiantown Gap Pennsylvania and who later commanded Fort Meyer Virginia.  This will be a first of a series that will appear periodically dealing with characters from the various Star Trek series and films and work them into what commanders and staff officers in the U.S. Military deal with on a daily basis.

“There is more to baseball than physical strength. It’s, uh… it’s about courage; and it’s also about faith; and it is also about heart. And if there’s one thing our Vulcan friends lack, it’s heart.” Captain Benjamin Sisko 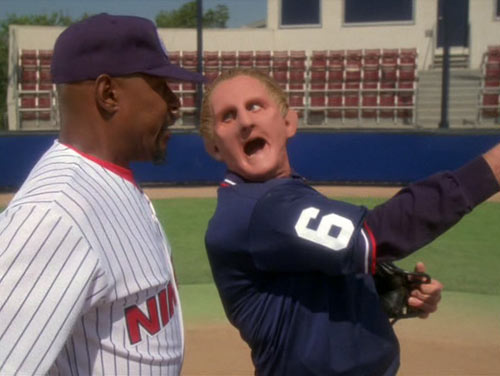 Sisko being thrown from the game against the Vulcan Logicians

Star Trek Commanding Officers are interesting to compare and contrast and usually have a lot to do with how each Star Trek series was received.  I know a lot of people who like Captain Kirk over Captain Picard or Picard over Kirk.  There are those who prefer Kathryn Janeway to any of the men.  Of course all of these were the Captains of Federation starships.  Like any naval service it is the Captains of warships that have the “sexy” jobs.  Commanding officers of service vessels, auxiliaries or bases tend not to be the commanders who are being groomed for Flag rank.  The newer and more powerful the vessel is, the more likely that the skipper is being groomed for a higher level command.    This is true in any Navy and is certainly true in the world of Star Trek.  Thus we have the unusual situation for a us to deal with and perhaps the reason that some people do not care for Deep Space Nine as much as for the series involving Starships as the setting for the show.  Captain Benjamin Sisko of Deep Space Nine doesn’t command a ship. In fact he is the survivor of the USS Saratoga, a ship lost when the Federation fleet was decimated by the Borg at Wolf 359 in which his wife is killed in action.

Having served at sea and ashore I can say that the divide between commanders of warships and those of bases is deep.  This is not a pejorative statement at all, but a recognition that the services tend to weigh command of a warship higher than that of a base.  Both situations require men and women of certain temperament and ability.  Good commanders can function and adapt anywhere but may because of the needs of the service find themselves in assignments that are less glamorous and maybe even less desirable from a career point of view.  Such is the case with Benjamin Sisko.  He is sent to an important but remote base with a small Federation staff off the planet Bejor which recently gained its independence from the Cardassian Empire.  The space station had previously been a Cardassian station.

Sisko’s assignment like that of any overseas base commander is an interesting weave of station commander, quasi-ambassador to the Bejoran government, small town mayor and overseer of security in the sector which becomes much more important with the discovery of a “worm hole” in space nearby.  In the process he must deal with the ever present Cardassians who through Gul Dukat the former station commander continually attempt to re-assert their dominance and authority over both the station a Bajor.  As the series moves along he is forced more onto a war footing as a race from a sector of the galaxy connected through the worm hole attempts to invade the sector which Deep Space Nine serves as the outpost and tripwire.

All through this Sisco must deal with a multiplicity of problems, not unlike commanders of US Naval bases in sensitive and potentially volatile regions do on a daily basis today.  Sisko must deal with the unique history, culture and religion of the Bajorans.  Likewise he has to deal with the divides between moderate and fundamentalists in the Bajoran religion. He also must deal with tensions between the religious Bajorans and Bejoran secularists all the while trying to heal the scars of the Cardassian occupation, physical, physiological and spiritual to the people of Bajor.

As if this were not enough he has a host of potential problems on his station.  The station has a strong presence of people who in today’s parlance would be called Third Country Nationals, or TCNs.  These individuals and their families run shops, bars and restaurants on the station, sometimes within not quite within the margins of legality, in particular the Bartender Quark and tailor Garak.  Captain Sisko deals with all of this in addition to normal issues that any commander would face dealing with his own personnel, operations and logistics functions.  While he is the base commander he has a Bajoran as his deputy and Bajoran personnel throughout the station who have to work with Starfleet personnel.

It would similar situation to that faced by US commanders of bases in the Middle East who have to deal with very similar issues today.  That is what makes Sisko for me such an interesting character.  His job is not the wide ranging, high visibility “sexy” star ship Captain assignment.  This as well as the more dark underlying tone of the show makes it more of a mystery.  Sisko, who brings with him a love of Jazz, New Orleans cuisine and baseball is an interesting character, if nothing else from my perspective the subject of baseball.   He introduces baseball to the station, even forming a team which plays the Vulcans who are surprisingly good ballplayers.  It could be that baseball is a game that the analytical Vulcans would find an affinity.  Baseball is filled with intricate nuances and statistical probabilities that would numb the mind of a Klingon, who are most likely Football fans, but which are the delight of Vulcans.  If the Romulans were to take up the game they would probably play it with a harder edge and more emotion than the Vulcans but would appreciate the logic of the game.  Even still Benjamin Sisko and the ever present baseball on his desk are something that I appreciate.

The commanders of bases on the edge of empire that Sisko represents and the complexities of their commands are seldom recognized.  Their jobs are not sexy, and most do not get picked to be Flag or General Officers.  Those picks generally are reserved for those who command at sea or command maneuver units or if in the Air Force those who command Fighter or Bomber Wings.  The men and women who command bases both in the United States and overseas fill an important role. While not glamorous they are the people that tend to be the face of the United States military and government wherever they are stationed.  When they do their jobs well they go unnoticed, because what they do is not sexy.  At the same time if they screw up it can be damaging for the country if overseas, or for the services if in the United States.

God bless all the Tom Allmon’s and Benjamin Sisko’s who deal with complex situations often in obscurity who through their patience, diplomacy and people skills care for their people, accomplish the mission and balance all within the confines of dealing with local communities and political nuances that most people cannot fathom.