Remembering Chernobyl, a Divided Europe and Looking to a Greener Future 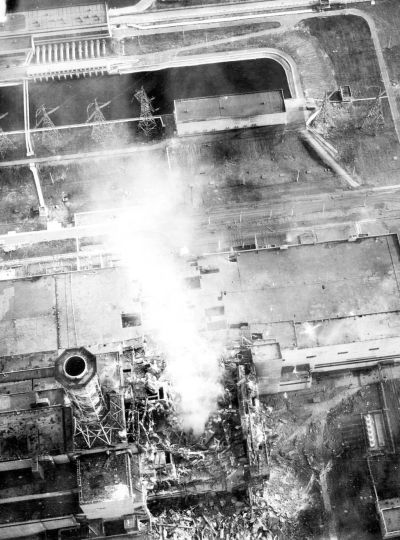 I was in Germany this week to testify at a military court-martial but besides the obvious stress of travel and watching a friend go through hell up close and personal, it was also a time for remembering other things.

In the course of our lives that there are events that help define history. At the time when they occur most of us are oblivious to their full impact.  On April 26th 1986 I was a young Army officer in Germany.  On that day the Chernobyl nuclear power plant in the city of Pripyat in the Ukraine which was then part of the Soviet Union experienced a catastrophic accident during a systems test.  The disaster is considered the worst in nuclear power disaster in history, only one of two to be rated as a 7 on the International Nuclear Event Scale.  31 deaths were directly caused by the mishap almost all of who were workers and emergency responders, another 50 emergency responders died of radiation exposure. Thousands of other incidents of death from cancers have been linked to the disaster.

Of course that was before there was the 24 hour cable news cycle so what little information we had was from newspapers and television. In Germany at that time we were pretty much dependent on the Stars and Stripes newspaper and news coverage from ABC, NBC, CBS and CNN provided by the one channel aired by the Armed Forces Network back then.  As such we knew that it was a bad situation but even with other coverage provided through German news sources, at least for us that red German our information was limited.  A lot was because of the fact that the incident occurred in the Soviet Union during the Cold War. Not much news got in or out of the USSR except that which was cleared by the Politburo itself.  Even Soviet citizens in the local area received little information, in fact no evacuation or alert was issued by Soviet authorities until April 28th.  We were advised to minimize outside exposure and keep our pets inside and out of grassy or wooded areas. 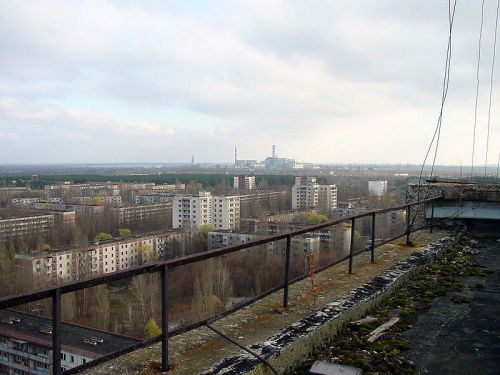 The disaster resulted in the evacuation of a 31 kilometer circumference around the reactor. This boundary still exists and the city of Pripyat remains an empty reminded of that day, abandoned and remaining much as it was that tragic day, a city frozen in time.  Ukrainian officials and scientists believe that the area will be uninhabitable for the next 20,000 years.  Effects are being felt in Belarus, Ukraine and many European countries to this day. 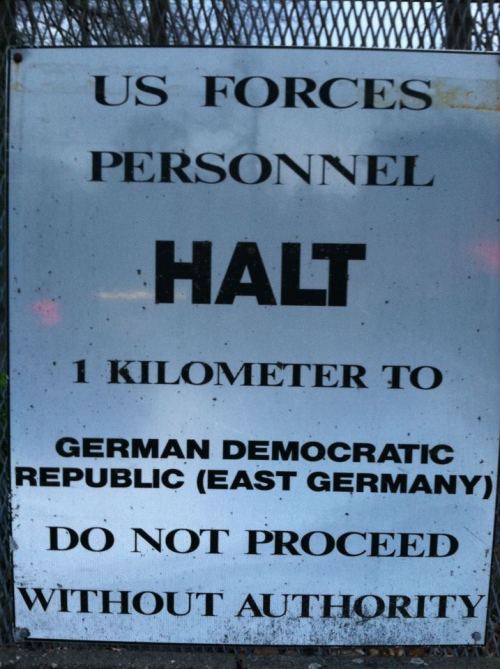 Back in 1986 Europe was divided by the Iron Curtain. Then Germany was two countries, the Federal Republic of Germany and the German Democratic Republic. I made a number of trips to the inter-German border as part of my duties to know the terrain that we would fight on should war break out and in November 1986 Judy and I would make the trip via the Helmstedt Corridor through East Germany to Berlin.  I was reminded about the division of Europe, particularly Germany by two mementos displayed near the front gate of Kelley Barracks. One was a piece of the Berlin Wall, the other a sign warning people of their proximity to the inter-German border.

Since then Germany has been reunified and is a prosperous country without which the economy of much of Europe would collapse. It is also a leader in eliminating the need for nuclear power and is in the process of shutting down its nuclear plants. It is a leader in reliable public transportation and alternative energy. In fact some of those alternative energy projects including solar and wind are helping the German economy with high tech jobs and I have to admit that air quality is amazing. The country is becoming less dependent on fossil fuels and cleaner to boot.

There are many that continue to insist that we in the United States should double down on our use of fossil fuels and nuclear energy despite the real environmental dangers of both and the economic stranglehold of OPEC on the United States.  When I look at Germany I wonder why we don’t take our great technical ability, our tremendous capacity for innovation and our now underused industrial power to make the change secure our freedom from the tyranny of OPEC and protect the environment.  There has to be big money to be made, money that could make us much more prosperous and a world leader in something other than arms sales.

But now days in the minds of some you are a socialist if you believe in reducing dependance of fossil fuels, nuclear energy and want clean air and water. The truth is that throughout our industrial period we have done some terrible damage to our environment mostly preventable.  We have made a  lot of progress but we could do better.   Here’s to a greener and more prosperous future.

Filed under ecology and energy, History