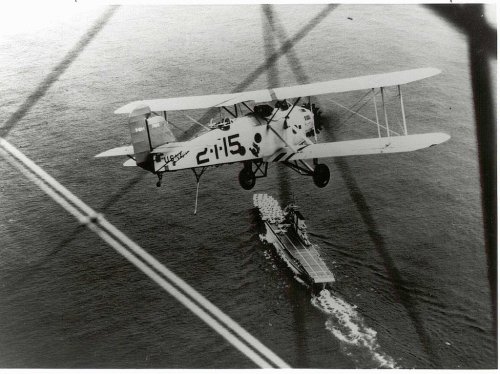 Note: This is the first in a series on the early aircraft carriers.  Two others will follow on the British and Japanese carriers.  My dad was a Chief Petty Officer in Naval Aviation.  As such I grew up around Naval Air Stations, Squadrons and of course Aircraft Carriers.  My dad retired off of the USS Hancock CVA-19 in 1974.  I spent two weeks underway on USS Coral Sea CV-43 as a NJROTC Cadet in the summer of 1976.  It was an experience that I will never forget.  While on the Cruiser USS Hue City CG-66 we deployed with the USS John F Kennedy CV-67 for Operation Enduring Freedom.  There is something about the power and majesty of the modern carriers at the same time there is a sense of timelessness in the first aircraft carriers.  Three of the first four American ships were converted from other platforms.  As a kid, a young adult and even now I am fascinated by all things Navy, especially ships that made history.  Here is my look at the first American Aircraft Carriers.

The United States did not invent the aircraft carrier although Eugene Ely flew an aircraft onto and off of the Armored Cruiser USS Pennsylvania on January 18th 1911.  It was the British Royal Navy which first built and operated aircraft carriers beginning with the HMS Furious which had been converted from a light Battle Cruiser.  The Royal Navy would covert the sister ships of the Furious, the Glorious and Courageous as well as the auxiliary ship the Argus before building their first carrier that was designed from the keel up, the HMS Hermes.     With the British building carriers and the Japanese following suit the United States began a program of aircraft carrier production and operation unmatched in history. 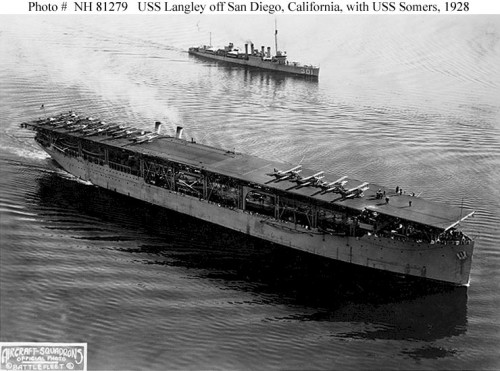 The first US carrier was the USS Langley, CV-1.  Langley was converted from the collier USS Jupiter beginning in July 1919.  She was commissioned as USS Langley CV-1 on 21 April 1920.  Displacing 15,150 tons fully loaded Langley embarked 34 aircraft and had a maximum speed of 15.5 knots.  Langley was primitive but groundbreaking.  She was the first carrier equipped with catapults and on 18 November 1922 achieved the first catapult takeoff by an aircraft.  She served as an invaluable training platform for Naval Aviators and helped provide the fleet with highly skilled flight crews that would operate from the USS Lexington and USS Saratoga.

Langley after conversion to AV-3

Nicknamed the “Covered Wagon” she served initially in the Atlantic until November of 1924 when she was transferred to the Pacific Battle Force.  She served as a carrier in the Pacific until 1936 when she was converted into a Seaplane Tender AV-3 and assigned to the Pacific in September 1939 based in Manila.  She was in the Philippines when the Japanese attacked and was sent south to Australia.  She was assigned to the ABDA forces defending the Netherlands East Indies and was sunk by her escorts after being bombed and disabled by Japanese aircraft while delivering fighter aircraft to Java with the loss of 16 sailors. 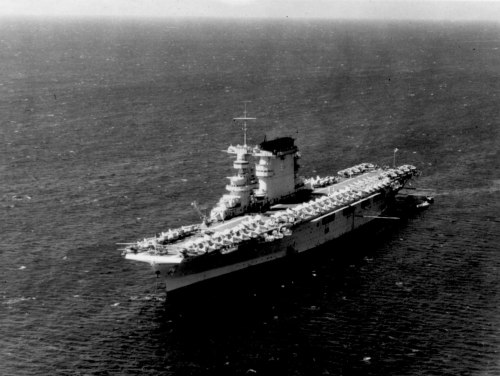 The second two American Aircraft Carriers were also conversions.  Unlike Langley the Lexington and Saratoga were converted from a new class of large and powerful battle cruisers whose construction had been canceled by the restrictions of the Washington Naval Treaty.  Commissioned on December 14th 1927 Lexington was 880 feet long and displaced 38,746 tons.  Saratoga was commissioned on November 16th of the same year and of similar dimensions and displacement.  Both of these ships could steam at 33.25+ knots and had a complement of 90 aircraft.  They were armed with eight 8” guns mounted in 4 turrets at the behest of more traditionally minded officers who felt that the armament might be needed for surface actions. 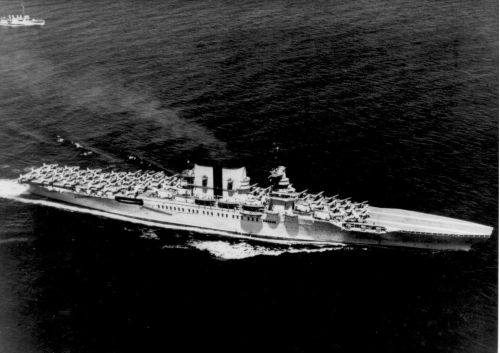 They were the largest American carriers built until the Midway class appeared inin late 1945 and early 1946.  Of other nations pre-war carriers only the Japanese Navy’s Akagi and Kaga, converted from a battle cruiser and battle ship for the same reason as a the Lexington’s were comparable in size, air group capacity, protection and speed. Saratoga’s 8”battery would be replaced by twin 5” 38 caliber mounts in 1942. 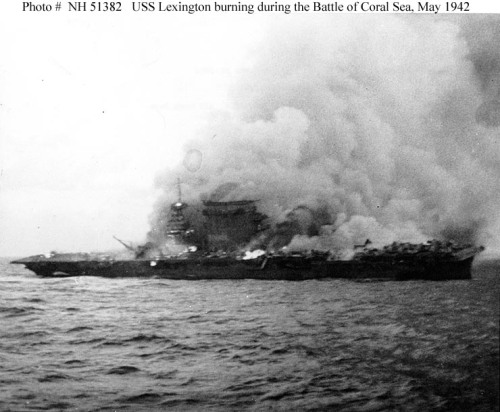 Both ships were used to help develop carrier doctrine and the concept of the carrier task force. Future leaders of Naval Aviation including Marc A. Mitscher trained aboard or flew from these ships.  Of particular note was that during Fleet Problem XIX in 1938 Saratoga launched a surprise air attack on Pearl Harbor from a point 100 miles off Oahu, setting a pattern that the Japanese copied in December 1941. 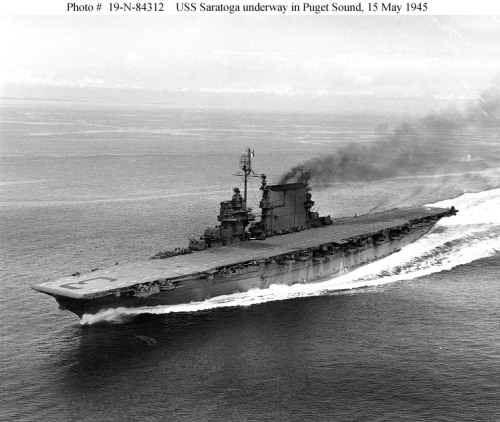 During World War II both helped hold the line after Pearl Harbor along with Enterprise, Yorktown and Hornet. Lexington was the flagship of TF-11 during as series of raids on Japanese outposts in the Solomons.  TF-11 joined Admiral Frank “Jack” Fletcher’s TF-17 at the Battle of Coral Sea, the first Naval Battle fought outside of eyesight of the respective forces. Lexington’s aircraft helped sink the Japanese light carrier Shoho on May 7th 1942 and heavily damage the fleet carrier Shokaku the following day. However aircraft from Shokaku and Zuikaku hit Lexington with two torpedoes and 3 bomb hits which her damage control parties seemed to have under control when vapors from ruptured aviation fuel lines were ignited resulting in a series of explosions which ignited uncontrollable fires. Her crew was evacuated by escorts and she was torpedoed by the destroyer USS Phelps.

Saratoga served throughout the war. She engaged in patrols after Pearl Harbor and while enroute to joining Enterprise was hit by a torpedo from the Japanese submarine I-16. After repairs she was rushed to Hawaii to join the American Task Forces at Midway but arrived in Hawaii the day after the battle.  Following this Saratoga operated in the Central Pacific in the first offensive at Guadalcanal.  She participated in the landings as the flagship of Admiral Fletcher and then at the Battle of Eastern Solomons sank the Japanese light carrier Ryujo and damaged the seaplane carrier Chitose.  Following this battle she was hit by a torpedo from the I-26. After repairs she again went to the Solomons joined by the light carrier USS Princeton.  On November 5th the two carriers conducted a brilliant strike on Japanese ships and aircraft facilities at Rabaul which were threatening the landings at Bougainville. 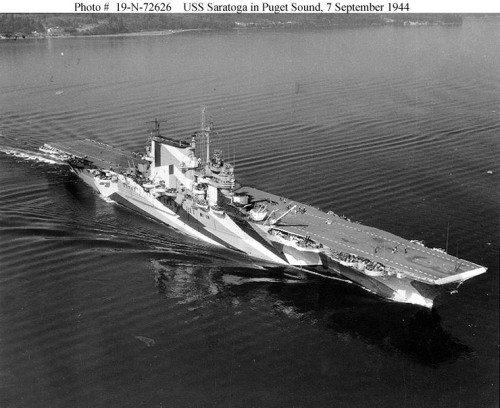 Following these operations Saratoga operated in the Gilberts and then with the British in the Indian Ocean.  She then was used as a training carrier for new pilots and aircrews at Pearl Harbor before being brought to Iwo Jima to operate night fighters against Kamikaze raids.  While conducting these operations she was attacked by Japanese aircraft in which 6 Japanese aircraft score 5 hits on her in 3 minutes.  Her forward flight deck was wrecked and she suffered great damage below decks and she lost 123 sailors. 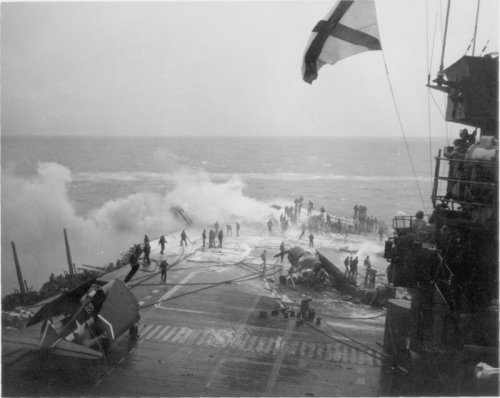 Saratoga burning after Kamikaze hits in 1945

Following repairs she resumed training duties and after the defeat of Japan was involved in Operation Magic Carpet to bring Servicemen back from overseas.  Surplus to Navy needs at the end of the war Saratoga was sunk in Operation Crossroads at Bikini Atoll by an underwater atomic blast in the “Baker” bomb test a mere 500 yards from her position. She sank 7 hours later. 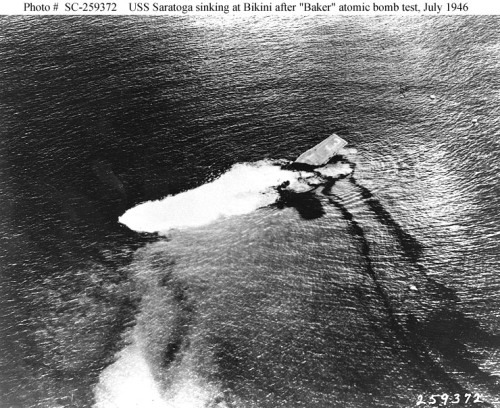 The End of an Era- Saratoga goes down at Bikini

5 responses to “The First Aircraft Carriers Part One: The First American Flattops- Langley, Lexington and Saratoga”