It was a hot day at Harbor Park but the bats of the Norfolk Tides were cold as the Tides dropped game two of their series against the Scranton Wilkes-Barre Yankees by a score of 4 -0.  Tides starting pitcher Brandon Erbe (0-5 6.66) had his best outing of the year pitching six innings and allowing just one run on three hits. Unfortunately for Brandon and the Tides Yankees starter Jason Hirsch (2-3 3.06) and relievers Royce Ring and Amaury Sanit shut down the Tides offense allowing just three hits. 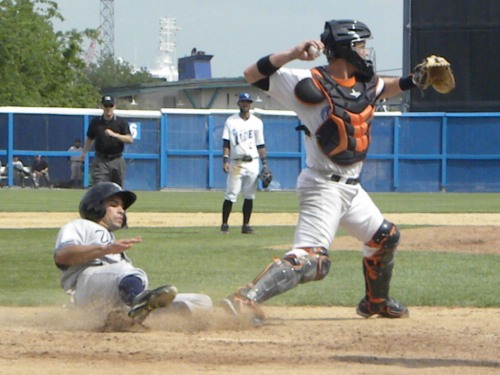 Erbe pitched his best game of the season giving up his only run in the top of the sixth inning when Kevin Russo tripled to right and scored on a soft ground ball to third that Tides Third Baseman Josh Bell could only go to first for the out.  Brandon worked out of the inning and was relieved by Koji Uehara making a one inning rehab appearance as he prepares to rejoin the Orioles at the conclusion of his rehab. Uehara allowed one hit but no runs facing four batters and making just 8 pitches of which 7 were strikes.  According to the Tides website there is a possibility of making another appearance in Monday’s game against the Yankees. 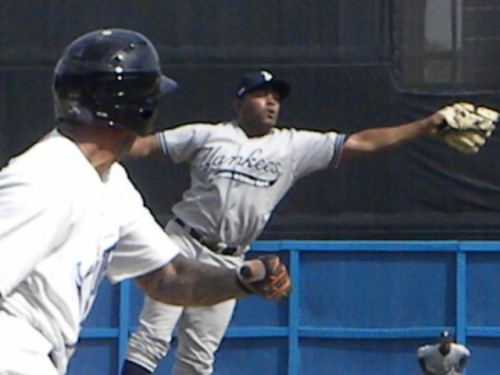 Kam Mickolio came on in the 8th inning and the big right hander struggled against the Yankees hitters. Kevin Russo singled and then Mickolio walked Reegie Corona.  With runners on first and second Eduardo Nunez laid down a bunt between the pitcher’s mound and third base. Mickolio fielded the ball and considered going to third to get the lead runner and then paused and attempted to get Nunez at first but the delay allowed all to be safe.  Juan Miranda then hit a ground ball to Scott Moore at second base and Moore came to the plate cutting down Russo. Catcher Adam Donachie threw to first attempting to get the double play but Miranda beat out the throw.  David Winfree a Virginia Beach native hit a soft ground ball to Josh Bell leaving Bell with only the play at first allowing Corona to score.  Mickolio walked Jesus Montero to re-load the bases.  Jon Weber then singled to right scoring both Nunez and Miranda and was replaced by Armando Gabino who struck out Chad Huffman.

The Tides could mount nothing else and the game ended with Erbe getting loss while having his best start of the season. One hopes that the next time he has such a performance that he will get some run support.

Meanwhile up in Baltimore the Orioles completed a sweep of the Red Sox when in the 10th inning Ty Wigginton doubled to drive in Nick Markakis giving the Orioles the win.  Former Tides pitcher Matt Albers got the win in relief of Kevin Millwood while Red Sox closer Jonathan Papelbon got the loss. The Orioles have won three in a row for the first time this season and swept the Sox for the first time since September of 1974.  Former Tides Outfielder Rhyne Hughes connected on a two out RBI double in the 4th inning. 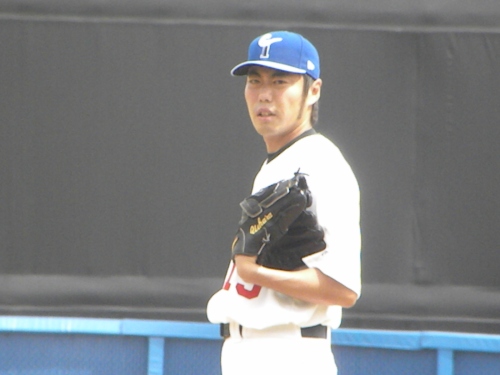 On Monday the Tides will face the Yankees in game three of their series and the Orioles will travel to Yankee Stadium to take on the New York Yankees.  Here in Norfolk weather permitting Chris Tillman (2-3 4.05) coming off two exception starts on the road including his no-hitter against the Gwinett Braves will face Yankees right-hander Ivan Nova (1-0 2.70).

See you are Harbor Park,