About 5:30 PM on January 28th 1986 I was a young Army Medical Service Corps 1st Lieutenant in command of the 557th Medical Company (Ambulance) which was based on Wiesbaden Air Base in Wiesbaden Germany. I was hoping to close out the day by 7PM which was early for me as well as most officers in the 68th Medical Group and 3rd Support Command of the Imperial Army on the Rhine.

I had a stack of work in my inbox, NCO evaluations, criminal investigations, maintenance reports and upcoming missions, not to mention trying to get a head start on my Unit Status Report. Most of my soldiers except those on duty had finished for the day.

Back then communications and television for military personnel stationed overseas was primitive. The Armed Forces Network had one channel then and only recently had added live needs feeds from stateside news programs on CNN and morning shows such as NBC’s Today Show. By 1986 the Space Shuttle missions had become routine but this one was different because of a school teacher, Christa McAuliffe who was a payload specialist on the flight.

The Challenger was making her 10th flight in less than 3 years having first flown on April 4th 1983.  The mission STS-51-L had been delayed due to weather on the 22nd and rescheduled several times due to weather or in one case due to problems with an exterior access hatch.  The morning of the launch the weather was predicted to be at or below the 31 degree minimum safe launch threshold. Engineers from the builder of the Challenger’s Solid Rocket Boosters (SRBs) Morton Thiokol contacted NASA with their concerns that the O-Rings which sealed the joints on the SRBs which they believed might not seal properly.  NASA engineers argued that even if the primary O-Ring failed that the secondary O-Ring would be sufficient even though this was an unproven theory. Eventually Thiokol management overruled their engineers influenced by NASA management which demanded that Thiokol prove that it was not safe to launch rather than prove that it was safe to launch. Considering it was a “Criticality 1” component meaning that there was no backup in case of a failure of both joints. It was a clear violation of protocol but the later Rogers Commission would show that NASA managers frequently ignored or evaded safety regulations to meet their very ambitious mission schedule. This decision doomed Challenger and her crew of seven.

I had heard that the Challenger was to launch that morning in Florida which of course was the early evening for us in Germany.  However I had seen numerous shuttle launches on television, considered them routine and by then rather uninteresting.  Since I was a very junior 1st Lieutenant commanding a company forward deployed with a mission to race to the Fulda Gap in the event of a Soviet invasion of West Germany up to my ears in work I had no interest in watching another one.

About 20 minutes until 6 my senior duty person at the company, the Charge of Quarters or CQ in Army parlance came to my door which was at the far end of the hallway from where the CQ was stationed. Specialist Lisa Daley was a solid medic and outstanding soldier who had a great personality that caused her to be well liked in the company.  She came to my door and blurted out “Lieutenant Dundas! The Space Shuttle just blew up!”

I looked up from my desk and I remember my words to this day. “Specialist Daley, Space Shuttles don’t blow up.” She then said, “No sir they do, it’s on TV right now!” That startled me. I grew up with the space program and remembered the Apollo 11 Moon landing. Although I remember the fire on Apollo 1 which killed three astronauts on the launch pad, but that was different, no American spacecraft had ever been lost though Apollo 13 was nearly lost while on a Moon mission.

I got up and followed her as she told me what had happened. While I reached the CQ desk I saw the small television which she and her assistant CQ were watching. There was a live feed from CNN replaying the disaster, the twin plumes of smoke careening across the screen.  I was stunned and will never forget the image that I saw with my soldiers that day.

Seventeen years after that event I was waiting at the Naval Air Station at Mayport Florida for General Peter Pace.  General Pace who was then the Vice Chairman of the Joint Chiefs of Staff was coming to be the guest speaker at the Battle of Hue City Memorial weekend hosted by the USS Hue City. I got to the ship early and while drinking coffee in the Wardroom saw the news of the breakup of the Space Shuttle Columbia. It brought back the images of the Challenger disaster. General Pace was delayed as the Joint Chiefs and National Security Council held an emergency meeting and arrived several hours late and when he arrived he spoke of the Challenger disaster along with the Columbia.

There are two more shuttle flights scheduled before the program ends this year. An era will be ever. The shuttles will pass into history and unfortunately for many the signature moment of the program will not be the many successes it will be the Challenger disaster and the images shown on CNN that cold and clear Tuesday in 1983. 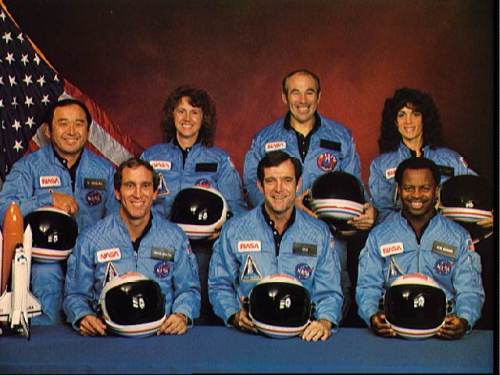 The brave astronauts of all of our space programs deserve our highest admiration. The Mercury, Gemini, Apollo and Shuttle programs pioneered space travel. We should not forget their sacrifices especially those that gave the last full measure especially those that we remembered yesterday. Ronald Reagan ended his short speech the evening of the Challenger’s demise with this line:

“The crew of the space shuttle Challenger honored us by the manner in which they lived their lives. We will never forget them, nor the last time we saw them, this morning, as they prepared for the journey and waved goodbye and ‘slipped the surly bonds of earth’ to ‘touch the face of God.’”

As a child I grew up with the space program and Star Trek. It is my hope that manned missions aboard better and more capable space ships capable of reaching the far reaches of this solar system and the galaxy will be built and humanity’s constant desire for exploration and discovery will herald a better future.