In 1941 with war raging inEuropeand the Japanese continuing their war in China  and occupied French Indo-China theUnited States rushed to build up its Naval Air Arm and the Arm Air Corps.  New models of aircraft of all types were being rushed into production to replace aircraft already known to be obsolescent.  The Navy brought aircraft already accepted into full production even as it planned more advanced models.  The events in Europe and Asia demonstrated that new fighter designs were needed quickly.

As 1940 dawned the standard fighter aircraft found on U.S. Navy carriers were the F2-A Brewster Buffalo, the Grumman F-3F biplane.  In February 1940 the Navy accepted its first F4F-3 Wildcat which in an earlier for had been rejected in favor of the Brewster Buffalo.  The new Grumman fighter was powered by a 1200 hp Pratt & Whitney R-1830-76 double row radial engine, mounted 4 .50 cal. Machine guns and was heavily armored.  It had a maximum speed of 331 mph range of 845 miles and ceiling of 39500 feet. This would serve it and its pilots well as they aircraft was incredibly tough, often amazing experienced Japanese pilots in their A6M2 Zeros in their ability to suffer heavy damage and remain in the air.  The plucky Wildcat would become the main line of defense in the Pacific against the advancing Japanese Imperial Navy in the months following Pearl Harbor. 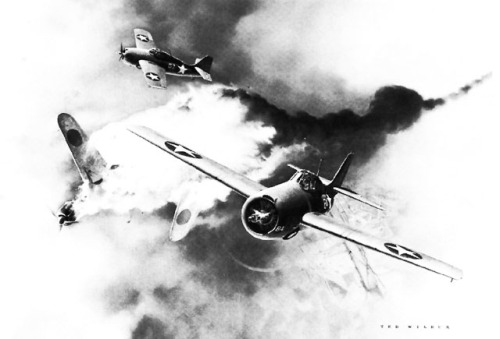 The early F4F-3s were superseded by the F4F-4 model which incorporated folding wings, additional armor and an extra two machine guns.  This decreased its maximum speed to 320 mph, rate of climb and ceiling but nonetheless the aircraft gave a good account of itself in Navy and Marine Corps service.  F4F-3’s and F4F-4s served in the British Royal Navy where it was called the Martlet until the end of the war.  When Grumman closed out F4F production in 1943 to concentrate on its replacement the F6F Hellcat production was continued by General Motors and Eastern Aircraft as the FM1 and FM2 Wildcat. The FM1 was identical to the F4F-4 but armament was reduced to 4 machine guns and bomb racks for two 250 lb bombs or depth charges were added.  The FM2 was based on an updated version of the F4F and had a more powerful engine as well as a higher tail assembly to account for the increased torque of the engine.  These aircraft served aboard the tiny Escort Carriers and performed valiantly, especially in the Battle off Samar during the Battle of Leyte Gulf.  A total of 7860 Wildcats of all varieties were built.  They accounted for 1327 enemy aircraft shot down with the loss of only 191 Wildcats. 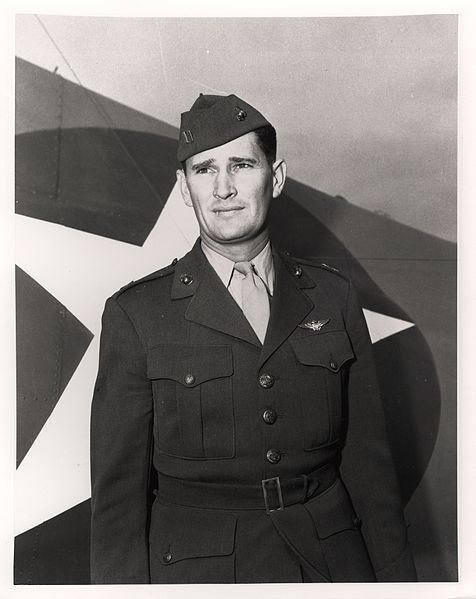 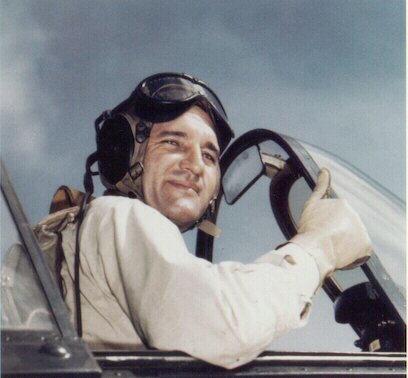 The top aces who flew the Wildcat were all Marines, CAPT Joe Foss (26 victories) MAJ John Lucian Smith (19 victories) and MAJ Marion Carl (16 victories in the F4F and 2 in the F4U Corsair). Foss and Smith both won the Medal of Honor.  Foss would go on to become Governor of South Dakota and the first Commissioner of the American Football League in 1959. Smith retired as a Colonel in 1960 and Carl as a Major General.  Other distinguished F4F aces included LT Butch O’Hare, the first U.S. Navy ace and Medal of Honor winner and LCDR Jimmy Thatch who developed the highly successful “Thatch Weave” which enabled the U.S.pilots whose machines were slower and less maneuverable than the speedy and nimble Zeros to achieve good success against their Japanese foe.  Thatch retired as an Admiral in 1967.  O’Hare rose to become commander of the Enterprise Air Group and was killed in action in November 1943. Chicago’s O’Hare International Airport is named for this brave aviator.

The Grumman F6F Hellcat took over front line fighter duties on the Fleet Carriers from the Wildcat in early 1943 and established itself as the dominant fighter in the Pacific Theater of Operations.  Although it had a resemblance to the F4F the F6F was a totally new design built on combat experience against the Japanese.  The aircraft was built around the powerful Pratt & Whitney R-2800 engine which produced 2000 hp.  The Hellcat mounted six .50 caliber machine guns and had a rate of climb of 3500 feet per minute and a 37300 ft operational ceiling.

Faster than the Zero and other Japanese fighters and piloted by more experienced pilots the Hellcats took a brutal toll of Japanese aircraft.  They accounted for more Japanese aircraft kills than any other with 5163 confirmed kills with a loss of 270 aircraft an overall 19:1 kill ratio. They were piloted by 305 Navy and Marine Corps aces including Meal of Honor winner Captain David McConnell the Navy’s Ace of Aces, and highest surviving United States ace of the war that scored all 34 of his victories in the Hellcat.  The greatest achievement of the Hellcats were when they swept the rebuilt Japanese Naval Air Arm from the skies in the Great Marianas Turkey Shoot. By November 1945 12275 Hellcats had been built with 1263 going to the British Royal Navy. After the war the Hellcat was replaced by the F8F Bearcat as the primary fighter and served in a night fighter and trainer role until the 1950s.  The French Navy used the Hellcat in to provide heroic close air support to beleaguered French Soldiers in Indochina.

Flying alongside the F6F was the Vaught F4U Corsair. The Corsair first flew in 1940 and the Navy was slow to adopt it due to difficulties in carrier operations and negative reviews of Navy pilots.  However Marine Corps aviators flying the Corsair had great success and legendary aviators like MAJ Gregory “Pappy” Boyington and VMF-214 the Black Sheep.  The Navy would adopt the aircraft later in the war as the Corsair’s carrier operation deficiencies were remedied, but its real success was a land based aircraft operated by the Marines.  Likewise the first squadrons to operate the aircraft successfully from carriers were the Marine Corps VMF-124 and VMF-213.

The Corsair mounted the same Pratt & Whitney R-2800 engine as the F6F but had a highly streamlined gull wing design as well as a turbo-charger which allowed it a top speed of 425 mph.  Later models such as the F4U-4 had a top speed of 445 mph. The F4F was armed with six .50 cal machine guns as well as rockets and a bomb load of 2000 pounds and the F4U-4 could carry 4000 pounds of ordnance.

Less than 10000 of the over 64000 combat sorties flown by F4Us were flown from carriers, the vast bulk of the sorties coming from land based Marine Corps squadrons.  The Corsair was often used as a fighter bomber where its capabilities to drop sizable amounts of ordinance including rockets, bombs and the nearly developed Napalm in a close air support role cemented the importance of Marine Air for future generations.  They were beloved by the Marine Corps and U.S. Army infantrymen in their brutal battles with the Japanese on many hellish island battlefields.  Corsairs accounted for 2140 confirmed kills during the war against a combat loss of 189 aircraft. The aircraft remained in production until 1952 with 12571 aircraft of all variants being built.  Many Japanese pilots considered the Corsair to be the best fighter of the war.

During the war many served in the British Royal Navy and Royal New Zealand Air Force with good success and after the war the French Navy had success with them in a close air support role in Indochina and Algeria.  Following the war the Corsair remained in service for many years in the U.S. Navy and Marine Corps as well as the French Navy and other smaller navies and air forces until the 1960s.

These amazing aircraft and the men that flew them established a tradition of excellence that the Naval Aviators of the U.S. Navy and Marine Corps continue today.

Filed under aircraft, US Navy, world war two in the pacific