The Real Danger of Revolution and Violence in our Country 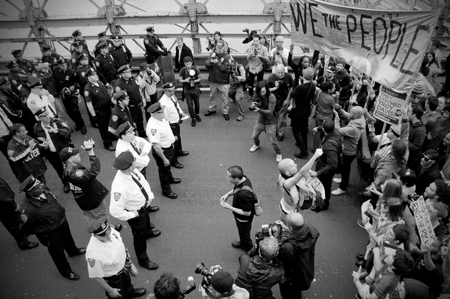 Occupy Wall Street and the Tea Party a Revolution is Coming 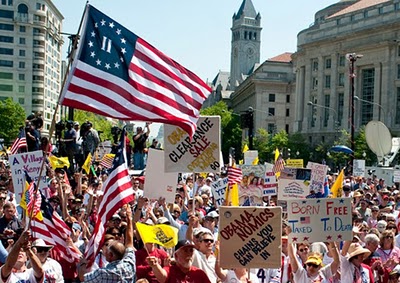 Since the economic crash of 2008 the United States has been in turmoil. The Republican administration of George Bush had made itself so unpopular that the Democrats led by the young and inexperienced Barak Obama took control of the White House and both houses of Congress.  However the new administration and its allies in Congress did nothing to help their cause promoting health care reform instead of addressing serious problems in the economy, especially unemployment. As the Obama administration floundered in its response to the economy and remained mired in the increasingly unpopular wars in Iraq and Afghanistana new political force came into being. This was the Tea Party movement a collection of social and economic conservatives, libertarians and other conservative groups backed by major business leaders and promoted by the Fox New Channel.

The Tea Party grew in prominence in the Republican Party at the local and state levels mobilizing voters as it took advantage of the discontent and fear felt by many conservatives.  The movement featured many patriotic images and some within the Tea Party used militant language to describe their goals including that of revolution to retake the power of government.  Liberal opponents likened the Tea Party to Nazis and today some Tea Party back members of Congress and Presidential candidates refer to the Occupy Wall Street protestors as anarchist and communists.

The Obama administration and many on the left dismissed the movement but by the 2010 mid term elections the Tea Party and their backers spearheaded the Republican taking of the House and nearly regained control of the Senate. Typically divided government has forced parties to work together and compromise to achieve their goals.  That did not happen in 2010. The Tea Party forced the hand of Republican leadership not to compromise with President Obama and the Democrats.  The near shutdown of the government in June only served to worsen the division.

The Tea Party mow distrusts many established Republican leaders as much as it despises the Democrats and as the division continued to grow a new movement came into being, the Occupy Wall Street campaign.  The Occupy Wall Street demonstrations began in September and were ignored by most of the media, just as the media outside of Fox News ignored or downplayed the incipient Tea Party in 2009. Now the demonstrations continue to gain strength and have spread to close to 90 cities.  Organizers and some commentators are referring to the movement as “the American Spring.”

However the Occupy Wall Street movement is quite diverse from those protesting many of the same things that the Tea Party stands against to those with a harder and revolutionary edge.  While the movement itself is somewhat amorphous and appears to be unclear on its goals the PR head of the movement commented in one interview that the goal is to “overthrow the government.” Other protestors carried an effigy of the head of the CEO of Bank of America on a pike in one demonstration. Still others have simply become a nuisance to those that live and work in the area of their protests.   Such statements and actions give their opponents like Glenn Beck all the ammunition that they need to demonize the protestors as Beck did today when he said “Capitalists, if you think that you can play footsies with these people, you’re wrong. They will come for you and drag you into the streets and kill you…they’re Marxist radicals…these guys are worse than Robespierre from the French Revolution…they’ll kill everybody.” Beck also suggested that the only way to stop the movement was a “forceful crushing from the top” which he compared to Hitler’s “Night of the Long Knives.”

Even the President has called his political opponents “enemies” and they have responded in kind. Of course Obama has been called everything but an American since he was elected by some on the right and many in his own party believe that he is nothing more than a pawn of business and the establishment.

Is it any wonder that people in the Tea Party andOccupy Wall Street are bringing their own variety of revolution to the nation?  The economy is in tatters and long term unemployment at highs not seen since the Great Depression. The country is deeply divided on religious and social issues, the role ad purpose of government and the majority of people we believe that we have lost the wars inIraqandAfghanistan.  This is a toxic and dangerous environment where it will not take much to bring about violence.

While many on the right and the left seek to frame the members of the Tea Party and the Occupy Wall Street in the most demonic ways that they can and fan the flames of hatred it is important to take a step back and see both movements in their current and historical context.  The temptation is to get caught up in the emotion of these “revolutionary” movements and proceed down the revolutionary way without thinking of the consequences of revolutions. Revolutions are inherently unpredictable and often bring unintended and sometimes tragic results.  Both movements have valid points and Washington, Wall Street and our political, media and business elites better wake up. Both have many good and law abiding people in them but both also have a people that would do everything that they can do in order to bring about change, if not at the ballot box on the streets.

During revolutionary times those on the extremes gain prominence and their movements grow most often at the cost of the middle. When the center disappears there is little to stop whichever side comes out on top from doing whatever they want.  The winners also have their losers as the most powerful or organized parties within a movement tend to crush opposition within their own ranks once they take power.

Unlike some I do not venture to have an answer for the long term ills of the country but I do not think revolution from the left or right is the way to solve them.  Revolutions tend to be rather messy and bloody affairs and as the rhetoric on the left and the right continues to escalate as the economic and world situation worsens the danger of armed conflict in this country grows greater every day.  In fact there are foreign powers such asIranthat are reveling in such a possibility with others quietly doing so.  Unfortunately I do not think that many people on either side of the divide see the danger looming in our future.

That is what scares me about the revolutionary rhetoric that is that things can spiral out of control when groups are massed on the street. Agitators from any side can create events that precipitate violence on the part of the demonstrators or the police and security forces.  Once in power revolutionaries frequently kill or exile members of their own parties as Hitler did with when he liquidated the leadership of his  SA Brown Shirts on the Night of the Long Knives.

This is a dangerous time and I do pray that our political leaders will regain their collective sanity before all hell breaks loose.  I re-posted a paper about the German Revolution of 1919-1922 in my last post to show some of the unpredictable ways revolutions can develop. You can read it below.