The Diamond Jubilee: All Glory is Fleeting 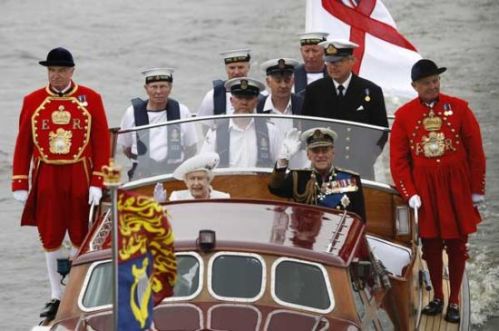 Whenever I see anything about Queen Elizabeth II, especially the grand celebrations that reverberate around the nations that at one time or another were the exploited subjects of the British Empire I am less than excited. Nothing against the Queen or her predecessors I am less than impressed by the tabloid  media spectacle that currently surrounds the House of Windsor. At one time the British monarchy meant something, it was the titular symbol of an empire that spanned the globe. It was the symbol of the world’s mightiest navy, and largest and most powerful economic system.  It was the symbol of a nation that had stood alone against Napoleon and Hitler, it was the symbol of stability in times of tumult that Britons of all political leanings could rally around. But it was a symbol, a symbol of a nation that pioneered the rule of law and rule by a government of the parliamentary majority in the House of Commons. While the monarch was and is the “Head of State” their influence since the 1701 Act of Settlement  has been mostly symbolic and the practical function of the monarch is limited to non-partisan activities such as granting honors and titles. 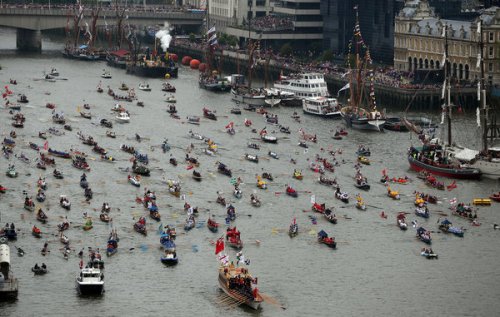 Today Queen Elizabeth reigns over a struggling nation and empire in name only. For much of her reign the Royal family has symbolized the decline of the empire with various members becoming the laughingstock of the world. While the Monarchy has recovered from the worst of its dips in popularity following the death of Princess Diana the the Royal family still surrounded by opulence and the splendor of history has with few exceptions seemed out of touch, indolent and irrelevant.  Some commentators have said that today’s “naval review” was important to give people a “sense of national pride at a time when the economy is in recession and people face deep austerity measures.” 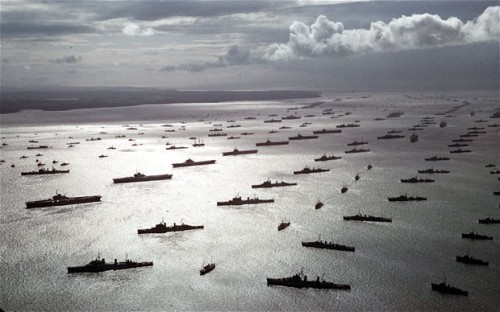 When I saw the news coverage of today’s “review” in the Thames I was happy for the Queen and how much it seemed to mean to a lot of the people present.  Yet at the same time I was saddened about the condition Britain. When King George VI, Queen Elizabeth’s father was crowned a real naval review showcasing over 200 warships from Britain and around the world were on display to pay honor to the new King. When Queen Victoria celebrated her Diamond Jubilee in 1897 165 ships of the Royal Navy were present. In the sense of history I found the motley collection of some 1000 small craft that paraded down the Thames to be less than impressive, a testament of sentimentality over substance, a triumph of merchandising rather than might. The presence of several dozen antique survivors of the Miracle of Dunkirk in 1940 in the parade was interesting and meaningful but it was a reminder of how a nation rallied to save its Army from certain annihilation in 1940 that said more about the British people than the current monarchy.

The British monarchy is in decline and even the question of succession provokes questions as to what shape and influence it will have in the future. The sad fact is that today’s parade on the Thames in honor of Elizabeth’s Diamond Jubilee is a celebration of past glory that provides momentary comfort to a nation is crisis. It is a reminder that indeed “all glory is fleeting.”

5 responses to “The Diamond Jubilee: All Glory is Fleeting”