“This is pitiful. A thousand people freezing their butts off waiting to worship a rat. What a hype. Groundhog Day used to mean something in this town. They used to pull the hog out, and they used to eat it. You’re hypocrites, all of you!” Phil Conners (Bill Murray) in Groundhog Day

Well it looks like we will have an early spring according to the rodent name Phil in Punxsutawney Pennsylvania, so even the rodent admits that Global Warming is a fact. Well maybe not, what does a Groundhog know about that? When did he go to science class and why are thousands of people waiting in the cold for his prediction? The good thing is, if the rat is right then Spring Training will be very nice, and maybe opening day will be free of winter weather.

I don’t know, but I do love the movie Groundhog Day. I have to admit there have been times in my life that I have felt that I was living it. When Bill Murray’s character Phil Conners asks “What would you do if you were stuck in one place and every day was exactly the same, and nothing that you did mattered?” I can say that there were times in my life that was exactly how I felt. I imagine that a lot of people, including some that read my articles that sometimes feel the same way.

I think that the movie is a great metaphor for life in our country in the instant news and media world that is modern America. Politics, economics, foreign policy, scandals, mass murders… You name it and it seems like we just saw it, like Yogi Berra said it is like “Deja Vu all over again.”

When we lived in Pennsylvania we had groundhogs all over the place, and since we lived on a military base most were undisturbed. Our first dog, a Wire Hair Dachshund named Frieda used to look at them like they were long lost cousins, but I digress… Groundhogs are fascinating rodents, but I don’t know how much credence that I give to their weather prediction ability, especially, like most weather forecasters and prophets they tend to disagree with each other more often than not. 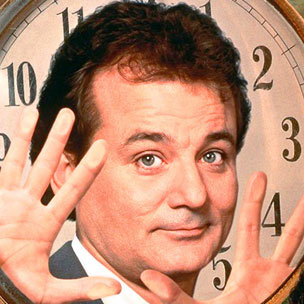 So happy Groundhog Day to you, may it be a day of new beginnings regardless of how long the winter continues.

Filed under Loose thoughts and musings, News and current events