Christmas at the Front 2013: A Look at Christmas Now and in Military History

Friends of Padre Steve’s World
Today I am taking the day off of writing. I read something today that though I knew the story reduced me to tears. It was the story of a German pilot who just a few days before Christmas 1943 spared a badly damaged American B-17 bomber and escorted it and its crew to safety. The pilots were reunited in the 1990s and I will write about it soon. But this is a timeless article about how soldiers have stopped the killing for at least a few hours or days to celebrate Christmas, sometimes with the men who were their enemies.
Have a nice night,
Peace,
Padre Steve+ 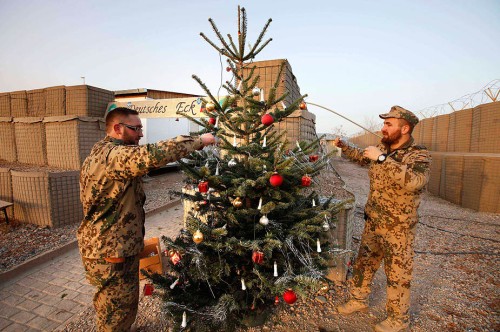 Today as on so many Christmas Days in days gone by military personnel serve on the front lines in wars far away from home. Today American and NATO troops engage a resourceful and determined enemy in Afghanistan. American Marines are working to safeguard the lives of Americans in South Sudan while French troops are intervening in Mali and the Central African Republic to attempt to prevent genocide. In many corners of the globe others stand watch on land, at sea and in the air. Unfortunately on this Christmas wars continue and most likely will until the end of time as we know it.

It is easy to understand the verse penned by Henry Wadsworth Longfellow in his song I Heard the Bells on Christmas Day after the death of his wife and wounding of his son in the US Civil War: