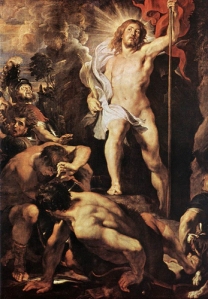 I am glad that Easter Sunday is over. Of course in my tradition, the Catholic-Orthodox-Anglican tradition, there are 49 more days left in the Easter Season, but who is counting?

I dreaded Easter this year, more than I ever have. I think it is because that for only the second time in my life, Easter Sunday coincided with my birthday. The only previous time that it did was in 2005, when I stilled lived in a cloud-cuckoo-land of unquestioned belief before I went to Iraq, before my crisis in faith, before I was cast aside by most of the clergy of my former church, and abandoned by men, fellow priests, chaplains, and clergy, who I thought were my friends. Interestingly enough, the current head of that church continues to stay in contact with me, and sent me a nice birthday greeting this morning. We may not agree on some of our theology, but I can respect and love him. For that I am grateful, and interestingly enough, many of those who I thought were my closest friends in that church,and in the military chaplaincy, abandoned it, just as they did me, because it wasn’t good enough for them either.

This year, for me, Easter became something existential. I did not think that I was going to live through it. Now, as far as I know there is nothing physically wrong with me that, and in fact I want to live, more than life itself. I want to live to be at least 105 years old so I can lead a staff ride on the 200th anniversary of the Battle of Gettysburg in 2063. I may need one of those hi-tech exoskeleton units to accomplish that should I live that long, but that is my goal.

I love life, but I struggle with faith. This week, in fact the whole season of Lent that preceded Holy Week was a struggle for me. Week after week I showed up to conduct services, to celebrate Eucharist, and no one came, until the last week of the previous class when one student came by. I was thrilled when it did, but truthfully, in the past two and a half years at the Staff College, my most faithful parishioners have been Lebanese Catholic officers, and there were none of them in the winter class. So despite the fact that we are kind of in a between class limbo, I was wondering, “why do I even bother to show up?”

I mean really… on Easter Sunday morning, my birthday to make matters worse, all I wanted to do was die. On the way home from work all I could feel was heaviness, and the only thing that kept me from driving my car off the road was that I didn’t want to put Judy through that pain. What I was feeling was not her fault; she had done all that she could to make this a good week and good birthday. I could not ask for more. But if you say you have faith, and have never been to the point of despair that I have been, please abstain if you can from judging me, and spare me your sermons.

Eventually, we got out to or friends at the Gordon Biersch brewery restaurant. After the horrible morning, the afternoon was good. My mood has lifted considerably. I have been treated with great kindness by hundreds of friends who have wished me well, by phone, e-mail, or on social media. Other friends were kind to me today. My Turkish friend at Biersch, his wife, made me a small cake; others were just kind to give me a hug, spend some time in conversation, or to share a laugh with me over a beer. While there I found that one of my friends here in Virginia Beach was in an automobile accident, and suffered some injuries this morning, and I pray, to the God that I so struggle to believe in, that he will be okay.

But that being said, I wonder at times, what Dietrich Bonhoeffer asked, is not true for me: “experience has made us suspicious of others and kept us from being truthful and open; intolerable conflicts have worn us down and even made us cynical. Are we still of any use?”

I admit that I have been worn down, that I am suspicious, and that I struggle. I wonder, as far as my calling and vocation as a minister, priest and chaplain goes, if I am of any use.

If I am, I am glad for that. If I have even helped someone in some small way, in his or her time of crisis, or doubt, I am glad for that. If not, then that is something to be decided not by me, nor by the Church, but by God, and such decisions are way above and beyond my pay grade. As far as the men that I feel who abandoned me when I struggled, and when my questions could no longer be tolerated; men who I did all that I could do to help to where they are today, and men who I thought were my friends and brothers; for that I have no answer. So I guess that too is well above and beyond my pay grade.

As far as yesterday morning, Easter Sunday, I guess I am glad that no one showed up at my chapel. I was so far from even believing, I was so far from the hope of the resurrection, that to cry out “Alleluia! He is risen! The Lord is risen indeed!” would have been blasphemy. So in a sense, as hard as today was, I was glad that I was spared from that.

When I thin that I am reminded of the words of he great German theologian Jurgen Moltmann;

“Believing in the resurrection does not just mean assenting to a dogma and noting a historical fact. It means participating in this creative act of God’s … Resurrection is not a consoling opium, soothing us with the promise of a better world in the hereafter. It is the energy for a rebirth of this life. The hope doesn’t point to another world. It is focused on the redemption of this one.”

I am hoping that this week will be better and that if anyone darkens the door of my chapel this coming Sunday, that I might actually join in the Easter alleluias. I want to experience that rebirth again, I want, not to simply assent to a dogma, but instead to participate in the creative act of God, and maybe to find redemption in this world whatever the next world may bring.

I hope that this makes sense, and even if it doesn’t, please, pray for me a sinner,

3 responses to “An Easter Alleluia?”