Walter Lord wrote this perceptive and prophetic comment about the Japanese attack on Pearl Harbor, “A nation brought up on peace was going to war and didn’t know how.” His words still resonate as most people have no idea about the reality of war. Despite terrorist attacks on major cites and unending war in the Middle East, Afghanistan, and parts of Africa, for most Americans and Western Europeans this is time of peace. Well, at least the illusion of peace.

Today tens of thousands of American, NATO and European Union troops operating in a number of mandates are in harm’s way. In some places like Afghanistan they are at war, in others attempting to keep the peace amidst a resurgence of the Taliban. Around the world regional conflicts, civil wars, insurgencies  and revolutions threaten not only regional peace but the world peace and economy. Traditional national rivalries and ethnic and religious tensions especially in Asia and the broader Middle East have great potential to escalate into wars that should they actually break will involve the US, NATO and the EU, if not militarily economically and diplomatically.

But, we live in a dream world an illusory world of peace, that entraps political leaders across the political spectrum. It is as W.H. Auden wrote in his poem September 1st 1939:

Defenseless under the night
Our world in stupor lies…

On December 6th 1941 the world was already at war and the United States was edging into the war. The blood of Americans has already been shed but for the vast majority of Americans the events in Europe and Asia were far away and not our problem. Though President Roosevelt had began the expansion of the military there were those in Congress seeking to demobilize troops and who fought all attempts at to intervene.

Most people went about their business that last furtive day of peace. People went about doing their Christmas shopping, going to movies like The Maltese Falcon staring Humphrey Bogart or the new short Tom and Jerry cartoon, The Night Before Christmas.

Others went to football games. UCLA and USC had played their annual rivalry game to a 7-7 tie, Texas crushed Oregon in Austin by a score of 71-7 while Texas A&M defeated Washington State in the Evergreen Bowl in Tacoma by a score of 7-0.

In Europe a Soviet counter-offensive was hammering a freezing and exhausted German Wehrmacht at the gates of Moscow. U-Boats were taking a distressing toll of ships bound for Britain including neutral US merchant ships and warships, including the USS Reuben James. American Airmen were flying as the volunteer Flying Tigers for the Nationalist Chinese against the Japanese invaders. 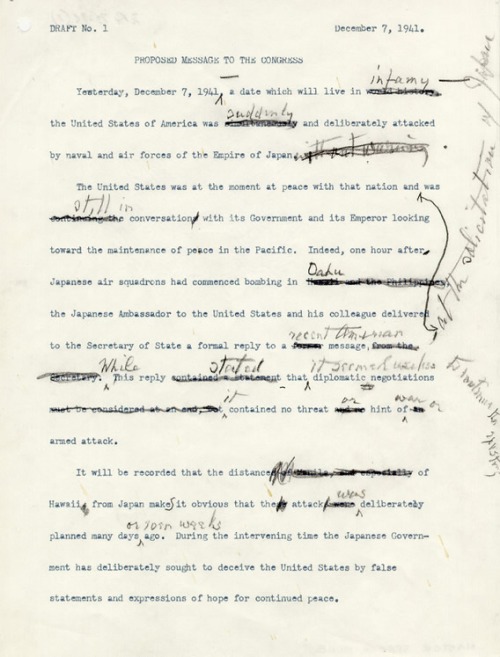 War was everywhere but there was still the illusion of peace. When the messages came out of Pearl Harbor the next morning it was already early afternoon on the East Coast. The Japanese Ambassador had been delayed in delivering the declaration of war, people across the country going about their Sunday business, going to church, relaxing or listening to the radio. Thus when war came, despite all the precursors and warnings war came. When it happened it took the nation by surprise. Walter Lord wrote in his classic account of the Pearl Harbor attack Day of Infamy: “A nation brought up on peace was going to war and didn’t know how.”

By the end of the day over 2400 Americans were dead and over 1200 more wounded. The battleships of the Pacific Fleet were shattered. 4 sunk, one grounded and 3 more damaged. 10 other ships were sunk or damaged in the attack. 188 aircraft were destroyed and 159 damaged.

The next day President Franklin D. Roosevelt called the nation to action requesting that Congress declare war on Japan.

Mr. Vice President, and Mr. Speaker, and Members of the Senate and House of Representatives:

Yesterday, December 7, 1941 — a date which will live in infamy — the United States of America was suddenly and deliberately attacked by naval and air forces of the Empire of Japan.

The United States was at peace with that Nation and, at the solicitation of Japan, was still in conversation with its Government and its Emperor looking toward the maintenance of peace in the Pacific. Indeed, one hour after Japanese air squadrons had commenced bombing in the American Island of Oahu, the Japanese Ambassador to the United States and his colleague delivered to our Secretary of State a formal reply to a recent American message. And while this reply stated that it seemed useless to continue the existing diplomatic negotiations, it contained no threat or hint of war or of armed attack.

It will be recorded that the distance of Hawaii from Japan makes it obvious that the attack was deliberately planned many days or even weeks ago. During the intervening time the Japanese Government has deliberately sought to deceive the United States by false statements and expressions of hope for continued peace.

The attack yesterday on the Hawaiian Islands has caused severe damage to American naval and military forces. I regret to tell you that very many American lives have been lost. In addition American ships have been reported torpedoed on the high seas between San Francisco and Honolulu.

Japan has, therefore, undertaken a surprise offensive extending throughout the Pacific area. The facts of yesterday and today speak for themselves. The people of the United States have already formed their opinions and well understand the implications to the very life and safety of our Nation.

As Commander in Chief of the Army and Navy I have directed that all measures be taken for our defense.

But always will our whole Nation remember the character of the onslaught against us.

No matter how long it may take us to overcome this premeditated invasion, the American people in their righteous might will win through to absolute victory. I believe that I interpret the will of the Congress and of the people when I assert that we will not only defend ourselves to the uttermost but will make it very certain that this form of treachery shall never again endanger us.

Hostilities exist. There is no blinking at the fact that our people, our territory, and our interests are in grave danger.

With confidence in our armed forces- with the unbounding determination of our people- we will gain the inevitable triumph- so help us God.

I ask that the Congress declare that since the unprovoked and dastardly attack by Japan on Sunday, December 7, 1941, a state of war has existed between the United States and the Japanese Empire.

Today thousands of US and NATO troops are deployed in Afghanistan, while others are advising Iraqi forces and Syrian rebels in the fight against the so called Islamic State. Some of them are dying in places that most of us do not care about in the least, so that others might have a chance at peace and a better life. Eleanor Roosevelt reflected:

“Lest I keep my complacent way I must remember somewhere out there a person died for me today. As long as there must be war, I ask and I must answer was I worth dying for?”

Wars, revolutions and other tensions in other parts of the world threaten on every side, but most Americans and Europeans live in the illusion of peace.  A very few professionals are given the task of preparing for and fighting wars that our politicians, business leaders, Armageddon seeking preachers and the talking heads of the media sow the seeds. As such many have no idea of the human, material and spiritual cost of war and when it comes again in all of its awful splendor few will be prepared.

We do not know what tomorrow will bring and unfortunately for the vast bulk of Americans and Western Europeans the comments of Walter Lord and W.H. Auden are as applicable today as they were on December 7th 1941 for our world in stupor lies…