The True Harbinger of Spring: Baseball and America in the Age of Trump 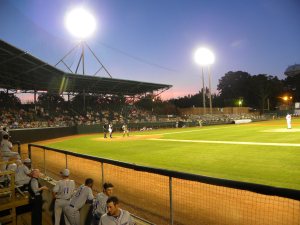 Nine days ago Punxsutawney Phil predicted another six weeks of Winter, but on Wednesday spring begins. Not the actual season of Spring but real spring, as pitchers and catchers begin to report to Baseball Spring Training. My long winter of dealing with the monotony of Up Armored Slowed Paced Rugby, also known as American Football is over. Thankfully during that period I did have European Football, particularly Bayern Munich of the German Bundesliga to help me through the winter.

Spring is a good thing unless you like me are very concerned with what happens on the Korean Peninsula following the Olympic Games in particular what is a very real possibility of war that easily through intent or miscalculation on the part of the North Korean, or maybe more so the Trump administration could escalate to to something that none of us want to contemplate; thus I can agree with Sharon Olds who wrote during the height of the Cold War, “Baseball is reassuring. It makes me feel as if the world is not going to blow up.”

This week is the true beginning of spring. I know that spring does not actually begin until March, but even so amid the continuing winter, spring is showing its first sign of dawning as pitchers and catchers reported to Spring Training. As Bill Veeck once said, “That’s the true harbinger of spring, not crocuses or swallows returning to Capistrano, but the sound of a bat on a ball.”

I grew up with a love for baseball that was cultivated by my late father, we didn’t always agree on much, but he imparted to me a love for the game that knows no bounds.

For me that is true. From the day the World Series ends I wait in anticipation for the beginning of Spring Training and I can agree with the great Rogers Hornsby who said, “People ask me what I do in winter when there’s no baseball. I’ll tell you what I do. I stare out the window and wait for spring.” Now don’t get me wrong I really love Soccer, I like Hockey, and American Football is just a diversion to hang out with friends over a beer, but in the end they are merely sports, were Baseball is a refuge with profoundly religious meaning to me. As Bryant Gumbel once said, “The other sports are just sports. Baseball is a love.”

I think that unlike so many other sports and entertainment that baseball has a healing quality that is good for society. Walt Whitman wrote, “I see great things in baseball. It’s our game — the American game. It will take our people out-of-doors, fill them with oxygen, give them a larger physical stoicism. Tend to relieve us from being a nervous, dyspeptic set. Repair these losses, and be a blessing to us.”

In a time like ours when the United States is wracked by the chaos of the daily Twitter rampages of President Trump and his defiance of all the norms of society, his disrespect for the Constitution, law, and simple human decency it is nice to remember that as Bill Veeck noted: “Baseball is almost the only orderly thing in a very unorderly world. If you get three strikes, even the best lawyer in the world can’t get you off.” I wish that was the case in Washington D.C. where the President and his gang of supporters in Congress and the Right Wing media is doing their best to re-write both American history as well as every political and society norm that has held the country together during even the most perilous times. They would be called cheaters in baseball, they are worse that baseball’s PED users because they are not just cheating they are trying to re-write the rules of the game to cover their misdeeds.

“(Barry) Bonds’ records must remain part of baseball’s history. His hits happened. Erase them and there will be discrepancies in baseball’s bookkeeping about the records of the pitchers who gave them up. George Orwell said that in totalitarian societies, yesterday’s weather could be changed by decree. Baseball, indeed America, is not like that…”

The only problem is that Will wrote that before Donald Trump. I just wonder if indeed Trump will succeed in changing the very fabric of the American experiment.

When I came back from Iraq the ballpark was one of the very few places that I could go and feel absolutely safe. There is something comforting in looking out over that beautiful diamond, smelling the freshly cut grass, the carefully manicured infield, and taking it all in. In fact for me tit still is one of my few truly safe refuges where war, terrorism, political and religious hatred, and the endless ideological battles of conservative and liberal pundits and politicians take a back seat, even those of Donald Trump. As the concerns of the moment fade away as I take in the beauty of that beautiful green diamond I find a peace that I seldom find anywhere else; and yes, that includes most churches where I find neither peace, nor God. Maybe that’s why I believe in the Church of Baseball. Unlike church there’s no guilt and it’s seldom boring.

I guess that is why it baseball matters so much to me, and why in spite of all the terror that the President triggers within my soul, that the seemingly insignificant act of pitchers and catchers reporting to Spring Training means so much. For me it is a symbol of hope.

5 responses to “The True Harbinger of Spring: Baseball and America in the Age of Trump”