The Businesslike Execution of Punishment adjusted for the Development of the Nation: A Visit to Flossenbürg Concentration Camp

Last week on our way from Munich to Berlin we stopped to visit the memorial at the site of the former Flossenbürg Concentration Camp. For most people it is best known as the site where Dietrich Bonhoeffer, Admiral Wilhelm Canaris, General Hans Oster and others implicated in the 20th of July plot to assassinate Hitler. However, the evil committed there was far greater than the execution of these outstanding men.

In May of 1938 the SS-Wirtschafts- und Verwaltungshauptamt or the SS Main Economic and Administrative Office constructed a labor camp for German political and other prisoners at the town of Flossenbürg near the Czech border in northern Bavaria. Directed by SS Gruppenführer Oswald Pohl, a former German Navy officer and paymaster. Already a dedicated Nazi, Pohl gave up his Navy career in 1933 to take a commission in the SS at the behest of Heinrich Himmler who desired to use Pohl’s military administrative experience to set up a more professional and efficient administrative branch. 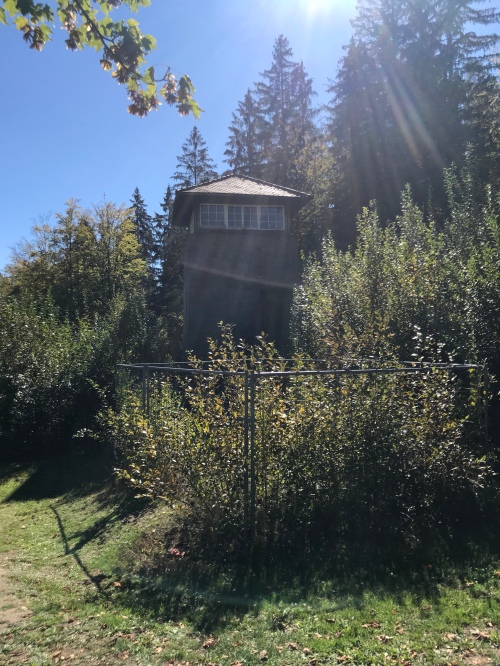 Pohl was the man for the job, and over time his influence grew. He was appointed to head the Hauptamt Haushalt und Bauten or the Main Office for Budget and Construction, and over time his responsibility continued to grow. German historian Heinz Höhne who wrote of Pohl:

Four potent departments placed Pohl’s hand firmly on the levers of power in the SS empire: he was in charge of the entire administration and supply of the Waffen-SS; he controlled the 20 concentration camps and 165 labor camps; he directed all SS and Police building projects; he was in charge of all SS economic enterprises.

But in 1938 Pohl was just beginning his rise in the SS. He realized that the Concentration Camps could be used for economic reasons as well as the punishment of the Reich’s enemies. Himmler appointed Pohl to oversee the economic and business operations of the camps. In March of 1938 they began at Mauthausen in Austria by partnering with the SS operated German Earth and Stoneworks Corporation (DEST) excavate Granite using Slave labor. In May they did the same at Flossenbürg. 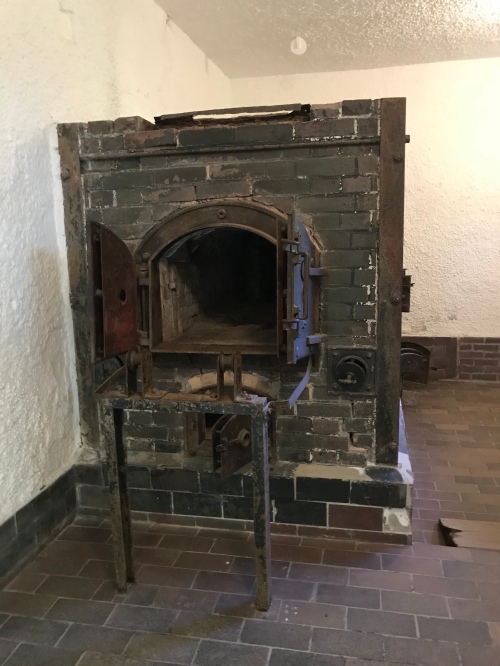 Pohl’s understanding of labor was thoroughly Nazi, he wrote:

“SS industries [Unternehmen] have the task…to organize a more businesslike (more productive) execution of punishment and adjust it to the overall development of the Reich.” 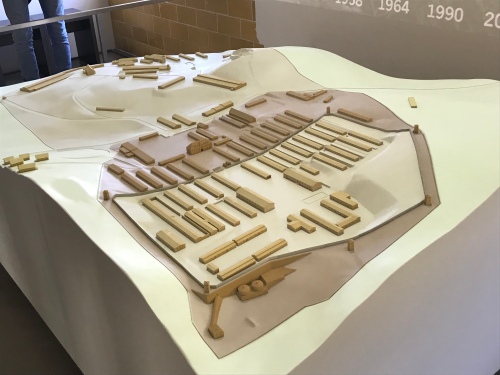 Flossenbürg’s prisoners initially worked in the granite quarry above the town. They, like other slave laborers were exploited and even the more pragmatic views of Pohl’s office in terms of exploitation were based on the policies of extermination. As time went on Pohl developed a formula to base the economic profits of each prisoner. This was based on the “rental” of each prisoner to industry, minus food and clothing, the profits from anything left by them when they died, minus the expense of the cremation, based on an expected lifespan of nine months as a slave laborer. Pohl expected a profit of about 1,630 Reichsmarks per inmate employed as a slave laborer.

Flossenbürg was one of the second generation camps designed to be more than a place of extrajudicial punishment for enemies of the Nazi regime. It was designed for economic exploitation and extermination through work. While the initial inmates were Germans it would become a place where people from eighteen nations were worked to death.

Like Mauthausen, Flossenbürg supplied laborers to DEST which ran the quarry. The quarry is still in operation, though most of the work is done by machines run by very few actual well paid workers. The machines can be heard from the grounds of the former camp.

The camp grew and so did the numbers of prisoners, especially from countries conquered by the Nazis. Germans who made up the majority of the prisoners from its opening until late 1940 were eclipsed by Poles, Russians, and Hungarians. By the end of the war the camp had housed about 100,000 prisoners, of which about 30,000 died or were executed there.

As the number of deaths rose the process to dispose of the remains of the victims required that a crematorium be constructed. It was built in a valley at the base of the camp and ashes were disposed of near it in what is known as The Valley of Death. Those killed not only included those inmates who were worked to death, died of starvation or disease, but also the Polish and Soviet prisoners of war killed on the orders of the regime. 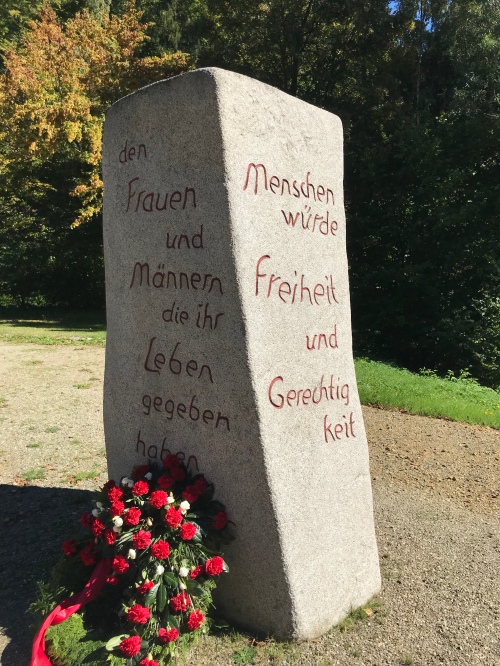 In 1943 the Messerschmitt facility in Regensburg moved parts production for the Bf-109 fighter plane to Flossenbürg. Camp inmates became part of the workforce producing those parts as well as other munitions for the German armaments industry.

The camp was liberated by the American 90th Infantry Division on April 23rd 1943.

The camp memorial is off the beaten track for most people. Visitors must make a special point to visit it. Unlike Buchenwald, Dachau, or Bergen-Belsen it is quite isolate from places that most people would go. Even so there are a significant number of Germans, and other Europeans, especially young people, who go to the camp to learn. In addition to the museum there is an education program with seminar rooms, guest speakers, and speak alike programs. A number of buildings have been preserved including the Camp Administration building, the Detention building where the special prisoners were housed, the laundry and camp kitchen which house the museum and special exhibits, the crematorium, two guard towers, and the SS Officer Club, or Casino. The last houses the education center as well as a small cafe for visitors.

In The Valley of Death near the crematorium there is what is called the Pyramid of Ashes, the Square of the Nations, and a cemetery. Above them are a chapel dedicated to the victims and a Jewish memorial. 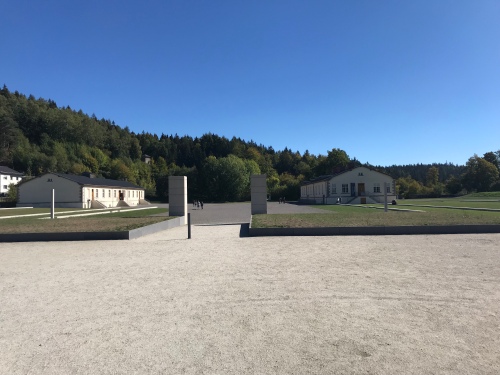 For me I think that the most powerful images I will remember are The Valley of Death and the courtyard outside of the Detention barracks where Bonhoeffer, Oster, and Canaris were executed. The SS Camp doctor wrote the only account of the death of these men:

“On the morning of that day between five and six o’clock the prisoners, among them Admiral Canaris, General Oster, General Thomas and Reichgerichtsrat Sack were taken from their cells, and the verdicts of the court martial read out to them. Through the half-open door in one room of the huts I saw Pastor Bonhoeffer, before taking off his prison garb, kneeling on the floor praying fervently to his God. I was most deeply moved by the way this lovable man prayed, so devout and so certain that God heard his prayer. At the place of execution, he again said a short prayer and then climbed the steps to the gallows, brave and composed. His death ensued after a few seconds. In the almost fifty years that I worked as a doctor, I have hardly ever seen a man die so entirely submissive to the will of God.”

That being said, while Bonhoeffer, Oster, and Canaris resonate with me I cannot ignore the fate of the 30,000 other men and women who died at Flossenbürg. They were victims of the Nazi policies on race and men like Pohl who extracted the last bit of profit they could make off of the lives and labor of their prisoners before they killed them.

Unfortunately with humanity being what it is and the desire to seek profit and power over the good of people what happened at Flossenbürg could happen again. There are men like Oswald Pohl today who would not hesitate to try to make a profit off of so called enemies of the state.

That is why we always have to remember what happened there and fight to ensure that it can never happen again.