The Pinnacle Of Obsolescence: The Unbuilt Battle Cruisers Of the 1920s and the Supercarriers of the 2020s? 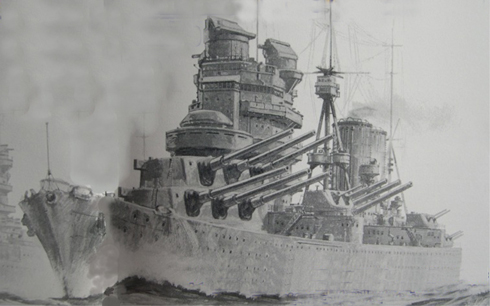 This weekend I will be reflecting on the old year and the coming new year, but tonight I decided to tweak and republish an article from about four years ago dealing with the battle cruisers being built by Great Britain, Japan, and the United States after the First World War. They represented the pinnacle of naval design for their era and would have been far superior to their adversaries had technology and war remained static. As Admiral Ernest King noted:

“Nothing remains static in war or military weapons, and it is consequently often dangerous to rely on courses suggested by apparent similarities in the past.”

As the First World War ended a new Naval Race was heating up. The United States had announced its intention during the war to build a navy second to none while Imperial Japan was making plans for a fleet that would give it superiority in the Western Pacific. The British, though still be far the largest naval power in the world were burdened by the massive costs of war and empire, but also seeking to maintain their naval dominance and to that end they were in the process of building a class of massive super-Dreadnought battleships, and Battle Cruisers.

The ships known as battle cruisers were first built by the British Royal Navy as a compliment to the all big gun Dreadnought battleships. The Battle Cruiser concept was for a ship of roughly the same size and firepower as a Battleship but sacrificing protection for greater speed, endurance and range.  and Japan joined in the Battle Cruiser race before and during the war. Unlike Britain the United States had concentrated on building battleships but following the war began to design and build its own class of massive battle cruisers. 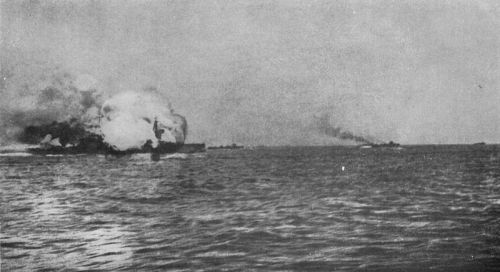 HMS Invincible Blowing Up at Jutland

During the war the weaknesses of the type were exposed during the Battle of Jutland where three British Battle Cruisers, the HMS Invincible, HMS Indefatigable and HMS Queen Mary blew up with the loss of most of their crews; of the 3311 officers and sailors on the ships only 26 survived. The HMS Lion was almost lost in a similar manner but the heroic actions of her crew saved her from her sisters fate. The British ships had glaring deficiencies in armor protection and the arrangement of their ammunition magazines and hoists which certainly contributed to their loss. Their German counterparts on the other hand proved much tougher and though all sustained heavy damage while engaging British Battleships and Battle Cruisers, only one the Lützow was lost. She absorbed over 30 hits from large caliber shells and only lost 128 crew members. 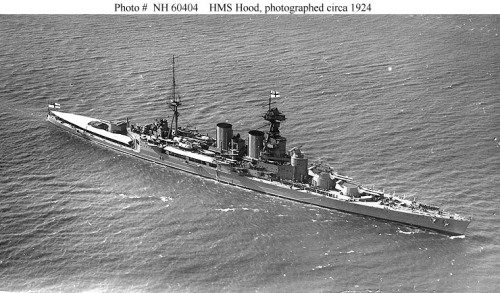 As the war progressed other Battle Cruisers were built, the British launched the HMS Repulse and HMS Renown and completed the HMS Hood shortly after the war was over. The Japanese built the four ship Kongo class from a British design, the first of which, the Kongo was completed in a British yard. As the powers embarked on the next Naval Race planners and naval architects designed ships of massive firepower, better protection and higher range and speed. All would have been better classed as Fast Battleships.

The British designed and began construction on the G3 class in 1921, while the Japanese began work on the Amagi Class, and the United States the Lexington Class. However the construction and completion of these ships as Battle Cruisers was prevented by the Washington Naval Treaty.

The treaty, which was ratified in 1922 limited the United States and Great Britain to a maximum of 525,000 tons in their battle ship fleets and 125,000 tons in aircraft carriers.  The Japanese agreed to a limit of 315,000 tons and the French and Italians 175,000 tons each. Tonnage for battleships was limited to a maximum of 35,000 tons with a limitation on guns size to 16 inches.  Since the bulk of the ships planned or being built by the US and Japan exceeded those limits they would be effected more than the British whose post war shipbuilding program had not begun in earnest, in fact the G3 Class had just been approved for construction.

The G3 class would have comprised four ships and been similar to the N3 Class Battleships. They were very well balanced ships and would have mounted nine 16” guns in three turrets on a displacement of 49,200 tons and deep load of 54,774 tons. They had an all or nothing protection plan meaning that the armored belt was concentrated in vital areas around the armored citadel, conning tower, turrets and magazines and engineering spaces. Their armor belt would have ranged from 12-14 inches, deck armor from 3-8 inches, conning tower 8 inches, barbettes 11-14 inches, turrets 13-17 inches and bulkheads 10-12 inches. Their propulsion system of 20 small tube boilers powering 4 geared steam turbines connected to 4 propeller shafts would have produced 160,000 shp with a designed speed of 32 knots.

The four ships, none of which were named were ordered between October and November of 1921. Their construction was suspended on November 18th 1921 and they and the N3 Battleships were cancelled in February 1922 due to the limitations of the Washington Naval Treaty. Many concepts of their design were incorporated in the Nelson Class battleships which were a compromise design built to stay within the limits of the treaty.

Amagi Class as Designed, Akagi as Completed (below)

The four planned Japanese Amagi Class ships would have mounted ten 16” guns on a displacement of 47,000 tons at full load. Their propulsion system 19 Kampon boilers powering four Gihon turbines would have given them a maximum speed of 30 knots, They would have had less protection than the G3 ships being more of a traditional Battle Cruiser design. As a result of the Washington Naval Treaty the Japanese elected to convert two of the ships, the Amagi and Akagi to aircraft carriers. Amagi was destroyed on the ways during the great Tokyo earthquake and Akagi was completed as a carrier. The other two vessels were scrapped on the ways. 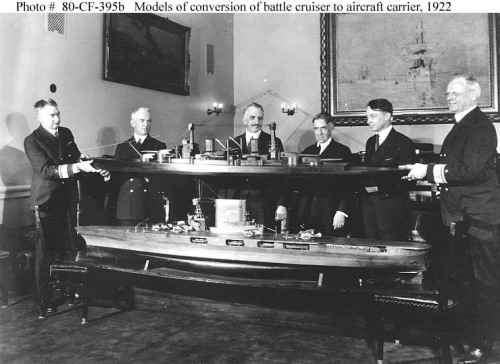 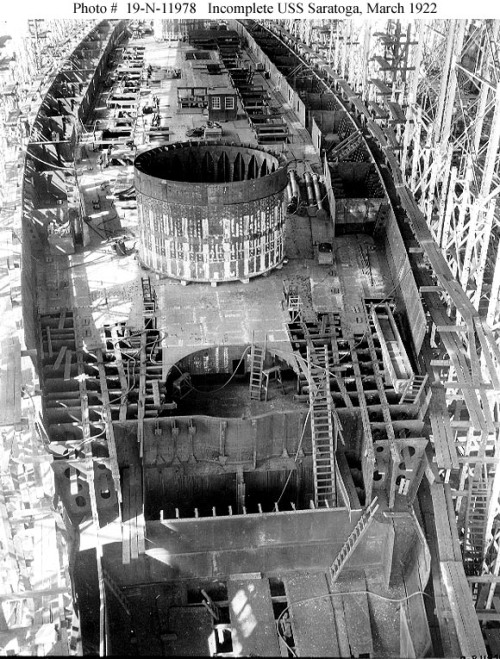 The United States Navy planned the six ship Lexington Class. These ships would have mounted eight 16” guns on a ship measuring 874 feet long and 105 feet in beam, displacing 43,254 tons at full load, or nearly the size of the Iowa Class battleships. They would have had a maximum speed of 33 knots being powered by 16 boilers which drove 4 GE electric turbines producing 180,000 shaft horse power. Theirs was a massive engineering plant and while the class did not have as heavy armor protection as either the G3 or Amagi classes, they were superior to them in speed as well as endurance. Upon ratification of the Washington Naval Treaty four of the six ships were cancelled and the remaining two, the Lexington and Saratoga competed as aircraft carriers.  Had any of the ships been completed as Battle Cruisers it is likely due to their speed that they would have operated primarily with the the carriers that the US Navy built during the 1930s.

One can only speculate what the navies of World War II would have looked like had the Washington and the subsequent London Naval Treaties not been ratified. One can also only imagine how the war at sea would have been different had the ships completed as carriers been completed as Battle Cruisers.

However that was not to be, of the planned 14 ships of these three classes only three were completed, all as aircraft carriers, ships that helped to forge the future of naval operations and warfare for nearly a century. Thus the uncompleted ships are an interesting footnote in naval history yet have their own mystique.

Yet nothing remains static. The massive aircraft carriers which have ruled the seas since the Second World War are not necessarily invincible and depending on how technology progresses could be heading into obsolescence, and end up serving in support roles or being paid off. Perhaps to meet some missions smaller and cheaper carriers will be developed, or existing platforms modified to carry more capable aircraft as the Japanese are doing with their Izumo Class “Helicopter Destroyers.”

Thus, one might wonder if the large new aircraft carriers currently being built by the United States, Britain, China, India, and other nations will also be displaced by advancing technology as were the battlecrusiers of the 1920s. It is a question that must be asked. There are certainly arguments for them, but what would the effect be on the United States Navy if one of the Nimitz Class carriers was sunk by the Chinese? My guess is that it would be the same kind of shock that hit the Royal Navy after Jutland, and the U.S. Navy after Pearl Harbor.

11 responses to “The Pinnacle Of Obsolescence: The Unbuilt Battle Cruisers Of the 1920s and the Supercarriers of the 2020s?”