A Return to My Tipperary 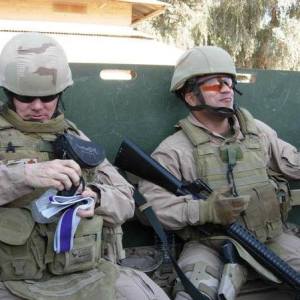 Today I am a bit tired and going to post so,etching that basically is a rerun. Ten years ago today I stepped off a plane with the man who had been my body guard and assistant for the past seven months in Iraq. War had changed me more than I had every imagined that it would. Even though I was physically home I wasn’t and over the next decade the war remained with me, and in some ways it still does.

I have written about my struggles with what I sometimes describe as the “Demons of PTSD” and while I am doing much better now than even two years ago I still suffer from it. But being a historian has allowed me to find connections to other men who have suffered from their experience of war, came home changed, and struggled for their existence in the world that they came home to.

The words of those men have helped me to frame my experience even in the darkest times often in ways that my faith did not. One of the things that I struggled with the most and still do is sleep. When I was conducting my research on the Battle of Gettysburg I got to know through biographies and their own writings a good number of the men who fought that battle who are now remembered as heroes. One of these was Major General Gouveneur Warren who has shattered by his experiences during the war. He wrote to his wife after the war: “I wish I did not dream that much. They make me sometimes dread to go to sleep. Scenes from the war, are so constantly recalled, with bitter feelings I wish to never experience again. Lies, vanity, treachery, and carnage.”

About every year around this time I feel a sense of melancholy as I reflect on war and my return from it. Today I was reading a number of George Santayana’s Soliloquies in England, in particular one entitled Tipperary which he wrote in the time shortly after the war. I think that the first time that I heard the song was when I saw a Charlie Brown special where Snoopy as the World War One Flying Ace alternates between happiness and tears as Schroeder plays the song on his piano.

In Santayana’s soliloquy he comments on the wounded officers that he sees singing the song in a coffee house and he wonders if they understand how different the world is now. I love the song, the chorus is below.

“It had been indeed a long, long way to Tipperary. But they had trudged on and had come round full circle; they were in Tipperary at last.

I wonder what they think Tipperary means for this is a mystical song. Probably they are willing to leave it vague, as they do their notions of honour or happiness or heaven. Their soldiering is over; they remember, with a strange proud grief, their comrades who died to make this day possible, hardly believing that it ever would come ; they are overjoyed, yet half ashamed, to be safe themselves ; they forget their wounds ; they see a green vista before them, a jolly, busy, sporting, loving life in the old familiar places. Everything will go on, they fancy, as if nothing had happened…

So long as the world goes round we shall see Tipperary only, as it were, out of the window of our troop-train. Your heart and mine may remain there, but it s a long, long way that the world has to go.”

In the same work Santayana mused on the nature of humanity and war, making one of his most famous observation “only the dead have seen the end of war.”

In the United States we live in a world where war is an abstraction and the vast majority of people have no clue about it or its cost. When I hear the American President make wild threats of war and the cavalier attitude of his sycophants toward it I realize that Santayana was right, only the dead have seen the end of war.

When I returned to the United States in 2008 it was incredibly hard to readjust to life in a country that knew not war and I was reminded of the words of Guy Sajer in his book The Forgotten Soldier. Sajer was a French Alsacian of German descent who spent nearly four years fighting as an ordinary infantry soldier on the Eastern Front. When he returned home he struggled and he wrote:

“In the train, rolling through the sunny French countryside, my head knocked against the wooden back of the seat. Other people, who seemed to belong to a different world, were laughing. I couldn’t laugh and couldn’t forget.”

A similar reflection was made by Erich Maria Remarque in All Quite on the Western Front:

“I imagined leave would be different from this. Indeed, it was different a year ago. It is I of course that have changed in the interval. There lies a gulf between that time and today. At that time I still knew nothing about the war, we had been only in quiet sectors. But now I see that I have been crushed without knowing it. I find I do not belong here any more, it is a foreign world.”

I have to admit that for the better part of the past decade when I get out of my safe spaces I often feel the same way. I don’t like crowed places, confined area, and other places that I don’t feel safe in. When I am out I always am on alert, and while I don’t have quite the hyper-arousal and hyper-vigilance that I once lived with, I am much more aware of my surroundings and always plan an escape route from any public venue that I happen to find myself. Likewise, I still deal with terribly physical nightmares and night terrors, more than one in the past month.

As I read and re-read Santayana words I came back to his observation of the officers that he saw in the coffee house and I could see myself in them:

“I suddenly heard a once familiar strain, now long despised and out of favour, the old tune of Tipperary. In a coffee-house frequented at that hour some wounded officers from the hospital at Somerville were singing it, standing near the bar; they were breaking all rules, both of surgeons and of epicures, and were having champagne in the morning. And good reason they had for it. They were reprieved, they should never have to go back to the front, their friends such as were left could all come home alive. Instinctively the old grumbling, good-natured, sentimental song, which they used to sing when they first joined, came again into their minds.

It had been indeed a long, long way to Tipperary. But they had trudged on and had come round full circle; they were in Tipperary at last.”

I too am now in my own Tipperary on this side of the Atlantic. I have been reprieved, at least temporarily,  but as Santayana noted  “it s a long, long way that the world has to go.”

Filed under faith, History, iraq, middle east, Military, remembering friends, shipmates and veterans, to iraq and back, Tour in Iraq