Thoughts on 36 Years of Commissioned Service

Thirty-six years ago, on the 19th Of June 1983, about 15 of my Army ROTC classmates and I were commissioned as Second Lieutenants in the Active Duty Army, the Army Reserve, or National Guard. Now, thirty-six years later I am the last one on active duty. A number still serve in DOD civilian status, others have retired from the military, and others transitioned to civilian life sometime during the intervening time.

My life since I was commissioned has being as a Medical Service Corps active duty platoon leader, motor maintenance officer, NBC Defense officer, Company Executive Officer and Commander, before becoming a Medical Personnel officer at a Medical Group and later the Adjutant for the Academy Brigade, Academy of Health Sciences, at Fort Sam Houston, Texas. While there I helped write the Army’s personnel policies on personnel infected with HIV and AIDS, which helped change my views on those infected with this horrible disease, and my acceptance and support for LGBTQ people, not just in the military.

I, [name], do solemnly swear (or affirm) that I will support and defend the Constitution of the United States against all enemies, foreign and domestic; that I will bear true faith and allegiance to the same; that I take this obligation freely, without any mental reservation or purpose of evasion; and that I will well and faithfully discharge the duties of the office on which I am about to enter. So help me God.

When I left active duty to attend seminary in the fall of 1988 I entered the Texas Army National Guard, still,serving as a personnel officer, but with a branch transfer to the Armor Branch. Later the State Chaplain found that a seminary student was serving as an Armor officer and had me transferred to the Staff Specialist Branch, for Chaplain Candidates, for which there is no paper trail in existence even though I attended the Chaplain Officer Basic Course the following summer. Until I became a Chaplain in October 1992 I was officially listed as a Medical Service Corps or Armor officer.

I continued on as a Chaplain in the Texas Army National Guard, then Virginia before being promoted to Major and transferred to the Army Reserve in West Virginia in December 1995. In June 1996 I was mobilized to support the Bosnia operation, OPERATION JOINT ENDEAVOR. I supported the operation from Germany, filling in for forward deployed Chaplains at the Würzburg Army Medical Center, the 4th Battalion, 3rd Air Defence Artillery, and as the base chaplain at Leighton Barracks in Kitzingen, before returning home to find that my contract position at a local hospital had been terminated when I was deployed and a man I had trained had been hired as a full time permanent employee.

Within two weeks of my release from my mobilized service I was activated to serve as the Garrison Chaplain for Fort Indiantown Gap, Pennsylvania, about 18 miles east of Harrisburg. The Gap was on the Base Realignment and closure list for 1998 and I was the last Federal Chaplain before it was transferred to the Pennsylvania National Guard. When we shut it down my tour ended, but I had been able with the support of my Commanding Officer, the Active Duty Army, and the Pennsylvania Army National Guard to keep the chapel program going. When done I went back to be the Group Chaplain for the 38th Ordnance Group, in Cross Lanes, West Virginia. However, without a civilian job to go home to it was difficult as we lived off of savings and drill pay.

Just before Christmas of 1998 I got a call from my former bishop in my former church that the Navy had hit a recruiting crisis for Chaplains and was willing to deal. Since I was a Major, a controlled grade, the the Army wouldn’t take me back into active duty. However, the Navy allowed me to resign my Army commission and enter the Navy the same day, with a reduction in rank. I was commissioned as a Navy Chaplain on 9 February 1999 and before the end of the month was on active duty.

After Chaplain School I was assigned to the 2nd Marine Division where served with the Second Combat Engineer Battalion, the 1st and 3rd Battalions, 8th Marine Regiment, and finally Headquarters Battalion, 2nd Marine Division. I was the Division Chaplain’s “relief pitcher.” When a Chaplain got in trouble and was removed, or when one was transferred unexpectedly, I got sent in. I was a Headquarters Battalion on September 11th 2001 following a deployment to the Western Pacific with 3rd Battalion 8th Marines. In December I was transferred to the USS Hue City and shortly thereafter deployed in support of Operation Enduring Freedom. Following that deployment, in which I served as an “advisor” on a boarding team and participated in 75 missions on interred tankers and merchant ships found in violation of U.N. Sanctions against Iraq.

When I transferred to Marine Security Forces in Norfolk in October 2003 my battalion commander put me on the road one to three weeks a month to Europe, the Middle East, Asia, and various locations stateside in support of Marine Security Forces. During that tour I was Promotes to Lieutenant Commander, and then assigned to Navy EOD Group Two, from which I was deployed with my assistant to Iraq in July 2007 in support of American advisors to Iraqi Forces In Al Anbar Province. That was a life changing experience. Suffering from severe PTSD and mild TBI I returned to the States in a mess. My next assignment after EOD was at the Naval Medical Center Portsmouth. I found that I was working 60-80 hours a week, and occasionally more in our ICUs and as the one call Chaplain to try to make my PTSD better. It didn’t work. I fell apart. My PTSD as well as physical injuries took a toll on me. Though I was selected for Commander the day after I found out that my dad had died of Alzheimer’s disease, things were never the same. Despite that, during those tours I had completed the Marine Corps Command and Staff College, earned my qualification as a Fleet Marine Force Officer, and completed a Masters Degree in Military History.

I had decided to speak up about my struggles with PTSD, and questions with the church I was then ordained by, I found that I was pretty much abandoned by my old church and the Chaplain Corps. I was short toured at Portsmouth and sent on a geographic bachelor assignment as the department head of the Pastoral Care Department at Camp LeJeune, Naval Hospital where I spent three years. The economic cost was great and the emotional cost to Judy and me greater.

I a rare stroke of fortune my detailed got me assigned to my dream assignment as an instructor and chaplain at the Joint Forces Staff College. If I couldn’t be operational and out with the troops at least I was instructing, teaching, researching, and back in academia. I spent 3 and 1/2 years there teaching Ethics and leading the Gettysburg Staff Ride.

After I left the Staff College I have struggled. I was assigned as the Command Chaplain and Joint Expeditionary Base Little Creek Fort Story. I have found that despite the massive budget increases in DOD that the base, Medical, and support side of the house are being gutted. My billet used to be an O-6, or Navy Captain billet. There were more Chaplains, more enlisted support staff, and contract personnel, and that is not just on the religious ministries side of the house. We are short of critical staff and security measures across the board. After almost two decades of war the Navy is attempting to sharpen the point of the spear but the shaft is rotten and about to fall apart.

I have good people to work with, quality Chaplains and enlisted personnel and contractors who do a great job, but I expect unless something radically changes that my work, and the work of Chaplains decades before me will be for naught. Supposedly there are more deep cuts coming, despite the increases in the overall Defense Budget. My friends in Navy Medicine confirm that more deep cuts are probably coming to Navy Medicine.

As for me, I have been assured that by the time I retire next April that my knees will be fixed. So I will be able to retire, and once I figure out what my retirement pay + disability + VA benefits + post retirement earnings then Judy and I can plan on selling our current townhome and getting a ranch house that won’t fuck with our knees, and allow us to have an office for me, an art studio for her and a guest room. 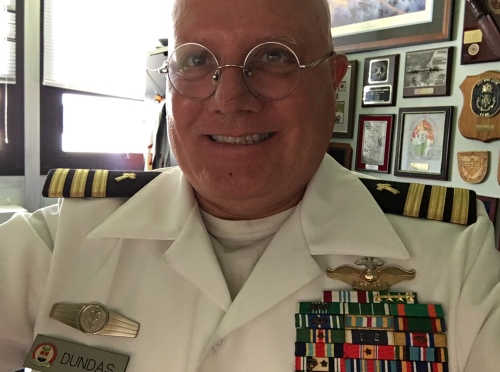 By this time next year, unless the President gets us in a war and triggers a stop loss I will be retired, and back in the civilian and academic world full time, and with that ranch house with enough room to be able to enjoy it, with our puppies. By the way if you want a nice, good sized townhouse with great neighbors in Virginia Beach, let me know.

By the way, it takes a lot of really good people to get someone like me through such a long and often difficult career. First among them is my wife Judy, who was and still is there every step of the way. Likewise all the men and women that I have served alongside, either as a subordinate, equal, or superior during my career.

To all of you who have walked this path with me on the blog the past decade, thank you.