To Boldly Go…. Binge Watching Star Trek the Next Generation from the Beginning and Wondering About Possibilities not of This Earth 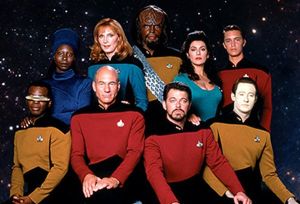 I have always been what some would call a Trekkie. Ever since I was a young child watching Star Trek the Original Series I have been fascinated with space, other universes, galaxies, and other life that must exist beyond earth. As a Christian and theologian I have to admit that the possibilities of a non earthnocentric order fascinate me. Christians, especially pastors, and theologians love to talk about the attributes of God: his omniscience, his power, his omnipresence, ad infinitum, but instead of contemplating the unknown potentials of a universe that we know little about, our puny minds remained focused only on earth and ways in which to destroy it in order to ensure the Apocalypse arrives, I cannot do that.

While obviously as a Christian I have to live fully in this world, and in doing so bear witness of Jesus the Christ, fight for equality and human rights, and do my best to bear witness of the truth, that human beings can be among the most noble as well as debased beings that have ever existed. There are certainly examples in the Judeo-Christian Scriptures to support both extremes, and theologians who those who support the total depravity of humanity, or an exalted view of humankind.

But, as Dietrich Bonhoeffer so succinctly noted:

The fact is, that we human beings are stuck in that uncomfortable middle, and to admit that is a step on the road to freedom. That is what I find so fascinating about Star Trek the Next Generation, it confronts human nature with the added dimension of the possibility, if we don’t destroy ourselves first, that we will meet others from other solar systems and galaxies.

In the finale of Star Trek the Next Generation, the being known as Q discusses that question with Captain Picard:

Capt. Picard: I sincerely hope that this is the last time that I find myself here.

Q: You just don’t get it, do you, Jean-Luc? The trial never ends. We wanted to see if you had the ability to expand your mind and your horizons. And for one brief moment, you did.

Capt. Picard: When I realized the paradox.

Q: Exactly. For that one fraction of a second, you were open to options you had never considered. That*is the exploration that awaits you. Not mapping stars and studying nebulae, but charting the unknown possibilities of existence.

I really do believe that being open to options that we never considered is both a part of the Christian life, as well as humanity in general.

I certainly don’t have the answers, but I am am open to answers that lie beyond my realm of sight and thought. There are times that I think that I was born 300 years too late for the Enlightenment and probably at least 300 years too soon for the world of Star Trek, I am caught in that uncomfortable middle that Bonhoeffer spoke of, but in the middle of the middle.

But for now I have 171 more episodes of Star Trek the Next Generation to go, then on to Star Trek Deep Space Nine, and Star Trek Voyager.