I Heard the Bells on Christmas Day: a Haunting Song of Hope in Trump’s America 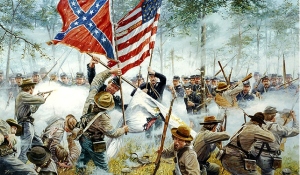 I could be writing about the travails being inflicted on the country and the world by President Donald Trump, but I do enough of that. Christmas is coming and even when I don’t explicitly write about Trump the message of the season stands against him and against all that he stands, despite his Court Following of Evangelical Christian Leaders, and his Cult of badly compromised Conservative, Evangelical, Charismatic, Pentecostal, and Catholic followers, who choose him over Christ on a daily basis.

I cannot be part of that despite what such people call me on social media and in comments I will not approve on this blog. Christmas of 2019 comes amid social and religious turmoil not seen since the 1850s that led up to the American Civil War. The rhetoric across the politic spectrum is becoming more uncompromising, and especially in the case of Trump supporters tinged by threats of violence, and even killing political opponents, and this is condoned by supposedly Christian people. Trump demands their fealty and they willingly give it.

I such times I reach back to history and often music that came out of that tumult.

“God is not dead, nor doth He sleep; The wrong shall fail, the right prevail With peace on earth, good will to men.”

Christmas is coming and I feel that Longfellow’s words are as pertinent today as when he first penned them. The thought of what is to come in the next few years, in the United States and in many other liberal democracies bodes ill for our future as authoritarian and often xenophobic leaders like Trump rise to power. The world that we grew up is is passing away, and what comes in its place, a dystopian world where hope will be a rare commodity beckons.

Longfellow’s words became the heart of the song I Heard the Bells on Christmas Day.  I have heard it a number of times in the past few days and each time it really touches me.

The song has been recorded in a number of versions by different artists over the years. However, the words of the song go back to the American Civil War. Longfellow on Christmas Day 1863 following the serious wounding of his son Charles, a Lieutenant in the Union Army at the Battle of New Hope Church during the Mine Run Campaign (not to be confused with a battle of the same name outside Atlanta in 1864) and the death of his wife in a fire two years before. Longfellow had much to despair about, but he maintained a faith in God, as well as the founding principles of the United States.

Longfellow’s words are haunting. Probably because they demonstrate the profound tension that lies at the heart of the Incarnation, which is the heart of Christmas and the Christian faith. the tension, played out so well in the song is the existence of a message of peace and reconciliation in a world where war and hatred of many kinds rip human beings apart coupled with the tragic inability of Christendom, especially American Conservative Evangelicalism to even come close to the message of Christmas.

I heard the bells on Christmas day

And wild and sweet the words repeat

I thought how, as the day had come,

The belfries of all Christendom

Had rolled along th’ unbroken song

The reality of this is seen in the third verse. It is a verse that echoes throughout history and seems to be true even today, in fact it seems to be the most real as we deal with war, hatred, terrorism, killing in the name of God, and political fratricide.

And in despair I bowed my head

“There is no peace on earth,” I said,

“For hate is strong and mocks the song

Of peace on earth, good will to men.”

The interesting part about the songs as opposed to the poem is that they omit three of Longfellow’s verses that admittedly in a reunited country would not help record sales. Those verses speak to the heart of the Civil War.

Till ringing, singing on its way,
The world revolved from night to day,

A voice, a chime,

Then from each black, accursed mouth
The cannon thundered in the South,

And with the sound

It was as if an earthquake rent
The hearth-stones of a continent,

But Longfellow hears in the bells something more powerful. It is the message of Christmas and the incarnation. The message that justice and peace will finally embrace.

Then pealed the bells more loud and deep:

“God is not dead, nor doth He sleep;

The wrong shall fail, the right prevail

With peace on earth, good will to men.”

Till ringing, singing on its way

The world revolved from night to day,

A voice, a chime, a chant sublime

As wars rage in the Middle East, tensions rise in Asia, Africa and even Eastern Europe while the Unholy Trinity of Politicians, Pundits and Preachers, led by the American President rage as we go into another, and even more perilous year with the possibility of nuclear war more probably than not, people still look for hope.

Longfellow, who lost so much in a short time in the midst of a terrible Civil War, reminds us that in such times, “God is not dead, nor doth He sleep; The wrong shall fail, the right prevail With peace on earth, good will to men.”

In a time like this when the world led by the American President seems to be hurtling into the abyss, it is important to remember Longfellow’s words and the message of Christ and the Incarnation. The child born as an outcast in a manger would die as a criminal, crucified by an occupying power with the full support of the leaders of the occupied country. As the German theologian Jurgen Moltmann wrote:

Yes, the wrong shall fail, and the right prevail, but it in the age of Trump it will certainly involve much travail. As for the travail, it is just beginning.

6 responses to “I Heard the Bells on Christmas Day: a Haunting Song of Hope in Trump’s America”