Do You Believe in Miracles? The Miracle on Ice at 40

However, in spite of the fact that good news is not always as memorable as tragedy, there was a sentinel event in my life where a group of unknown US college hockey players accomplished something that has never been forgotten, at least by those alive then. If you were alive then, and had some conscious memories, you probably remember exactly where you were and what you were doing when it took place.  Of course I am speaking about the victory of the US hockey team, Team USA over the Soviet team at the 1980 Winter Olympic Games, in Lake Placid New York.

Forty years ago today I was a 19 year old college sophomore in Stockton, California. I had grown up with hockey. When my dad was stationed in Oak Harbor Washington while serving in the Navy, while I was a child from 1965 through the end of 1969 I grew up with the weekly broadcast of “Hockey Night in Canada” on the Canadian Broadcasting Network.  When we moved to Long Beach my dad would take my brother and me to see Los Angeles Kings games, and then when we moved to Stockton, he would take us to see the California Seals in Oakland.

While in Stockton I played in a youth hockey league for a couple of years, playing defenseman, occasional right wing and for 4 games, a goalie when our goalkeeper was injured.  As a goalkeeper I went 2 for 2 in those four games and can tell you that there is almost nothing as frightening as having a 2 on 1 or one or two man breakaway coming at you full bore.  Goalies are a special breed and I don’t think that I would want that kind of pressure on me to make a living, being through combat and dealing with life and death situations is hard enough. Great goalkeepers, be they in hockey or soccer have my utmost respect.

So hockey to a lesser extent than baseball has been a part of my life for a very long time.  I remember watching my first Winter Olympics when I was in Stockton back in 1972.  Back then Team USA was nothing more than a bunch of American college kids playing teams of Warsaw pact professional all-stars from powerhouse teams such as the Soviet Red Army team.  The Soviets had dominated the international tournaments since 1956, and with the exception of the US Gold Medal team of 1960 had won every Olympic gold medal, and in 1980 were once again expected to win Olympic Gold.

But in 1980 times were tough in the United States. The country was suffering from double digit inflation, 20% interest rates, a gas crisis, economic recession, the residual effects of the Vietnam War, and the humiliation that the Iranians were inflicting on the United States on a daily basis following the seizure of the US Embassy in Tehran by “students” during the seemingly  unending hostage crisis.

The Soviet invasion of Afghanistan was yet another thumb in the eye of the United States.  As the United States prepared to host the Winter Games at Lake Placid New York there was not much to cheer about.  The country was mired in political crisis, as the sitting President Jimmy Carter was continually at odds with his own Democratic Party and appeared weak in dealing with the Soviets, their satellites, and the Iranians.  When he made his “malaise” speech in July 1979 I was in the UK touring as a spotlight tech with a Christian singing group and the reaction by the Brits and other Europeans was ridicule of the President and pity for the United States.  The United States had hit bottom, despite the fact that he was speaking the truth.

When it came to the Olympic hockey tournament, no one expected much from the U.S. national Team, with the exception of head coach Herb Brooks.  Brooks and his collection of college players, a number of whom would later become stars in the NHL, began their time together inauspiciously conducting a 61 game exhibition tour against teams from around the world.  In the final game on February 9th 1980 the Americans faced the Soviets at Madison Square Garden and were handily beaten by a score of 10-3 by the Soviet team.  The Soviets on the other hand had enjoyed nothing but success against NHL teams with Soviet teams going 5-3-1 against their NHL counterparts, the best professional teams in the world. The previous year a Soviet team had shut out an NHL All-Star team 6-0. 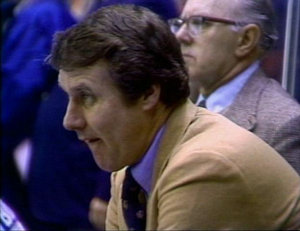 When the Olympic completion began the Soviets, as was expected dominated their opponents in the preliminary round going 5-0 and outscoring their opponents 51-10.  The United States surprised everyone tying Sweden 2-2 with a last minute goal and then stunning a highly favored Czech team 7-3 before defeating Norway, Romania, and West Germany to advance to the medal round.

Brooks practiced the team hard as they prepared for the Soviets who they were scheduled to meet in the opening round of the medal competition. A loss for the Americans would force them to play for Bronze and no one expected the Americans to defeat the might Soviet team. Yet when the day came, the Lake Placid Field House was packed with 8500 fans decked out in Red White and Blue, with American flags displayed everywhere. In the area the crowd was spontaneously singing “God Bless America.” But because the Soviets refused to allow a later start time, the game was not televised live nor broadcast live on the radio in the States.

On February 22nd I had finished work making and rolling pizza dough at Shakey’s Pizza in Stockton, went home showered and then got in my car to head over to Judy’s house.  On my way over I was listening to the radio when ABC radio broke in to air final few seconds of the game live, as Al Michaels made the famous call “Eleven seconds, you’ve got ten seconds, the countdown going on right now! Morrow up to Silk. Five seconds left in the game. Do you believe in miracles? YES!”

The Soviets lead 3-2 at the beginning of the Third Period, and with the lead none of the Soviet players believed they could lose, but in the next ten minutes the underdog U.S. team pulled ahead 4-3 powered by goals from Mark Johnson who scored the tying goal, and team Captain Mike Eruzione, who scored what would be the winning goal with exactly ten minutes left to play, in those ten minutes the Soviets launched a powerful attack and did not stop, but they failed to score.  With the stadium afire with the shouts of USA! USA! American Goaltender Jim Craig turned away every shot. Al Michaels, who called the game for ABC later described the scene:

“The Soviets were putting so much pressure on the American team at the end of the game, and it was a one-goal game, the crowd is going absolutely insane, we were on a platform that was shaking, the production truck was going crazy.”

I could not believe what I was hearing and was screaming in the car. As soon as I got to Judy’s I went in and told her and her parents, who actually were not that interested in the game. When the game was televised that evening, I watched it with undivided attention and to this day I cannot forget that night.  The Americans had beaten the vaunted Soviet team 4-3 and would go on to defeat Finland in the Gold medal game 4-2.  The next day they were guests at the White House and after that the team broke up. Thirteen of the players would go on to NHL careers, and Brooks would lead the 2002 Team USA to a Silver in 2002 before being killed in a car crash in 2003.

When the game was over Tikhonov, in a rage blamed the main Soviet stars for the loss, including Tretiak for the loss. Tikhonov pointed to the failure of Tretiak, and of the big line of Petrov, Boris Mikhailov and Valery Kharlamov. One by one, Tikhonov jabbed a finger in the faces of those four players, saying: “This is your loss! This is your loss!” On the plane back to the Soviet Union Vasilyev grabbed Tikhonov by the throat and threatened to kill him, but he was pulled away by his teammates.

Later, Vasilyev recalled: “For me, it was a ‘Mirage on Ice,..I still can’t understand how we could have lost to the Americans. I still can’t believe in that – as if it were a dream…I believed then and I still believe that our dismissive attitude to the U.S. team had led to our defeat,” he said. “We simply hadn’t taken them seriously.”

Soviet Defenseman Slava Fetisov recalled: “Our team played a good game, but the U.S. team put together team speed, they never give up, and they got great support from their fans, I learned a pretty good lesson: Never underestimate your opponent.” Good advice  for anyone in a competitive sport, politics, or war. Alex Ovechkin of the Washington Capitols, Born five years after that game, and now one of the greatest players to ever play in the NHL noted in 2015:

“In Olympics, sometimes you can play great, but just the moment is not on your side, I don’t know what happened there. . . . Maybe they weren’t concentrating. Maybe it was bad luck.”

While the Soviet team remained dominant In international competitions until the break-up of the Soviet Union in 1990, the loss to the unheralded upstarts of Team USA in 1980 was the end of an era.  In the 1989-1990 season six of the 1980 Soviet team players, Helmuts Balderis, Viacheslav Fetisov, Alexei Kasatonov, Vladimir Krutov, Sergei Makarov, and Sergei Starikov were  allowed, to play in the NHL. Today, some 30 years after the fall of the Iron Curtain, many Russian players star in the NHL and remain in the United States even after their careers are over.

Forty years later the triumph of Team USA against all odds on that night is remembered as an event nearly unequaled in sports history as well as contemporary American history. It is considered one of the greatest games in hockey history. The game actually marked a return of pride to the country after a decade of discontent, defeat and discouragement.  That team and its members did something that no one expected in defeating the Soviets and going on to win the Gold medal against the Finns.  No one could have expected the effect on the country either. It was a miracle, a miracle on ice.

I don’t know about you, but I still believe in miracles, even in the age of Trump; and no, what Trump is doing is not miraculous, but rather a film flam show, mastering the media, and the most vile and base emotions of his supporters, while doing all he can to destroy the Constitutional and institutional guardrails against authoritarianism which have protected our country from tyranny for over two centuries. We need another miracle, but this time a hockey game won’t suffice.