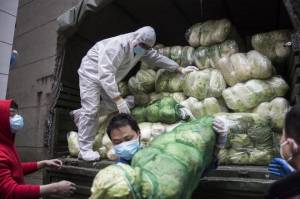 The disaster that few prepared for, including our President despite having verified and validated evidence of it in January is here. Back then we were given a moment in time to prepare, something that people that experience tsunamis ever get. An administration in denial dismissed evidence that could have mitigated the novel Coronavirus and minimized the number killed by it. I will not go through the litany of deception and false claims that he made made, and the actions of his administration in giving away tons of vitality needed Personal Protective Equipment  from our national stockpile, to China. PPE that our doctors, nurses, and other medical personnel are crying out for because they are having to reuse or use makeshift gear to treat the victims of the novel Coronavirus.

Back in January there were only a few cases, which the President said would soon disappear along with the virus, and the President’s “band played on,” to borrow words the late Randy Shilts in his monumental volume about the initial response of the Reagan Administration to the AIDS pandemic. However, despite the warning the President played politics by minimizing the threat, and later bragging about how he has responded to it, constantly upstaging, and contradicting the experts of the CDC including Drs. Fauci and Brix, while ignoring the rising infection rate and death toll until it became a political liability. When that happened he and is enablers, supporters, and propaganda network, you know them well Fox News began to deflect the blame to the Democrats, the impeachment hearings and Senate trial, the Chinese, the media, and anyone else for his multiple failures when simply listening to experts and being honest with the American people would have been far better. In fact he took his impeachment trial and COVID-19 so cavalierly that he kept having campaign rallies beating his chest, demonizing his opponents, bragging on himself, and exposing his followers to to a deadly virus in massed rallies who God knows how many were exposed to satiate his vanity. That is the mark of a true sociopath, he doesn’t even care about his supporters. Think about that.

Just 24 days ago, on 8 March, the United States reported 541 infections and 22 deaths. By March 18th there were 9,259 cases and 150 deaths. Four days later we were at 46,182 cases and 582 deaths, a death rate of 66%, well over the worldwide percentage. Two days later we were over 66,000 infections and over 1,000 deaths. Now we lead the world in number of infections, as infections and deaths are spiking, and the healthcare system is being overwhelmed without enough resources to care for the victims or protect their caregivers. In two and a half months we went from a barely noticeable situation, unless you pay attention to potential pandemics. But in 24 days we went from a noticeable wave to a tsunami of infection and death, not to mention economic carnage, and worldwide instability. But, instead of doing what almost all of his 44 predecessors did, President Trump declared “I don’t take responsibility for anything.” Forget President Harry Truman who declared “the Buck stops here,” or any other President, this President denies any blame for anything regardless of how serious it is. But that is his history: draft dodging, divorces, affairs, corporate bankruptcies and failures, leaving employees, contractors, and now the American people in the lurch to protect himself.

But that is not the case. Public health ranks at the bottom of our priorities. Expensive specialty procedures and interventions are at the top, not to include medical procedures performed simply for our vanity and good looks. Preparation for pandemics and disasters  is also low, because our medical system is profit based predicated on what insurance companies will pay for, if an American is fortunate enough to have medical insurance. The fact is that our private and even public hospitals operate with very little surge capacity, because it takes profits down. ICU beds, ventilators, and the highly trained staff need to man them are expensive. Insurance companies don’t like to pay those costs, nor do hospitals and medical systems. For the corporations, profit takes priority over people, even when the doctors, nurses, and other staff are committed to life and the Hippocratic Oath.

As of today that number is far lower than it was a week ago, as failing businesses end their COBRA policies, and then fire their workers. It looks great on a corporate balance sheet but it fucks all of their employees, especially those who devoted their lives and careers to those corporations, while the Trump Administration refuses to let the millions of people impacted by this to purchase health insurance through the Obamacare exchanges. The President rejected that today, it is quite obvious that he would rather destroy the lives of people than to save them and then claim victory despite the loss of 100,00-240,000 people or more. Those are not the actions of a man who stands for the sanctity of life, but rather a sociopath willing to sacrifice lives to keep power.

The cruelty of profit over life exposes that our real civil religion and morality is not life, but profit. As a historian and scholar of Nazi Germany and the Holocaust, I have to ask when palliative care transitions to euthanasia, and those deemed life unworthy of life, are euthanized by the people who supposedly there to care for them and protect the sanctity of their lives. As this cris continues, and the Trump Administration remains in change that such a decision will be made, not to protect the sanctity of life, but to enhance corporate profits, and political power, regardless of the human cost.

It is late and I am tired, but as of now of those whose cases were resolved by death and recoveries, 36% resulted in death. The worldwide death rate has gone up to 20%, up from 16% at the end of last week.

I believe in God, faith and prayer, but without the actions of responsible human beings in leadership positions, elected, appointed, or commissioned, we are headed to a human, economic, sociological, and eventually war based solution, regardless of whatever nation starts it,

So until tomorrow I wish you all the best. Please be careful out there.