Long Two Days, But Back with More Tomorrow 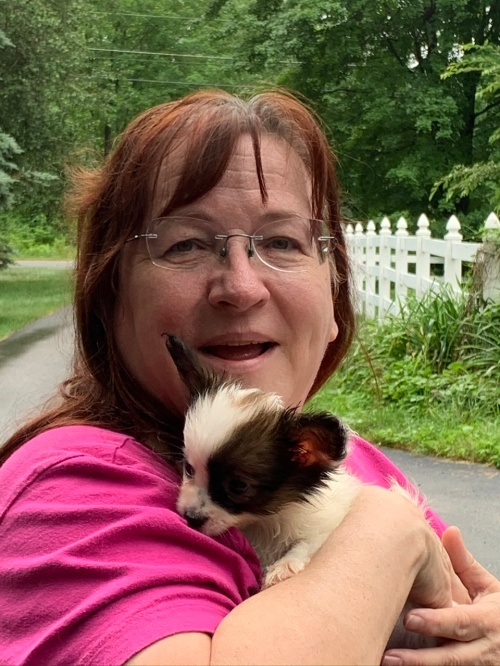 It has been a long couple of day in which about 12 hours of each were spent on the road. As you know from my posts last week, we lost Judy’s emotional support and therapy dog Minnie Scule from Kidney failure at the age of 8 1/2 last Monday. Judy was distraught, depressed, and crushed by the loss of Minnie, who since she was an 8-9 week old puppy was Judy’s constant shadow and companion. She was an extremely complicated, funny, at times demanding and obnoxious pup, but she was sweet, and the bond between Judy and Minnie was amazing. As such our next two Papillons, Izzy and Pierre pretty much bonded with me and formed their own security, observation, and wrestling team.

A very special friend of ours saw what was going on with Judy and bought her a little Papillon puppy from her breeder. I had to get special permission to take Judy to New Hampshire and back, but this morning we were rewarded with little Maddy Lyn. She immediately bonded with Judy and rode on Judy’s shoulder the whole trip home. She is so smart, sweet, and adorable it is amazing. She is definitely Mommy’s girl, and in some things she acts a lot like Minnie. In others not, but I wonder if Minnie travelled up with us in spirit to giver Maddy some pointers.

As you can see from these pictures there already is a bond between them. By the way, she was great on the trip and is making herself at home here. As for Izzy and Pierre, who have transitioned from being the younger dogs, this is their first time having a puppy. Maddy follows  them around and it is so funny.

I am grateful for the support I have from my command, their willingness to give me permission to travel out of the area, and for the kindness of so many people.