As I did last night I am taking a bit of a break by republishing parts of a series I did on the Battle of Leyte Gulf. I’m doing this because I am still too worm out to write anything new. Today I passed my retirement physical which means that I can retire unless something really happens. Then I went to work, caught up on email, conducted a couple of counseling sessions and later made some contact with some local universities and other organizations that might be interested in hiring me upon retirement. Once home I did some more work to get ready for the painters coming in tomorrow which will involve more work plus Zoom calls with a potential employer and my agent to figure out how to to do my book’s index in Microsoft Word. So anyway I will be getting up earlier to get the first Zoom interview before the contractors arrive.

By the way, any bets on The third and final debate?

So until tomorrow and my installment on the Battle of Surigao Strait, I wish you all the best.

Yesterday I reposted the introduction to this series dealing with the Japanese plan and the opening engagement where the U.S. Navy submarines USS Darter and USS Dace sank the Japanese Heavy Cruisers Atago and Maya, and heavily damaged their sister ship Takao.

Takao was escorted to Brunei by two destroyers, and later to Singapore where she was deemed unrepairable unless towed to Japan, an action considered too risky. So she was used as a floating anti-aircraft battery and was sunk as a target by the HMS Newfoundland.

But the loss of Atago was more problematic for she was Vice Admiral Takeo Kurita’s Flagship and sank so fast that Kurita had to swim for his life and lost many key staff members which would impact his conduct of the coming battles. Kurita was rescued by a destroyer and transferred his flag to the battleship Yamato. However Kurita had lost 5 vital ships that he would need to succeed in his mission. Between them the three cruisers mounted twenty-eight 8” Guns and  forty-eight 24” torpedo tubes which fired the deadly Type 93 Long Lance torpedoes, the most advanced torpedoes produced during the war. He also lost the support of two large, fast, and powerful destroyers.

Following the loss of the three cruisers, the largest and most powerful in the Imperial Navy,  Kurita’s Center Force had an uneventful rest of the day on the 23rd as his ships kept a watchful eye and ear for more US Navy submarines. At about 0800 on 24 October the Center Force was spotted by 3 U.S. Army Air Force B-24 Liberator bombers which promptly reported them.

One of the ships in the Center Force was the battleship Musashi, sister ship of the mighty Yamato which was also in the force. The two battlewagons were the largest battleships ever built. With a full load displacement of 72,800 tons and an armament of nine 18.1 inch guns, the largest battery ever mounted on a warship the two behemoths also had massive anti-aircraft batteries and the Japanese were counting on them leading the Center Force to a miraculous victory during the battle. Admiral Kurita addressed his commanders prior to the battle:

“I know that many of you are strongly opposed to this assignment. But the war situation is far more critical than any of you can possibly know. Would it not be shameful to have the fleet remain intact while our nation perishes? I believe that the Imperial General Headquarters is giving us a glorious opportunity. Because I realize how very serious the war situation actually is, I am willing to accept even this ultimate assignment to storm into Leyte Gulf. You must all remember that there are such things as miracles.” 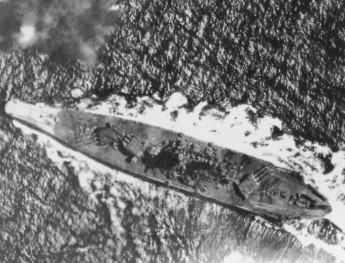 At 1000 the Musashi’s radar picked up approaching aircraft. These were from the USS Intrepid and the USS Cabot which were assigned to Rear Admiral Gerard Bogan’s Task Group 38.4. The anti-aircraft crews and damage control teams prepared as the ship’s bugle sounded the alarm. As the aircraft came closer the main guns of the Musashi fired but ceased fire as the aircraft drew closer.

SB2C-3 Helldiver dive bombers, carrying 500 and 1000 pound armor piercing bombs plunged downward at the ships of the Center Force.  F6F Hellcat fighters unopposed by enemy fighters conducted strafing runs as TBF Avenger torpedo bombers dropped their deadly Mark-13 torpedoes, loaded with 600 pounds of RDX or Torpex explosive, 50% more powerful than TNT whose design and use were  perfected by wartime experience.   at the Musashi. The big ship avoided two of the “fish” but a third struck causing little damage and the first wave few away. Musashi reported that she had sustained a hit and continued on. The Japanese sailors knew that this would not be the last attack. Though Musashi had weathered the first strike the American fliers hit the battleships Nagato, Yamato and severely damaged the heavy cruiser Myōkō.

At 1140 the Musashi’s radar picked up the next wave of attackers and at 1203. These were from the Intrepid, Essex and Lexington. Hitting the Center Force in two waves a half hour apart these aircraft delivered punishing blows on Musashi. She was hit by 3 torpedoes and 2 bombs. The torpedoes caused damage that caused a 5 degree list and was down six feet by the bow. The torpedo damage was concentrated midships and one torpedo flooded her number 4 engine room. One of the bombs hit an engine room and disabled her port inline propeller shaft. With her speed reduced she proceeded on. 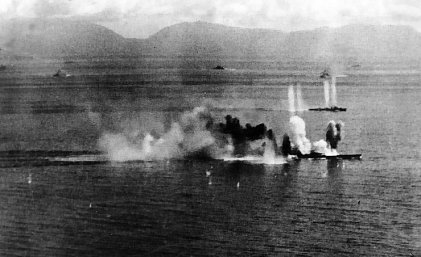 Thirty minutes following this attack at about 1330 Musashi was attacked again by Helldivers and Avengers. She is hit by 4 1000 pound bombs and 4 torpedoes. She was now so badly damage that she could no longer keep up with the fleet and dropped behind to fend for herself. At 1350 this attack ended and her speed reduced to 20 knots while she was now down 13 feet by the bow, with nearly all of her trim and void tanks full. With such damage the was now little room for any more damage in her forward compartments, but the hits would keep coming even as she dropped behind the rest of the fleet.

Separated from the fleet, the wounded giant was now attacked by aircraft from the Enterprise, Cabot, Franklin and Intrepid that score hits with 11 bombs including the deadly 1000 pounders and 8 torpedoes. During the course of these attacks which ended shortly after 1530, the Musashi sustained 19 torpedo and 17 bomb hits and taken 18 near hits close aboard. The damage was fatal

At 1620 her skipper Rear Admiral Toshihira Inoguchi began desperate damage control measures to control the increasing list which had reached 10 degrees to port. Now dead in the water Musashi continued to list further and when the list reached 12 degrees at 1915 Inoguchi ordered preparations to abandon ship. The surviving crew assembled on the deck, the battle flag and the Emperor’s portrait were removed. Admiral Inoguchi gave his personal notebook to his Executive officer Captain Kenkichi Kato and directed then him to abandon ship. Admiral Inoguchi retired to his cabin and was not seen again. At 1930 with the list now 30 degrees Captain Kato gave the order to abandon ship and soon with the list increasing further men began to slide across the decks being crushed in the process. Panic broke out among the crew which had been assembled by divisions and Captain Kato ordered “every man for himself.” At 1936 the ship capsized and port and went down by the bow sinking in 4,430 feet of water in the Visayan Sea at 13-07N, 122-32E.

The destroyers Kiyoshimo, Isokaze and Hamakaze rescued 1,376 survivors including Captain Kato, but 1,023 of Musashi’s 2,399 man crew were lost including her skipper, Rear Admiral Inoguchi who was promoted Vice Admiral, posthumously.

The rest of the Center Force under Kurita turned around to get out of range of the aircraft, passing the crippled Musashi as his force retreated. Kurita’s retreat was temporary and Kurita waited until 17:15 before turning around again to head for the San Bernardino Strait hoping to find it empty of American ships. His force was still battle worthy because the majority of the 259 sorties were directed on Musashi and the Heavy Cruiser Myōkō which retired heavily damaged. The Southern Force which had also been hit by American carrier air strikes also continued its push toward Surigao Strait.

Kurita’s Center Force was now without one of the two most powerful battleships in the world, four heavy cruisers, and two destroyers going in to the fight of their lives.

The Battle of Surigao Strait, the revenge of the Pearl Harbor Battleships will be the next article in this series.