The Valiant Sacrifice of the Torpedo Bombers: VT3, VT-6 and VT-8 at Midway

Alfred, Lord Tennyson: The Charge of the Light Brigade

They were not six hundred and they were not mounted on horses but the Naval Aviators of Torpedo Squadrons 3, 6 and 8 and their aerial steeds 42 Douglas TBD Devastators and 6 TBF Avengers wrote a chapter of courage and sacrifice seldom equaled in the history of Naval Aviation. Commanded by veteran Naval Aviators, LCDR Lance “Lem” Massey, LCDR Eugene Lindsey and LCDR John Waldron the squadrons embarked aboard the carriers flew the obsolete TBD Devastators and the young pilots of the Midway based Torpedo 8 detachment under the command of LT Langdon Fieberling flew in the new TBF Avengers.

The TBD which first flew in 1935 entered service in 1937 and was possibly the most modern naval aircraft in the world when it entered service.  It was a revolutionary aircraft. It was the first monoplane widely used on carriers and was first all-metal naval aircraft.  It was the first naval aircraft with a totally enclosed cockpit, the first with hydraulic powered folding wings.  The TBD had crew of three and had a maximum speed of 206 miles an hour and carried a torpedo or up to 1500 pounds of bombs (3 x 500) or a 1000 pound bomb.

129 TBDs were built and served in all pre-war torpedo bombing squadrons based aboard the Lexington, Saratoga, Ranger, Yorktown, Enterprise and Hornet with a limited number embarked aboard Wasp.  The Devastator saw extensive service prior to the war which pushed many airframes to the end of their useful service life and by 1940 only about 100 were operational by the beginning of the war, and now were for all purposes obsolete antiques.

They were still in service in 1942 as their replacement the TBF Avenger was not available for service in large enough numbers to replace them before Midway.  The TBDs performed adequately against minor opposition at Coral Sea and in strikes against the Marshalls but the squadrons embarked on Yorktown (VT3), Enterprise (VT-6) and Hornet (VT-8) were annihilated at Midway with only 6 of 41 aircraft surviving their uncoordinated attacks against the Japanese Carrier Strike Force.  They were too slow, had poor maneuverability, insufficient armor and defensive armament. 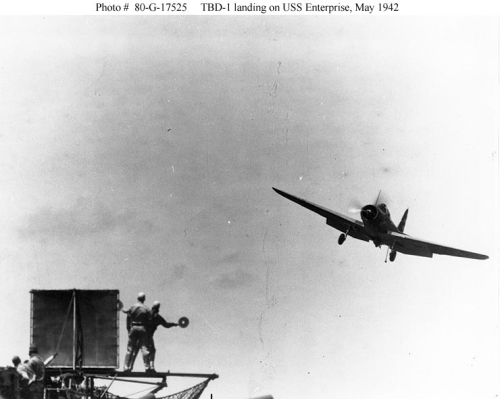 The Torpedo squadrons attacked independently of each other between 0920 and 1030 on June 4th 1942.  Lacking coordination and with inadequate escort, the lumbering aircraft were easy prey for the modern Japanese A6M Zeroes.

The Japanese Combat Air Patrol ripped into the slow, cumbersome and under armed TBD Devastators as they came in low to launch their torpedoes.  Torpedo Eight from Hornet under the command of LCDR John C Waldron pressed the attack hard but all 15 of the Devastators were shot down.  Only Ensign George Gay’s aircraft was able to launch its torpedo before being shot down and Gay would be the sole survivor of the squadron to be picked up later by a PBY Catalina patrol plane.

Torpedo Six from the Enterprise under the command of LCDR Eugene Lindsey suffered heavy casualties losing 10 of 14 aircraft with Lindsey being one of the casualties.  The last group of Devastators to attack was Torpedo Three from the Yorktown under the command of LCDR Lem Massey losing 11 of 13 aircraft with Massey a casualty last being seen standing on the wing of his burning aircraft as it went down. 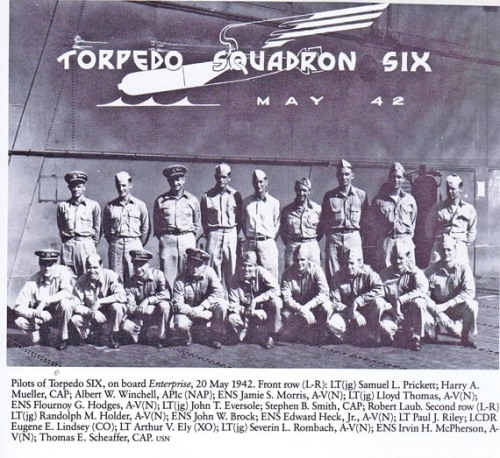 These aircraft were also decimated and Massey killed but they had drawn the Japanese Combat Air Patrol down to the deck leaving the task force exposed to the Dive Bombers of the Enterprise and Yorktown.  The six aircraft of the Torpedo Eight detachment from Midway under the command of LT Fieberling lost 5 of their 6 aircraft while pressing their attacks.  Only Ensign Bert Earnest and his aircraft survived the battle landing in a badly damaged state on Midway.  Four U.S. Army B-26 Marauder Medium Bombers were pressed into service as torpedo bombers of which 2 were lost.  No torpedo bomber scored a hit on the Japanese Task force even those torpedoes launched at close range failed to score and it is believe that this was in large part due to the poor performance of the Mark 13 aircraft torpedoes. 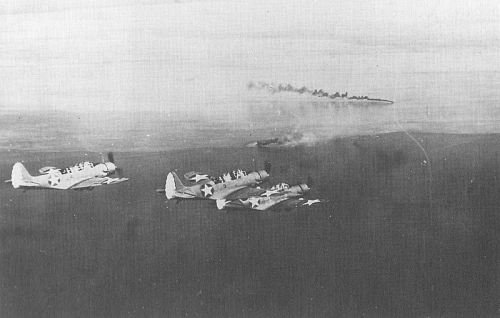 Despite the enormous losses of the torpedo squadrons their sacrifice was not in vain. Their attacks served to confuse the Japanese command and delay the rearmament of aircraft following the Japanese strikes on Midway. They also took the Japanese Combat Air Patrol down to sea level and opened the way for American Dive Bombers to strike the Japanese with impunity fatally damaging the Akagi, Kaga and Soryu in the space of 5 minutes.

After Midway the remaining TBDs were withdrawn from active service and no example survives today. The TBF became the most effective torpedo bomber of the war. 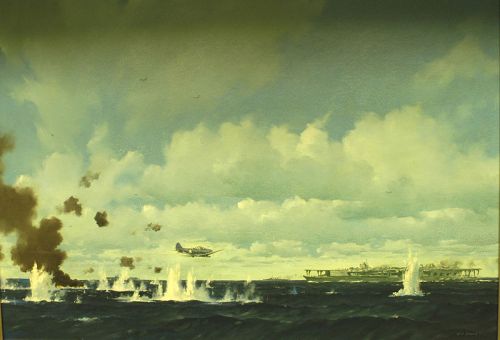 Filed under History, world war two in the pacific

13 responses to “The Valiant Sacrifice of the Torpedo Bombers: VT3, VT-6 and VT-8 at Midway”