A New Start…Life off the Fat Boy Program

“Every day is a new opportunity. You can build on yesterday’s success or put its failures behind and start over again. That’s the way life is, with a new game every day, and that’s the way baseball is.” Bob Feller

One of the biggest effects of my post-Iraq PTSD crash was how I tried to cope with this multi-faceted beast. Of course psychologically and spiritually I was in the toilet so much so that I was in the midst of a spiritual crisis so great that I was for all practical purposes an agnostic.  I struggled to hold myself together during 2008 and early 2009 trying to believe again and keep in shape. To compensate for my lack of belief, depression and the other nasty effects of PTSD such as night terrors, insomnia, hyper-vigilance, flashbacks I threw myself totally into work on the critical care units of the hospital I was serving. I finished my Masters Degree program and worked hard to better our hospital’s Clinical Pastoral Education Program and served on various committees including the Ethics Committee.  It was too much and the collapse deepened so I sought other coping mechanisms. I turned to comfort food and drink as a way to cope, especially food that was bad for me and way too much very good beer.

After my physical fitness test and weigh in during April of 2009 I lost all control of the latter two. While I had been drinking more since my return from Iraq than before the deployment in the spring of 2009 it became a problem.  I would leave work and on days when the Norfolk Tides were in town I would take to my season ticket seat in Section 102 Row B Seat 2 and seek refuge from my problems.  The ballpark and baseball helped bring some peace to my soul, but it would only last for 3 hours.  At the ballpark I would drink two to three beers with a chili dog and fries and maybe a pretzel, peanuts or ice cream.  After the game I would swing by the Krispy Crème Donut shop on the way home and pick up a dozen hot and fresh glazed donuts. I would then get on my computer and write on this site. While writing I would down three to six of the donuts with another two to four beers and repeat the cycle the next day for the rest of the home stand. On other nights I would go over to get donuts and drink more beer with them often after eating a heavy meal with very good beer at the Gordon Biersch Brewery Restaurant in Town Center.  By November I weighed 194 pounds and though I passed the PT test with a very good score for someone my age I was way over my weight and body fat limits. Thereafter it was a struggle to get below 180 pounds. I failed my next body composition assessment by a percentage point and though scoring well enough to qualify for the DOD waiver which would have taken me off of the program it was not approved.  I weighed in weekly and continued to improve my physical condition to the point that I was within the body fat standard by the time I left that duty assignment I transferred before the next official physical fitness assessment and got to my new assignment after the period was over.  Thus I remained on the program.

To those that have never experienced life in any military branch Fat Boy or Girl program it is humiliating, at least if you are a military professional.  There is a stigma to being fat because the military is run by tall skinny people.  Those of us of the under tall variety understand this stigma very well even when we are within standards.  I know a good number of good Soldiers, Sailors and Marines put out of the military because they did not meet their service body fat and weight standards.  Many like me are those suffering the effects of war and just trying to cope with life.  Others are men and women who are suffering the effects of time with shrinking bodies due to spinal disc compression and other injuries, illnesses and the slowing of metabolism which conspire against them. The military is a young person’s game and 51 year old 30 year veteran relics like me are in the minority.  For me the physical requirements are little different than when I first went on active duty in 1983. Back then I thought that when you got older you would catch a few breaks. Well in the age of budget cutting and a shrinking military force those standards continue to tighten and few breaks are to be found. 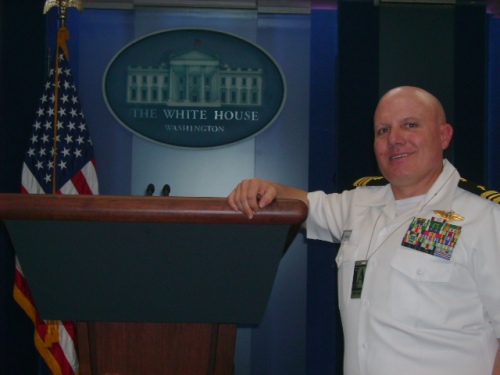 Bursting at the seams in my Summer Whites in 2009, this was not a comfortable uniform at the time, now it is very loose

While I had lost weight and body fat I was still over my weight limit.  The body fat measurement in the Navy is the measuring tape around the neck and the fattest part of the belly.  It is a terribly subjective and according to many scientific studies inaccurate test.  Nonetheless if you are over the weight limit you must be taped.  I didn’t want to go through that again so I decided that I was going to start really eating healthy and diversifying my exercise regimen.  When I arrived at my new assignment I weighed 184 pounds and during the winter added a few more pounds. At the beginning of January I bought a digital scale and began to weigh myself several times a week. I stopped the comfort foods except for an occasional hamburger or piece of pizza.  Even if I ate a hamburger I omitted the fries and held the cheese and mayo. I began to look at the nutritional information on everything that I ate even looking up restaurant data to ensure that I had the healthiest food that I also liked, it does no good to eat healthy if you hate what you are eating because you don’t stick with it.  I cut back on my drinking a lot, even going to Yuengling Light Beer at home.  I counted every calorie and measured calories burned. If I went over on one thing I compensated rather than continuing as if I had not.

As winter became spring I noticed a difference, I was weighing less and all of my clothes continued to get loose to the point that things that I could not get into during the fall were baggy and some nearly falling off.  As the date approached my scales had me near the limit for a half inch below my real height just in case I got a bad measurement on my height, five pounds is five pounds.  I felt a lot of stress over the week and could feel every muscle in my back completely tense to the point that I was in pain. I weighed in Friday at 169 pounds and was six pounds below my weight limit and one pound below the lower height limit.  I have lost all 25 pounds that I gained during that horrible period of my life. On Monday I will take the physical fitness test something that I never have a problem doing well on.  When I do that I will be officially off the program.

Last night I was invited to do the invocation at the Navy Nurse Corps Birthday Ball at Camp LeJeune. I eased into my Mess Dress Blue uniform which last May I could barely squeeze my body into and in which I looked terrible.  The uniform was loose and fit very well. I went to the ball and had a wonderful time with my colleagues from the Naval Hospital and their guests.  I made sure that I had a friend take the picture which accompanies this post.

For me this is a comeback. I still have my struggles with PTSD but on the whole on the physical, psychological and spiritual aspects of life I am doing much better. Yes I still struggle at times and experience some of the manifestations of PTSD and of my spiritual crisis but I am not collapsing when something shakes me like I was between 2008 and even into 2010.

Had I failed the body composition assessment I could have been separated from the Navy and while I probably would have been able to retire it would have been a most humiliating way to leave the service.  Instead as long as I am alive and haven’t done anything incredibly stupid I will be promoted to Commander on September 1st and continue to be able to serve God’s people in the Navy for years to come. Of course I cannot fail a physical fitness assessment for the next two years but now that I have my diet stabilized and composed of things that I like and live in a place at the Island Hermitage where I love to run, walk and bike I do not expect to ever fail that again. My goal is to get back to the weight that I was when I was commissioned as an Army Officer in 1983, 158 pounds and keep it there. Thus my task is still incomplete.  I have succeeded in my first goal and now it is time to complete the deal and live healthy from here on out.

Today is a new opportunity and I am putting past failures behind.