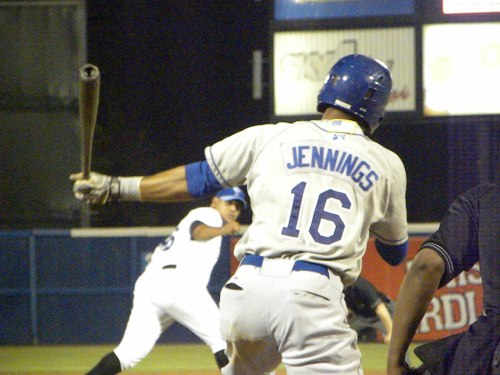 It was a warm and uncomfortably humid night at the Church of Baseball, Harbor Park Parish.  It was so humid that it seemed that the very air was trying to mug the 5000 of so fans that braved to weather to come to the game.  After a 28 minute delay the game got underway with Tim Bascom facing former Tide Bobby Livingston. 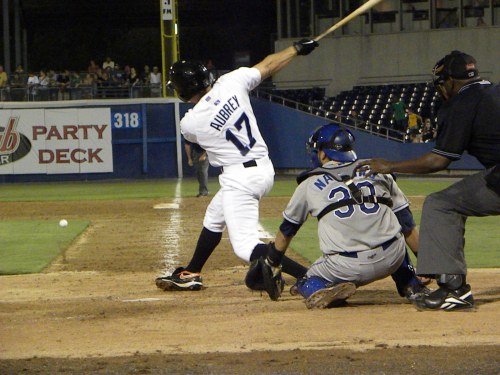 Both Bascom and Livingston held the opposing team scoreless for the first three innings but that did not last as they entered the 4th inning when the game became a see-saw match as each team kept pace with the other.  In that inning Bascom gave up a single to Leslie Anderson which was followed by Angels Chavez’s 9th home run of the year to give the Bulls a 2-0 lead. The Tides got 2 in the bottom of the 4th when Nolan Reimold singled and scored on Lou Montanez’s triple. Montanez then scored on a sacrifice fly by Michael Aubrey.  In the 5th inning Bascom walked J. J. Furmaniak and with two outs gave up a home run to Rocco Baldelli.  The Tides then scored 4 in the 5th inning as with 1 out Scott Moore and Robert Andino singled to put runners on first and second.  Nolan Reimold flied out for the second out but was followed by Montanez who doubled to bring Moore home.  With Michael Aubrey at the plate Livingston threw a wild pitch allowing Andino to score once again tying the game.  Aubrey doubled his 25th of the year to score Montanez and would score himself when Bull’s right fielder made a play right out of Bull Durham and simply missed an easy routine fly ball off the bat of Brandon Snyder for the 4th run of the inning.

In the 6th inning the game went glunk for the Tides.  Pat Egan relieved Tim Bascom and gave up a single to the persnickety Angel Chavez who has been a pain to Tides pitchers this series.  However Egan got Omar Luna to ground into a double play and it looked like the Tides would get out of the inning with no damage and the lead.  That did not happen, the next batter Fernando Perez hit a sharp ground ball which was deflected off the glove of Paco Figueroa for an infield hit. Desmond Jennings then hit a routine chopper to Robert Andino who bobbled the ball to put runners on first and second. The very next batter, J.J. Furmaniak hit a similar ball to Andino who this time missed the ball completely appearing not even have his mind in the game took his time to track it down behind 2nd base to allow Perez to score.  This opened the door for the Bulls whose next batter Dioner Navarro singled to left to score Jennings and was followed by Chris Richard who doubled to score Furmaniak and Navarro to give the Bulls an 8-6 lead.

The Tides came back in the bottom of the 6th inning against Bulls reliever Brian Shouse. Jeff Salazar doubled to lead off the inning and was followed by Paco Figueroa who walked. Scott Moore stuck out swinging and was followed by Robert Andino who singled to load the bases.  Shouse then walked Nolan Reimold to score Salazar and narrow the Bulls lead to one run.  Lou Montanez drove in Figueroa on a force out. Shouse walked Michael Aubrey to load the bases. Then controversy happened. Brandon Snyder appeared to draw a walk on a checked swing on a 3-2 count but Bulls catcher Dioner Navarro appealed the call to the 1st Base umpire Stephen Barga who called Snyder out. Snyder ran down to argue the call and was tossed from the game and Bobby Dickerson continued the discussion for several minutes before giving up. Thus at the end of the 6th the score was tied 8-8.

There were no runs scored in the 7th or 8th innings, Frank Mata set the Bulls down in order in the top of the 7th while Shouse retired the Tides giving up a walk to Paco Figueroa.  Mata had trouble in the 8th after getting two outs on a double play loading the bases to bring in Alberto Castillo who struck out Chris Richard swinging.  Joe Bateman replaced Shouse in the 8th allowing a leadoff walk to Andino but retiring Reimold, Montanez and Aubrey in order. Castillo came back out in the 9th to face Rocco Baldelli who doubled and advanced to second on a ground out by Leslie Anderson. He then scored on a sacrifice fly by Angel Chavez before Castillo stuck Omar Luna out swinging to end the inning.  The Tides went down in order facing Jake McGee in the bottom of the 9th and the delayed and slow moving game came to an end with the Tides losing 9-8.

Joe Bateman (6-0 1.81 ERA) got the win for the Bulls and Jake McGee the save, his first and Alberto Castillo got the loss (1-1 4.33 ERA) got the loss. In the end the game came down to Robert Andino’s costly errors which helped the Bulls to 4 unearned runs in the 6th inning.  Andino now has a league leading 28 errors many of which have cost the Tides pitchers runs and the team games. Egan should have left with the lead and Castillo should have been pitching for a save with a decent lead.  Despite his clutch hitting Andino will need to get his head in the defensive game if he hopes to play shortstop in the Major Leagues.  When he is locked on defensively he is excellent but as of now his poor defense is a liability that sometimes cancels out all his excellent work at the plate.  When I first entered the Army a Special Forces Sergeant told me and those with me that there were two things in the Army, “attaboys” and “aw shits” and that it took 2000 attaboys to make up for one aw shit.  Andino now has 28 aw shits this year in the field. I wish him well but his defense needs to improve dramatically to be the kind of asset to a Major League franchise that his obvious talent at the plate would make him.

The teams played today with the Bulls winning again. The article on that game will be separate from this and will likely appear tomorrow.  The Tides travel to Durham for the first two games of a road trip that will take them to Charlotte and Gwinnett before returning home on the 31st for their final home stand of 2010 against the Braves. Troy Patton (7-10, 4.85ERA) will take the hill for Norfolk against Durham right-hander Richard de los Santos (13-5, 3.59 ERA).