Reflections on Ministry as Navy Chaplain: The Guiding Principles of the Chaplain Corps 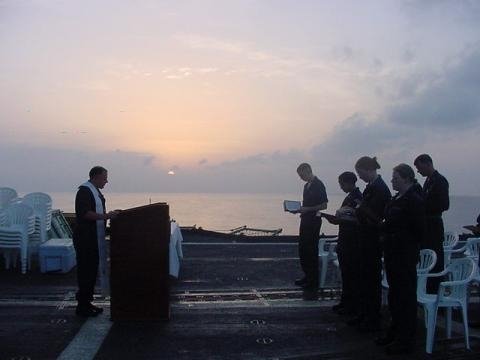 I have served as a chaplain in the Army and then the Navy since 1992. In fact I was appointed as a Chaplain in the Texas Army National Guard around late September of 1992 following my seminary graduation and after 11 years of service in the Army.

I grew up in a Navy family and I am grateful for that. We lived in many places and my parents ensured that church was a part of our life growing up. They had grown up as Methodists but because of our military lifestyle which involved frequent moves our church experience was much broader that people who grew up in the same town or the same faith tradition. I attended Sunday School, Vacation Bible School and church in a variety of churches. Methodist, Lutheran, Baptist, as well as Navy Chapels. I felt called to the Navy Chaplain ministry as early as my senior year in high school while on a Navy Junior ROTC cruise on the USS Frederick, LST-1184. That was deferred for about 20 years and twenty-three years after feeling that call I celebrated my first Eucharist underway on Easter Sunday 2001 aboard the Frederick, the very ship that I felt that call in 1978.

In my own pre-ministry life in college and the Army I was part of Conservative Baptist, United Presbyterian, PCA Presbyterian, charismatic churches and Army Chapels. I attended seminary in schools that were not of my denomination.

I was ordained in a non-denominational Evangelical Christian Church and my theological journey in a Southern Baptist Seminary led me in a Anglican and Catholic direction. That led in 1996 to my ordination first as a Deacon then Priest in the Charismatic Episcopal Church. Eventually after a faith crisis following my time in Iraq which I came home from with a severe case of PTSD I was for all practical purposes an Agnostic struggling to believe in God. It was a most difficult time but eventually faith returned. However that faith was more progressive on social and political issues and more inclusive of others and within months I told by my bishop that I was “too liberal” and needed to leave the church.  That was just over two years ago. It came just a couple of months after I had lost my father to Alzheimer’s Disease and was just about to transfer to a new duty station. I was fortunate to find a home with a church of the Old Catholic tradition, the Apostolic Catholic Orthodox Church. (http://apostoliccatholicorthodox.org ) That was a blessing because though a small denomination it held to the beliefs that helped make me a Priest and Chaplain.

Navy and Army Chaplains had significant influence in my life and most came from Christian denominations other than whatever I was in at various points in my life. As first an Army Chaplain in 1992 and now since 1999 a Navy Chaplain I have tried to embody that care and love that was shown to me, both to military personnel, their families, retirees and veterans as well as my fellow Chaplains.  Many of these men and women regardless of their denomination or theological views are often isolated from their own denominations and have to deal with all of the stresses of military life while taking on the burdens of those that they serve.

We are religious leaders and naval officers.

We are faithful to our calling as chaplains and strive to grow in our faith.

We have taken an oath to support and defend the Constitution of the United States, and will faithfully discharge our duties.

We respect the dignity of those we serve.

We seek to understand cultural and religious values that differ from our own.

We believe the right to exercise our faith is best protected when we protect the rights of all to worship or not worship as they choose.

We work together to meet religious needs.

We are called to serve our people, the Naval Service and each other.

We hold sacred the trust placed in us.

We Are Navy Chaplains

With that said I will sign off for the night.