Terrorists Don’t Get to Be Heroes

“How to defeat terrorism? Don’t be terrorized. Don’t let fear rule your life. Even if you are scared.”  Salmon Rushdie

The events in Boston this week have shown us once again that we in the United States are not able to completely be safe from the acts of terrorists. While we do not know the motivations or affiliation of the Tsarnaev brothers, nor if they are connected to others in this country or abroad who would attempt similar acts of terrorism.

The attack by the brothers Tsarnaev was unsettling but it did not fill the city of Boston with fear. Instead, that city, its citizens, its law enforcement agencies as well as Federal and State law enforcement showed a resolve that I do not think that either the Tsarnaev brothers or other terrorists, foreign or domestic expected. Even as the citizens of the city grieved a systematic investigation that relied on the help of citizens identified the brothers and flushed them out of hiding. When the battle with the terrorists began in the streets of Watertown the city went on lockdown until one was killed and the other captured. The operation to identify and capture the two brothers was like nothing seen in this country.

Americans, especially those in the “liberal” Blue states like Massachusetts are supposed to be soft and cowardly. However the people of Boston showed how wrong they are in their assessment. 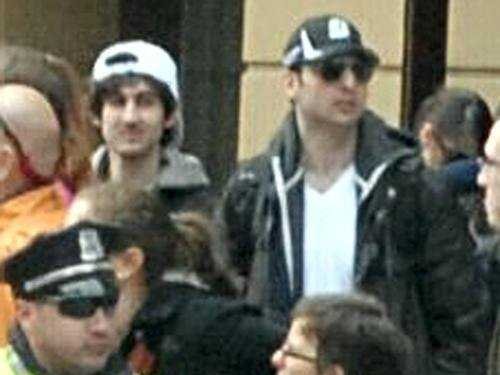 Terrorists tend to be rather dismissive of how Americans will react when attacked. They are a rather arrogant type of people. They are “True believers”  who believe that they alone and those that agree with them completely are right, that they alone have heaven’s blessing and that others be damned. Salmon Rushdie, the Iranian novelist who has lived under the threat of death for decades said of them: “The fundamentalist believes that we believe in nothing. In his world-view, he has his absolute certainties, while we are sunk in sybaritic indulgences. To prove him wrong, we must first know that he is wrong.”

It was fascinating for me to read that Tamerlan Tsarnaev was thrown out of the Boston Islamic center recently for going into a tirade against the Imam for using Dr Martin Luther King Jr as an example to emulate. Tamerlan shouted “You cannot mention this guy because he’s not a Muslim!” to the shock and dismay of those in attendance. When I read this I immediately thought of something written by Eric Hoffer:

Somehow I do not think that this will be the last terror attack that we see from some true believer, be they Islamic and connected with one of the myriad of Islamic terrorist groups, or domestic American ant-government or anarchist types from the right or the left. Their world views may seem disparate, religious, political, economic or social from points all around the spectrum of belief but they are surprisingly alike. They believe that they are the holders of truth and righteousness. Those that do not agree with them or who they believe have offended them, their “god” be that “god” a deity, a book of scriptures or their political, economic or social beliefs are the enemy and worthy of desruction. However, I think that Charles Dickens writing in David Copperfield said was right when he said “what such people miscall their religion, is a vent for their bad humours and arrogance.” 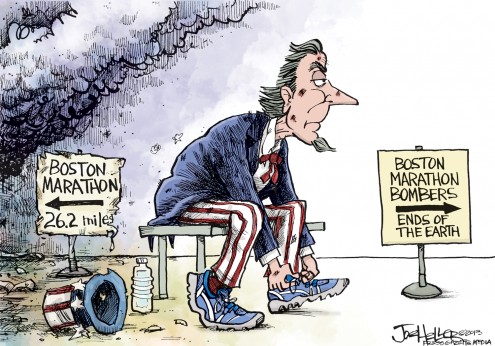 This week we saw two young men who had lived in our country for over a decade decide to, for yet unknown reasons decide to attack, kill and maim fellow citizens as well as visitors to this country. I’m sure that they thought that they were doing something heroic. However, the real heroes were the people of Boston who responded to the attack providing help and hospitality to those injured or displaced and the men and women of law enforcement who helped hunt the Tsaraev brothers down. Salmon Rushdie was right the way to fight terrorism is not to be terrorized and not to live in fear. It is time that we learned that lesson like so many Bostonians did this week.

As far as the terrorists themselves, to quote Major Kira Nerys from Star Trek Deep Space Nine “Terrorists don’t get to be heroes.”

Joy and Sorrow in Boston: The Boston Marathon Bombers are Killed or Captured

“joy and sorrow are inseparable. . . together they come and when one sits alone with you . . remember that the other is asleep upon your bed.” Kahlil Gibran

I was listening to the radio tonight on my way home from dinner when news broke that Boston Police, the Massachusetts State Police and the FBI had cornered and eventually captured the second suspect in the Boston Marathon Bombing. The capture came after a city wide lock down in which the FBI, the Mayor and Governors shut down public transportation systems and asked people to “shelter in place” or remain in their homes.

That order came after the suspects had killed a MIT Police Officer and commandeered a SUV after the FBI had released photos of them and asked for assistance in identifying and finding them. Within minutes the phone lines and websites were flooded with tips and reports. They were found and the older brother Tamerlan Tsarnaev was killed in a gunfight with police. The younger brother Dzhokhar escaped though wounded and found refuge in a boat parked in a driveway on Franklin Street in Watertown.  At about 5PM the owner of the boat, leaving his house when given the all clear saw blood leading to the boat and discovered the wounded suspect in the boat and immediately called police.

After it was confirmed by NBC’s Pete Williams and other news services people poured onto the streets of Watertown and Boston. People were cheering and waving American flags some chanting USA, USA USA! There was a collective sigh of relief and shout of victory when law enforcement officials captured Dzhokhar Tsarnaev.

It was amazing thing to see it, in fact I went back to my local watering hole to celebrate with whoever still might be around. It was a cathartic moment. I think the last time I saw this kind of reaction was when Osama Bin Laden was killed by SEAL Team Six.

However despite the joy it I saw the following tweet on Twitter from the Boston Police Department.

It was a moment that struck me. For when I saw that tweet it became apparent to me that what I was witnessing was real joy, but it was joy because the two brothers had inflicted great pain and suffering on hundreds of people. They killed four, wounded nearly 180 more and terrorizing a city. My thought, which I posted on my Facebook page was “Remember…the reason we are cheering now is because so many wept…” I saw the paradox inherent in this expression of joy. It was a kind of deliverance from evil, people rejoiced for good reason but their rejoicing was the product of the suffering of the people that they knew who had been affected by the evil perpetrated by Dzhokhar and Tamerlan Tsarnaev. 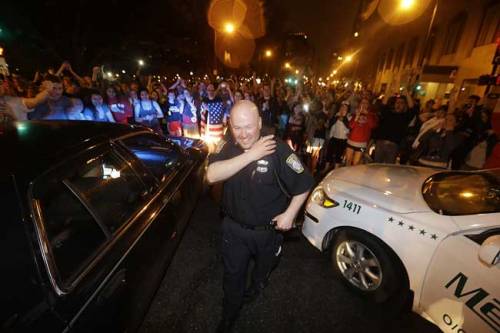 I felt the same joy because though I did not know any of the men, women or children killed by them the victims were my fellow citizens and others who were guests in my country. I don’t know about you but when someone be they a citizen or non-citizen attacks my country and kills and injures my fellow citizens and those that are our guests it angers me. I felt that anger in 1995 when Timothy McVeigh destroyed the Murrah Federal Building in Oklahoma City and in 2001 when Al Qaeda attacked the World Trade Center and the Pentagon. I felt in on Monday when I heard about the Boston Marathon Bombing while waiting for my flight home at Chicago’s O’Hare Airport. For the days between that afternoon and this evening I felt the collective anxiety of so many others as we all wondered who had conducted this attack and what might happen next.

True joy is almost always the sister of unwanted pain and sorrow. This week so many Americans experienced both sorrow and joy. It was a surreal week. Now the story isn’t over. Dzhokhar is badly wounded and has to recover from those wounds before he stands trial in a Federal Court and before we find out more of the reasons for this attack and the relationship, if any of Tamerlan and Dzhokhar Tsarnaev to Chechnyan or Islamic  terrorist groups.

That being said, today is a day to celebrate even as we recognize how so many others suffer. It is a paradox.

Filed under News and current events