Run Away By the Bay: 49ers Thrash Packers 45-31 in NFC Division Matchup 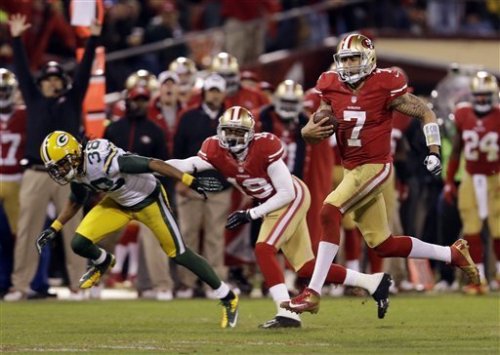 The San Francisco 49ers ran all over the Green Bay Packers in the first NFC Divisional Playoff Game on Saturday night. Second year Quarterback Colin Kaepernick led the 49ers to a 45-31 win over the Packers, going through the Packer defense like a knife through hot Brie. The 49ers offense pounded the Packers defense gaining 579 yards against a defense that had only allowed 324 against the Vikings a week ago and forced 3 turnovers.

The 49ers led at the half by a core of 24-21 and never looked back dominating the second half. Although the Packers and Quarterback Aaron Rodgers had decent offensive numbers they never really got completely in sync while the Packers defense was no match for Kaepernick and the 49ers machine. The 49ers also capitalized on Packers turnovers including a fumble on a punt near the Green Bay goal line.

The win demonstrated why 49ers Head Coach Jim Harbaugh stayed with Kaepernick even after starter Alex Smith recovered from an injury sustained in week nine. Kaepernick’s passing was deadly and his running ability was impossible for the Packers to counter.

San Francisco will now advance to play the winner of the Seahawks and Falcons game on Sunday.  It will be the first back to back appearance in the NFC Championship for the 49ers since 1993-1994. Should the 49ers and the Ravens both win next weekend it would set up the first matchup between brothers serving as head coaches of Super Bowl teams.