The Norfolk Tides travelled to Charlotte from Durham to play the Knights on Thursday and it would be a game that surprised those in attendance. The Tides started their ace Chris Tillman who will be certainly is a September call-up by the Orioles having pitched very well this year including a no-hitter and a one-hitter.  However Chris was roughed up by the Knights lasting only 2.2 innings facing 16 batters giving up 6 runs 4 of which were earned runs on 8 hits including a home run and 2 doubles.  Chris was replaced by Jim Hoey who was followed by Frank Mata who would get the win and Dennis Sarfate who would notch the save.  The trio of relievers pitched 6.1 innings giving up no runs on just 4 hits issuing 2 walks and striking out 9 Knights to keep the Tides in the game. 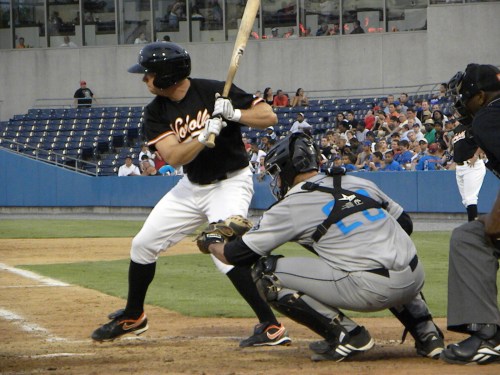 Michael Aubrey’s 19th Home Run of the Season, this time as a pinch hitter gave the Tides the lead and the win

The Tides got on the board in the 5th inning when Blake Davis singled and Adam Donachie walked.  They advanced to 3rd and 2nd when Paco Figueroa grounded out. Matt Angle reached and took second on a throwing error by Knight’s second baseman Fernando Cortez. Davis scored and Donachie went to 3rd.  Robert Andino grounded out to score Donachie and the Tides were back in the game.

The Tides scored 3 more in the 6th inning off of reliever Jhonny Nunez when Nolan Reimold walked and scored on a Rhyne Hughes double aided by a fielding error by Charlotte Center Fielder Alejandro De Aza.  With Blake Davis batting Nunez threw a wild pitch to send Hughes to 3rd with one out and then Davis doubled off of Nunez to score Hughes.  Adam Donachie popped up for the second out bringing Paco Figueroa to the plate. Paco doubled to right to score Davis before Matt Angle lined out to end the inning.

Clevelan Santeliz came in for Nunez in the 7th and took the Tides down in order leaving the score at 6-5.  However in the 8th inning things changed in an instant.  Greg Aquino relieved Santeliz and immediately stuck out Rhyne Hughes and Brandon Snyder.  Blake Davis then singled his 3rd hit of the game to keep the inning going. The brought up pinch hitter Michael Aubrey who blasted Aquino’s first pitch over the right center field wall to give the Tides a 7-6 lead.

Dennis Sarfate then pitched the 8th and 9th innings for the Tides notching his 17th save of the season.  Frank Mata (4-3 3.50 ERA) got the win for the Tides while Aquino (1-5 5.21 ERA) took the loss for the Knights. The Tides had 7 runs on 11 hits with the one error leaving 6 men on base. The Knights had 6 runs on 12 hits with 2 errors stranding 7 runners on base.  Of note was Blake Davis’ performance going 3 for 4 with an RBI the night following his grand slam in Durham. The Tides had doubles from Davis, Brandon Snyder, Paco Figueroa and Rhyne Hughes while Michael Aubrey had hit his 19th home run of the year which gave the Tides the lead and the win.  The relief pitching was superb and gave the Tides hitter the opportunity to make the comeback. The teams square off tonight in Charlotte.  Tim Bascom (2-7 7.95 ERA) will take the hill for the Tides and face the Knights’ Jeff Marquez (8-7 4.51 ERA.)  In personnel moves the Orioles optioned Armando Gabino to the Tides to make room for set up man Jim Johnson who has been on the DL much of the year.  That should help the Tides as Gabino was 7-0 and 3 saves with a 2.12 ERA.

Plop Plop Fizz Fizz Oh What a Relief it’s Not: Tides Lose 7-5 as Relievers Melt Down 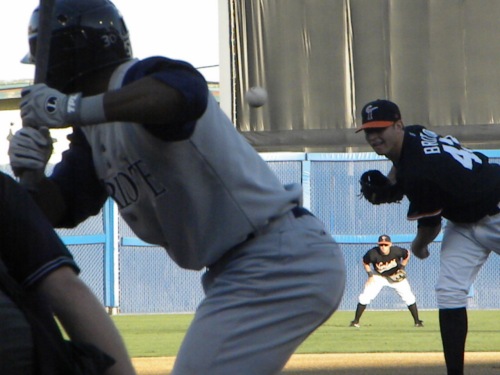 It was an absolutely gorgeous night for baseball in Norfolk with unseasonably low temperatures in the mid-70s and low humidity at Harbor Park on Thursday night, the kind of baseball weather that in this part of the country fans long to have instead of the normally hot and humid weather typical for the 1st of July. On such a night the Norfolk Tides opened a three game home stand with the Charlotte Knights with Zach Britton making his AAA debut for the Tides.

Going into the top of the 7th inning it appeared that the Tides were well on their way to a victory behind the pitching of Britton.  The young pitcher dominated the Charlotte nights and in six innings work had a shutout going allowing only three hits while throwing 45 of 70 pitches for strikes.  The young left hander was in control the entire outing striking out four and walking none as Tides hitters had given him a 4-0 lead powered by Jeff Salazar and Rhyne Hughes who each pounded out a home run over the right field wall.

Jeff Salazar hits his 14th home run of the season

With Britton being on a pitch count Manager Bobby Dickerson brought in Armando Gabino into the game in the 7th inning. Gabino who has for the most part been a lights out middle reliever this season as well as occasional starter had control problems early throwing only 15 of 27 pitches for strikes. He walked Tyler Flowers to lead off the inning and on with 2 strikes on Josh Kroeger surrendered a home run that bounced across the roof to the right field Straub Beer party deck.  Gabino then got Stefan Gartrell to pop up for the first out. Jordan Danks then singled.  The Knights then received a gift from the Tides when on a deep fly ball to right field by Fernando Cortez Rhyne Hughes dropped the ball sending Danks to third and Cortez to second with only one out. Gabino then stuck out Brent Morel before being pulled for Alberto Castillo. Castillo has had his ups and downs this season and on the first pitch he hit Alejandro De Aza to load the bases. Luis Rodriguez singled to score Danks and Cortez to tie the game before striking out Buck Coats to end the inning. 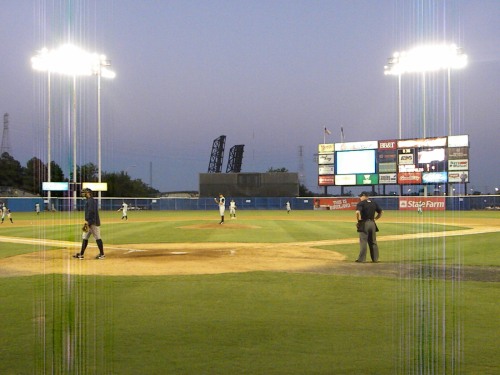 The Tides took the lead back in the bottom frame when Robert Andino singled and pitcher Carlos Torres walked both Jeff Salazar and Michael Aubrey. Greg Aquino came in for the Knights and with the bases loaded walked Nolan Reimold to score Andino.  Unfortunately for the Tides they could not take advantage of a bases loaded and one out situation. Rhyne Hughes popped up and Blake Davis struck out swinging to end the inning.  The failure to capitalize on the pitching mistakes of the Knights would prove fatal for the Tides.  Castillo got his act together to send the Knights down in order in the 8th and in the bottom of the 8th the Tides failed to bring across Matt Angle who had reached first on a 3rd strike wild pitch and advance to second when Robert Andino walked before Jeff Salazar flew out to deep right field to end the inning.

With the lead again the Tides brought in Denis Sarfate who has been lights out as a closer this year having 10 saves to his credit.  Tonight however was not Sarfate’s night. After striking out Jordan Danks Sarfate loaded the bases on two walks and a single before giving up a single to Louis Rodriguez which scored two runs and left Rodriguez in a rundown in which he was out but the third runner Alejandro De Aza to score to give the Knights a 7-5 lead that they would not relinquish as the Tides went down quietly in the bottom of the 9th with only Joey Gathright reaching base on a two out walk.

Denis Sarfate (0-1 BS-1 4.08 ERA) got the loss for the Tides while Greg Aquino (1-3 5.25 ERA) got the win and Ryan Braun his 13th save. It was a night that the Tides wasted an opportunity to win the game and gain ground on the Knights but for the miserable performance of normally solid pitchers and the huge error of Rhyne Hughes.

Tonight the teams renew the series at Harbor Park with Zach Clark (0-2 3.09 ERA) on the hill for the Tides facing Jeff Marquez (6-4 4.24).  Tonight is a salute to the Negro Leagues and both the Tides and the Knights will be wearing replica Negro League uniforms as the US Postal Service unveils a commemorative Negro League stamp set in a pre-game ceremony.

In Baltimore Jake Arietta and Frank Mata got beaten up by the Athletics as the Orioles went down to defeat at Camden Yards by a score of 8-1.

See you at Harbor Park tonight.