What Does it Mean? Will Rogers, Padre Steve & Election 2014

“The trouble with practical jokes is that very often they get elected.” Will Rogers

Last night in battle of the witless, funded by the soulless, and empowered by the clueless the American electorate finally finished the 2014 warm up for the 2016 bloodletting known as the 2016 General election. Why they call it that I don’t know, we haven’t had a general as President since Eisenhower, but I digress…

What does it all mean? Actually I don’t know, I have some ideas but there is one thing I know, it means nothing because people do not change, especially the Trinity of Evil, the politicians, pundits and preachers that work overtime to get power and maintain it for power’s sake so they can use the police power of government to enforce their will by restricting the liberties of those who do not share their views.

But this is a far deeper question than we would want to contemplate. The problem in American life and politics is that we lack any kind of historical perspective, not only about the world, but our own history and that extends across the ideological spectrum of the country, that is why over eighty years ago Rogers noted “The short memories of the American voters is what keeps our politicians in office” and why he noted “The problem ain’t what people know. It’s what people know that ain’t so that’s the problem.” Ignorance is bliss and my God there is a lot of bliss out there today…

That my friends is why no matter what party they represent we too often elect the worst examples of the human species into office; many times in the case of congressmen, for decades, or until the cows come home. Since cows like to stay out late, play cards, and drink that can be a very long time.

But we as American voters elect them and we collectively are idiots for doing so.

My God, in what civilized country could a man like the disgraced, court-martialed, convicted criminal, serial liar and Talibanesque religious fanatic like Gordon Klingenschmitt win a State Senate office in Colorado with over 70 percent of the vote? But assured that Klingenschmitt, running as a Republican but motivated by the soulless hatred of his Christian Dominionism will be around for a while. He is a megalomanic with delusions of grandeur and feelings of unjust persecution. There is a reason that he was court-martialed and thrown out of the Navy and why anyone should be very afraid that any party, including my former party, the Republicans would ever even allow someone like him to enter a race under their banner.

I guess that is one of the big reasons that I am not a Republican, too many soulless, clueless and heartless religious fanatics just like him are driving that party and the country to the abyss. Like Rogers I can now say “I am not a member of any organized political party — I am a Democrat.” But again I digress… 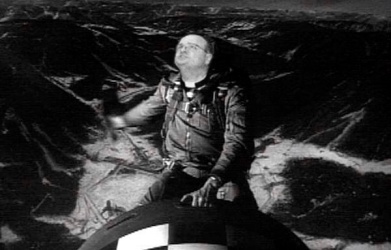 But whenever I hear the name Gordon Klingenschmitt; a man who entered the military with a political-religious agenda, dishonored his uniform, made a mockery of faith, family, slandered countless of his commanding officers and fellow chaplains in the Right Wing media; all in the name of Jesus, I get upset, and wish a pox on any political party, or voter who would elect this man or anyone else like him. Klingenschmitt and many like him are quick to label liberals or progressives as Nazis, but they are the people who have said they would, if they ever had the political power to limit the rights or people that they admittedly hate, be it for political, religious or social issues.  Their targets, Democrats, liberals, blacks, gays and lesbians, Moslems, immigrants, and any other group that they want to demonize to mobilize their base depending on their needs.

You see my friends, that is what this election meant. Yes, one can say it is a rejection of Obama and his policies by voters, but it is also, and much more importantly a return to religious fanaticism as a basis and instrument of policy among elected officials. Klingenschmitt may be an outlier right now, but he and others like him are now the face of the GOP. If you are a moderate in the GOP, get ready, you will be either pushed out or forced to adopt their extremism because theirs is a religious crusade that allows no dissent. If you are a secularist, an economic conservative or a “strong on defense” type in the GOP for whom religion is a minor concern, or something best left at home or in the churches, get ready, you too are on their hit list. The problem is that people will do anything to gain power, even make allies of guys like Klingenschmitt and the other American Taliban that are just like him.

I wonder if people will ever learn, but as Rogers said:

“There are three kinds of men. The one that learns by reading. The few who learn by observation. The rest of them have to pee on the electric fence for themselves.”

I guess there are going to be a lot of people learning by in that manner over the next two years….Let me take a deep breath and then continue…. thank you.

For those that think the election will have the effect that people Klingenschmitt and the religious fanatics like him think  that it will, think again. It has the potential of destroying the Republican party, with consequences as important and perhaps as dire as the collapse of the Whigs in 1854 and the split in the Democrat Party between 1856 and 1861. (For those that don’t know about that split it helped light the fire that became the Civil War, read some of my Civil War articles, I cover it to some degree in them.)

Some Republicans recognize this, they know that the victories last night came mostly in reliably conservative states and districts, or places that depending on the year and the situation can swing between Republican or Democrat control. Neil Newhouse who was Mitt Romney’s pollster noted yesterday that “the image of the Republican Party has actually gotten worse since the end of 2012.”

That my friends is what this election meant. Senator Rand Paul, a man who has his eyes on the white House noted: “The Republican Party brand sucks, and so people don’t want to be a Republican… why?…The problem is the perception … that no one in the Republican Party cares.” The problem is that it is no longer about perception, it is about reality. The fact is that unless one is rich, white, male, or a conservative Christian you don’t matter to those now driving the party. The attitude is “you are either for us or against us.” It is a no-compromise attitude which will be their downfall and may very well split the party if old line Republicans finally grow some balls and say no to it.

As far as hope for what the new Republican controlled Congress will do, only one in four Americans think they will do better than the split Congress that we have had the past four years and a full 40% said in that survey said that nothing would change in Washington DC. This is something that Tea Party party pundits Erick Erickson, who I am not a fan of, noted over at Politico.com two days ago:

“So while we are going to see a Republican Congress in name in January, its small-government rhetoric is certainly not going to fool or win over the party base. In 2014, the American public has shown that it hates Washington, D.C., and the Republican leaders in Washington are demonstrating why. They have assembled a team of strategists, consultants, and other political operatives who eat, breathe, and sleep Washington, D.C. Instead of standing for something, they stand for anything they think might get them back into power.

Be assured the Democrats are no gem right now, like the GOP they too have some wing nuts in the party. Though I am a Democrat there have been times that I wonder if the Democratic leadership have lost their souls and are more intent on maintaining power than solving problems. Based on the massive number of e-mails I received from Democrat and progressive organizations that I support, almost all dealing with fundraising, which ran about twenty a day during the last two months of the campaign have to wonder. Yes, I know that to fight the Koch brothers funding wars brought about by Citizens United that one has to have a lot of money, but those e-mails did not motivate me, they were annoying and disruptive.
The GOP won yesterday because it won where it was supposed to win, in states where it had the home field advantage, in states where legislatures limited the opportunities of poor, elderly, students living away from home, military personnel serving out of state as well as minority voters to vote by in effect creating a defacto-Poll Tax. But such a strategy goes back to Paul Weyrich, the co-founder of the Heritage Foundation who said in 1980:

“Now many of our Christians have what I call the ‘goo-goo syndrome.’ Good government. They want everybody to vote. I don’t want everybody to vote. Elections are not won by a majority of people. They never have been from the beginning of our country, and they are not now. As a matter of fact our leverage in the elections quite candidly goes up as the voting populace goes down.”

But in 2016, it will be a different electorate, an electorate radically different from the one that voted yesterday. The 2016 electorate will be much more favorable to Democrats, one that is not enamored with people like Klingenschmitt. They are young people who want to get ahead in life and are not concerned about someone’s religious beliefs, no fueled by racism, accepting of minorities, women, immigrants and the LGBT community. Those voters typically don’t vote in large numbers in mid-term elections, but do in presidential elections and their influence will be decisive particularly if the new GOP Congressional majority does what I expect to do by focusing on a narrow agenda that is being defined by crackpots, conspiracy theorists and religious fanatics, further driving them, as well as anyone of moderation away from the GOP. If the Democrats can get off their ass, they will keep the White House and will have an excellent chance to take back the Senate in 2016.

I am no expert, but I do know history and I know human nature. I could be try wrong about all of this, but no-matter what I am glad this election is over. The only break I got from it was going to German for the Oktoberfest, with good friends who spanned the political spectrum from left to right. It is almost enough to want to move overseas and be an expat if it means that I don’t have to listen to all of the lies and dirty campaign ads that were a staple of both parties this year. But then we can thank the Supremes and their Citizens United decision for that.

The campaign wore me out and I look forward to at least a few months of peace, before the next phase of the 2016 campaign begins.