Norfolk Tides First Baseman Michael Aubrey is definitely back in fighting form after being injured early in the season and struggling to get his form back.  Aubrey has hit 5 home runs is the past 6 games and on Tuesday he turned Harbor Park into his park hitting his 11th home run of the campaign and driving in 4 runs in a losing cause.

Tim Bascom was roughed up again for 6 runs in 1.2 innings

The game began badly for the Tides as starter Tim Bascom was shelled in the 1st and 2nd inning giving up 6 runs on 5 hits, one of which was a 2 run home run to Leonard Davis and 4 walks in just 1.2 innings work.  Bascom (2-5 7.39 ERA) who is 0-3 in his last 4 starts giving up 19 runs on 23 hits with 9 walks and 4 home runs in 13.2 innings work with a 12.27 ERA took the loss.  His last win was on June 27th against Louisville where he pitched 6 innings giving up 2 runs but living dangerously giving up 11 hits. It is possible that he could be sent back to AA Bowie to get back his confidence and work on his mechanics and if I was in the Orioles management I would do exactly that.  With Chris Tillman being optioned back to Norfolk today following the beating that he received at the hands of the Rays on Monday the probability of this move has increased.

The Tides were held in check for the first 6 innings but in the 7th came alive.  Matt Angle singled to lead off the inning and scored on Robert Andino’s 23rd double of the season.  Nolan Reimold walked to bring up Michael Aubrey who has turned into a home run machine in the past week.  Aubrey belted the ball over the right field wall on a pitch by Chiefs starter Ron Villone who was pulled from the game after the hit.  The Tides threatened in the 9th inning when Jeff Salazar walked with one out and moved to third on a single by Nolan Reimold.  Michael Aubrey came to the plate and drove in Salazar with a sacrifice fly but Rhyne Hughes struck out to end the game. 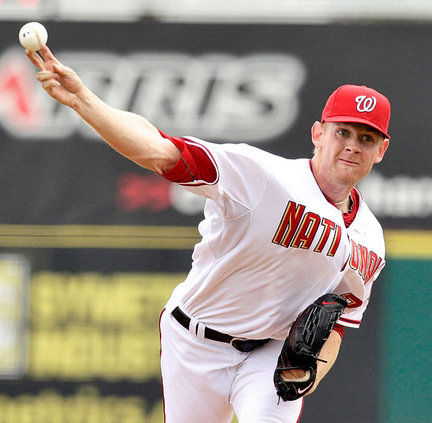 The Norfolk Tides and the Syracuse Chiefs met in the third game of a four game series on Wednesday night and the story was pitching, in particular the pitching of Stephen Strasburg.  The high sought rookie and MLB number one draft pick made his second AAA appearance for the Syracuse Chiefs as he is prepared by the Nationals organization for his Major League debut and it was a beauty.  Strasburg owned the Tides tonight and went six innings surrendering no runs and no hits, striking out seven and walking just one leaving Norfolk Tides batters wondering just what train hit them.

Strasburg also had a little help from his friends at the plate and in the bullpen. The Chiefs scored four runs in the bottom of the 5th inning and that would be more than enough to roll back the Tides on this cool, cloudy and windy night in front of 6720 fans at Alliance Bank Field on the west side of downtown Syracuse near Lake Onondaga.    Drew Storen came on in the 7th inning and pitched and and a third innings giving up a single and two walks.  Ron Villone came in with one out in the top of the 8th inning giving up just a hit and a walk.

The Tides started Troy Patton and with two outs in the 5th inning his game came apart.  After getting Pedro Lopez to hit into a 4-6-3 double play Patton walked Justin Maxwell. Former Tides outfielder Chase Lambin singled bringing up Kevin Mench who singled to left to score Maxwell and send Lambin to third.  Troy then Mike Morse walked on 4 pitches to load the bases.  Josh Whitesell took the count to 3 and 1 and then tripled to clear the bases.  Patton then retired Seth Bynum on a called third strike to end the inning.  Denis Sarfate and Alberto Castillo pitched the final two innings for the Tides allowing no runs on no hits and only a walk surrendered by Sarfate. 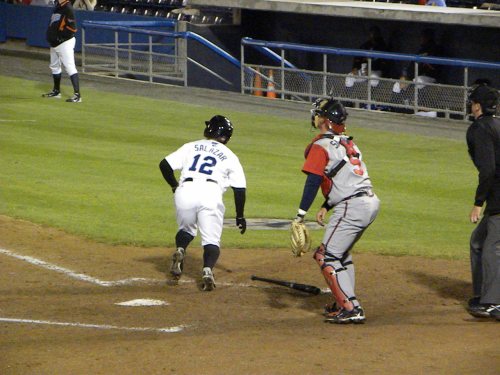 There was a personnel move involving the Orioles and the Tides.  Second Baseman Paco Figueroa was assigned to the Tides from AA Bowie while Corey Patterson who in his brief time with the Tides earned a place back on a major league roster was promoted to Baltimore and Nolan Reimold who has struggled battling a nagging heel injury that occurred in 2009 that has limited his play and effectiveness was optioned to the Tides.

Meanwhile in Baltimore it was a night for former Tides pitchers. Brad Bergeson after coming back to the O’s from a brief stint with the Tides picked up his third victory in as many starts and Alfredo Simon got his fourth save.  Corey Patterson singled and scored a run in his Orioles debut. The Orioles defeated the Mariners at Camden Yards by a score of 5-2.

Tides Fall to Chiefs 4-3 in Syracuse 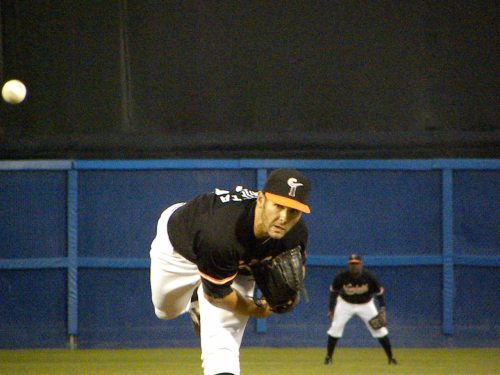 Jake Arietta pitched 7 innings but got a no decision

The Norfolk Tides travelled north to Syracuse on faced the Chiefs in the opening game of a four game series at Alliance Bank Field.  The Chiefs who are the AAA affiliate of the Washington Nationals lead the North Division of the International League with a record of 18-11 and are playing very good ball.  Even more surprising for the Nationals organization is that the Nationals have an 18-14 record and sit in second place in the NL East trailing the division leading Philadelphia Phillies by two games.

In front of a crowd of 3612 fans who braved temperatures that fell into the 40s as the night wore on and variable winds of 11 miles an hour the teams took the field.  Although it was cold the weather was nowhere near as bad as the weekend where two games between the Chiefs and the Gwinnett Braves were postponed due to winter weather including snow on Sunday. The Tides started Jake Arietta who faced Sharion Martis of the Chiefs. Arietta (3-1 1.67) pitched seven innings allowing 2 earned ruins on 4 hits.  He gave up an unearned run in the bottom of the 4th inning when after walking Josh Whitesell and then on a 1-1 count hit Mike Morris.  This brought up Pete Orr who bunted to Arietta who fielded the ball the throw was late to First Baseman Brandon Snyder but also wild which allowed Whitesell to score on the play.  Orr was given a hit on the play but Arietta the error as the throw enabled Whitesell to score and Orr to advance to second.

The Tides scored one run in the top of the 4th inning when Corey Patterson continued his ferocious hitting by launching a triple to right field and scored on a sacrifice fly to center by Josh Bell his 20th RBI of the season.  The Tides would score again and tie the game in the 6th inning.  Corey Patterson walked to lead off the inning and was followed by Josh Bell who popped up to third baseman Pete Orr in foul territory.  Scott Moore then singled and Patterson was held at second base.  To the plate came Brandon Snyder who had a key role in the Tides win against the Mud Hens on Sunday. Brandon took a called strike from Martis and then fouled tow pitches off before taking ball one.  With a 2-1 count Snyder tripled to right to bring both Patterson and Moore home to tie the score.  Justin Turner struck out swinging and when the ball got away from catcher Carlos Maldonado Snyder attempted top come home. Maldonado threw to relief pitcher Drew Storen who tagged Snyder out at the plate to end the inning. 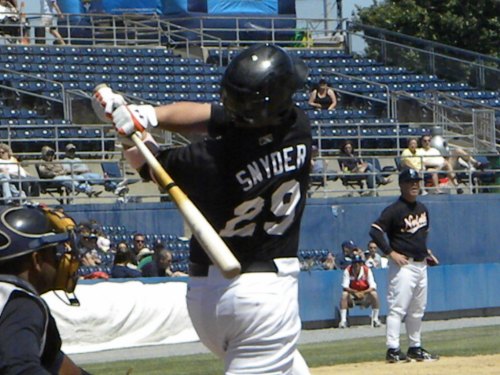 The game remained knotted at 3 until the bottom of the 8th inning. Arietta left at the end of the 7th and was relieved by Ross Wolf who has been very effective in relief this year.  Wolf faced Kevin Mensch who after working the count to 2-2 by fouling off four pitches took the seventh pitch and doubled to center.  Josh Whitesell singled to right fielder Michael Aubrey scoring Mensch.  Wolf would work his way out of the inning but the damage was done and the Tides were unable to score in the 9th inning despite a single by Corey Patterson and the Chiefs took game one by a score of 4-2.

Arietta went seven innings and got a no decision giving up 2 earned runs on 4 hits. His problem came due to control; he gave up five walks and hit one batter as well as the throwing error that cost the run in the 4th inning.  Ross Wolf (0-2 2.89)  got the loss in relief giving up one run on two hits.  Chiefs reliever Ron Villone (1-1 9.53) got the win and Joel Peralta (0-0 S8) got his eighth save of the season.  The teams meet again on Tuesday with Chris George (1-1 4.50) getting the start for the Tides and Chuck James (2-0 4.85) taking the hill at home for the Chiefs.

The Tides made a number of personnel moves over the weekend sending pitcher Jim Miller and catcher Steve Lerud to Baltimore’s short season “A” team the Aberdeen Ironbirds, and activating pitcher Denis Sarfate and catcher Michel Hernandez from the disabled list.  Pitcher Jim Johnson who had been sent down from the Orioles last week was placed on the 7 day disabled list for elbow pain.