I am again at the Medical Center on duty, but this not a bad thing.   Before I begin my post I want to direct you to the post of the Abbess of the Abbey Normal and her thoughts on this Memorial Day.  Her post is linked here: http://abbeynormalabbess.wordpress.com/2009/05/25/memorial-day-musings/

I Have also posted several links in this article. Peace, Steve+

I have been thinking a lot about the significance of Memorial Day the past week.  I think about it more now than I used to.  Now I have always thought a lot of it and observed it the best that I could.  Yet having now been “boots on the ground” in Iraq travelling about the battlefield to take care of the spiritual needs of American Marines and Soldiers serving as advisers with the Iraqi Army, Police and Border forces it has more meaning.  I am now a combat veteran.  Last year I joined the VFW.  I came back from the war different, PTSD kind of goons you up sometimes.  I spent most of the past 15 months dealing with this, not sleeping and being in chronic pain.  I’m now doing much better.  In part this is due to the support I have at home and a work and the fact that I am no longer isolated.  Being on staff at our Naval Medical Center has been good for me and I do not resent being the Duty Chaplain on this Memorial Day.  I have far too many wonderful people I work with here to think anything like that.  It is an honor to serve here with such fine people, Physicians, Nurses, Chaplains and other medical and support staff. 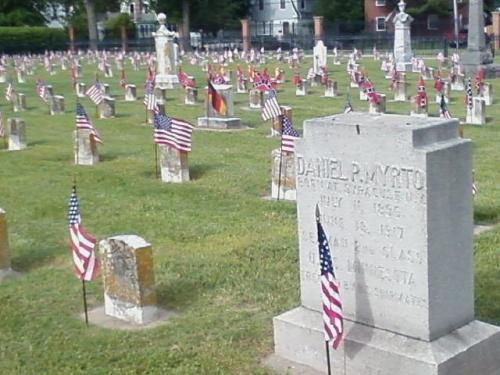 Today has been really good no matter how the night goes.  I participated in the annual Memorial Day observance at the historic Naval Cemetery on our grounds.  It is but a mere two acres of land and dates to 1838 when it was established to allow the remains of those who died far from their homes repose. It has Navy Sailors, Marines and their families.  It also holds the remains of Sailors from Great Britain, Russia, Germany, Japan and Brazil who died in the Norfolk area.  Additionally the remains of Sailors of the Confederate States Navy are buried here.  The service was organized by the Local Chapters of the Fleet Reserve Association, supported by the local Boy Scout troops and attended by veterans, active duty members and dignitaries from the City of Portsmouth City Council and a State Senator.   It was a simple yet moving ceremony which involved a wreath-laying as well as Amazing Grace played on the Bagpipes and Taps.  Our Color Guard presented the colors and our Commanding Officer, Rear Admiral Kiser was the guest speaker.  Local news services were on hand to televise it, just as they televised others services throughout the region.  One of these was on the Battleship USS Wisconsin which is the centerpiece of the local maritime museum at Norfolk’s Nauticus venue.

Our hospital is interesting.  It dates to 1826 and is the first Naval and for that matter military hospital in our country.  The motto here is First and Finest. Building One is the original hospital.  It has a glass dome which at one time lighted the operating theater.   It now is our command building with other administrative offices.  The hospital has served in peace and war and was instrumental in the 1850s in caring for the victims of the Yellow Fever epidemic.  It is now a teaching hospital and multi-faceted medical center with a national reputation.

The time at the service was neat as I mixed with our veterans of World War Two, Korea, Vietnam, Desert Storm and the current wars.  Many proudly displayed their medals, ribbons and badges.  When the National Anthem was played these men and women saluted as smartly as when they were on active duty.  Many are involved with local veterans groups and some are volunteers at our hospital taking time to care for the needs of our patients and families.  Among the dignitaries was Councilman Charles Whitehurst who is a member of the small historically black Episcopal Church where I worship.  Mr. Whitehurst enlisted in the Marines in 1955 and rose through the enlisted ranks to Sergeant, was appointed as a Warrant Officer and the Commissioned as an Officer.  He retired as a Major after Vietnam.   Afterward Admiral Kiser was the Grand Marshal of the Portsmouth Memorial Day Parade, which is the oldest and longest running in the nation.   A link to a local station’s coverage of this event is here: http://www.wvec.com/video/index.html?nvid=364992&shu=1

I was able to catch a glimpse of President Obama’s wreath laying at Arlington National Cemetery where in in short and solemn remarks he noted: “Why in an age when so many have acted only in pursuit of narrowest self-interest have the soldiers, sailors, airmen and Marines of this generation volunteered all that they have on behalf of others,” he said. “Why have they been willing to bear the heaviest burden?”

“Whatever it is, they felt some tug. They answered a call. They said ‘I’ll go.’ That is why they are the best of America,” Obama said. “That is what separates them from those who have not served in uniform, their extraordinary willingness to risk their lives for people they never met.”

I think that his remarks were perfect and honored those who serve now and those have gone before us.

The last service of this type that I attended was at the US Cemetery at Belleau Wood, France. It is the site of the battle in which the Marines in their first battle of World War One turned back the assault of the German Army which was advancing on Paris and launched a counter-attack.  I was with Marines of the Marine Security Forces who were conducting a joint memorial service with French Marines.  The next day I visited Normandy with the Marines and taught classes to them on the battle, looking at it from the German perspective.  The day prior to the service I taught parts of the “staff-ride” of the battlefield discussing various aspects of World War one tactics, weaponry and equipment. 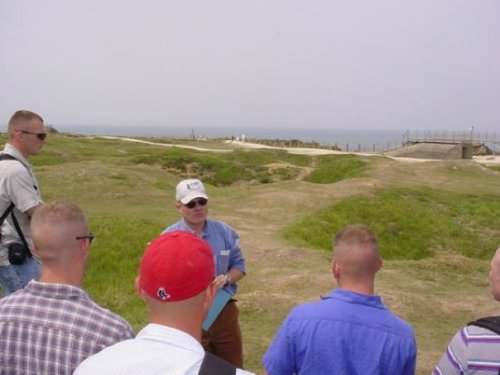 With Marines at Normandy

This is also most likely the last Memorial Day that my father will be alive.  He served as a Navy Chief Petty Officer and retired in 1974.  In 1972 he served “boots on the ground” at the city of An Loc which was surrounded for 80 days by the North Vietnamese Army.  He was my inspiration to serve in the military.  There are many veterans of World War Two, Korea and Vietnam who like him are in the twilight of their lives.  I do pray that all will be remembered this Memorial Day.  I was able to be with him the week before last.  I expect it will be the last time that I see him.

One interesting thing that I want to mention before I close was the effort that many professional ball players made back in World Wars One, Two and Korea.  Some of the top players of all time gave up some of their prime playing years to serve.  Christy Matthewson served in the Army in France during World War One. He was gassed and developed Tuberculosis and died at the age of 45 in 1925 never playing again.  Yogi Berra served as a Navy Gunners Mate at D-Day.  Ted Williams served in both WWII and Korea as a Marine Corps fighter pilot.  He lost nearly 5 seasons to his service. One who studies statistics in baseball might want to extrapolate the numbers that Williams might have had if he had played on instead of serving.  Hank Greenberg the first Jewish Major League superstar was drafted in 1940 and released just before Pearl Harbor when Congress voted to send men over 28 home. He then re-enlisted, was commissioned and served in the China-Burma-India Theater.  Joe Dimaggio enlisted in the Army Air Force and served 2 ½ years from 1943-1945. Bob Feller volunteered for the Navy on December 8th 1941 and spent 4 seasons on the USS Alabama as a gun captain. Pee Wee Reese served in the Navy in the Pacific while Jackie Robinson served as an Army Officer and Larry Doby served in the Navy before breaking the color barrier to play Major League baseball.  Whitey Ford, Willie Mays, Eddie Matthews and Ernie Banks were all called up for Korea along with Williams.  Roy Gleason of the Dodgers was the last player to earn the Purple Heart as an Army Sergeant in Vietnam. Of course the world has changed.  We have an all volunteer military no current Major League players, or for that matter NBA, NFL or NHL players serve in the military but many donate time and money to support military members and their families including Giant’s pitcher Barry Zito and Orioles pitcher Jamie Walker.  Working with USAA these men have founded a non-profit group called “Strikeouts for Troops.  A link to that organization is here:  http://video.yahoo.com/watch/3462236/9644105

Pat Tillman a defensive back for the Arizona Cardinals enlisted after 9-11 and was killed during a “friendly fire” incident while serving as an Army Ranger in Afghanistan.  He has been the only NFL, MLB, NHL or NBA player to volunteer for active duty in the current war.

Here are a few links to some baseball and veteran stories:

Link to Rick Monday’s saving the flag at Dodger Stadium in April 1976:  http://www.youtube.com/watch?v=IrV8QPQAhxo&feature=related

Let us remember our veterans, especially those who gave the last full measure to serve our country. Support the Honor and Remember flag campaign as well as the “Blue Star” and “Gold Star” families whose loved ones currently serve or have died on active duty in this time of war.