The Unfolding of Miscalculations: Syria 2015 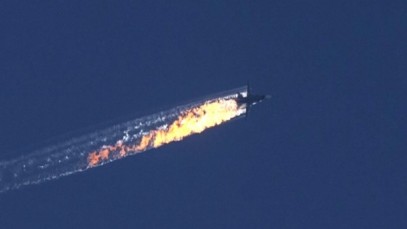 The tensions fuel by the incredibly complex and dangerous war in Syria just when up, as I like to say the “pucker factor” is very high, in fact it is getting close to stage ten. Barbara Tuchman wrote, “War is the unfolding of miscalculations” and it seems that right now there are whole a lot of miscalculations going on.

Yesterday a Russian Su-24 fighter plane was blasted out of the sky by a Turkish F-16. Reports conflict, Turkey say that the Russian aircraft had violated its airspace multiple times and had been given multiple warnings before the shoot down. The Russians claim that the aircraft was on the Syrian side of the border and that the attack was an unprovoked violation, and Russian President Putin called it a “stab in the back.” Russia is accusing Turkey of backing DAESH, while Russia’s forces, which are supposedly there to fight DAESH are spending more time attacking Syrian President Assad’s non-DAESH Syrian opposition, including Turkoman Syrians fighting the Assad regime in the area where the jet was shot down. Some think that it might be payback for the Russians bombing the faction supported by the Turks.

Admittedly, Turkey has a right to self-defense and the Russians are operating in Syria without any kind of international mandate. That being said, the Russians are there at the behest of the Assad government, which even if we don’t like it is still the legal government of Syria, a long term ally and client of Russia, going back to the old Soviet days.

However, the feud between Russia and Turkey goes back hundreds of years. They hate each other, and this hatred goes back to the days of the Tsars and the Ottomans. The hatred is generations old, and is cultural, religious and political. Maybe that is why we in the west do not understand it, but I digress…

The fact is that the actions of both nations, as well as most other nations in the West including the United States have helped to stoke the fire of the Syrian war, which is threatening to escalate into a regional conflict. I am not going to go into all the details of what has brought us to this point, because they are too many to cover. Some of course are saying that it could lead to a World War, but I do think that cooler heads will prevail. Of course I could be wrong, as Tuchman wrote, “To admit error and cut losses is rare among individuals, unknown among states.”

It is now time for President Obama to step up to the plate, and not rattle sabers, but to help pull everyone back from the brink. He needs to work with Russia’s President Putin to deescalate the crisis. Since everyone involved has a stake in what happens it Syria it cannot be ignored. The nations involved need to sit down and come up with a way to defeat DAESH and bring peace to Syria and Iraq. Of course this is easier said than done, especially since bullets are flying, blood is flowing, and tensions rising. The fallibility of human beings has been demonstrated time and time again in this war, and as Tuchman wrote in The Guns of August, “Human beings, like plans, prove fallible in the presence of those ingredients that are missing in maneuvers – danger, death, and live ammunition.”

In 1962 President Kennedy faced the real possibility of nuclear war with the Soviet Union during the Cuban Missile Crisis. Kennedy had just read Tuchman’s The Guns of August which had just been published. He was shocked by the words of German Chancellor Bethmann-Hollweg who when asked how World War One started replied “Ah, if only one knew.” Kennedy asked General Curtis LeMay what would happen if the Soviets did not back down, and the officer replied that he would order a nuclear strike. Kennedy could not go down that road, he referred to the book when he remarked, “If this planet is ever ravaged by nuclear war—if the survivors of that devastation can then endure the fire, poison, chaos and catastrophe—I do not want one of these survivors to ask another, “How did it all happen?” and to receive the incredible reply: “Ah, if only one knew.”

The downing of this Russian jet shows just how easily things can spin out of control. It is time for calmer heads to prevail and walk this back before things get really out of hand.