Don’t call it a failure to launch but a failure to fly. Tonight the rocket shot to commemorate the 100th anniversary of the birth of the Most Beloved High Great Celestial Leader Kim Il Sung broke apart and crashed about 90 seconds into its flight. Debris crashed into the Yellow Sea about 165 km west of South Korea. Reports from South Korea say that South Korean Naval vessels are searching for debris which would help it to further understand how well developed North Korean missile technology really is.  Be assured that North Korean ships will likely speed to the scene which could trigger naval clashes between the two states.

The rocket called the Unha-3 was launched at 0739 local time from the missile facility at Tongchang-Ri.  Based on the Taepodong ballistic missile the three stage Unha-3 was to launch the Kwangmyongsong-3 weather satellite into a Polar orbit. Or that was the story  told by the North Koreans who had allowed numerous western reporters to visit the site and see the satellite. Most Western, South Korean and Japanese analysts believed that the launch was more of a cover to test a longer range ballistic missile which could provide North Korea with the capability to strike the United States.

Kim Jong Un and his Generals give each other the Clap

North Korea defied warnings from the United States, Japan, South Korea and the United Nations in launching the rocket.  Speculation runs rife as to the motives of the North Koreans for launching. With the recent ascent of the young and inexperienced Kim Jong Un the grandson of Kim Il Sung and son of Kim Jong Il to the leadership of the nation it is possible that Kim Jong Un went ahead with the launch in order to show his strength in defying international sanctions and condemnation. South Korea described the launch as a “grave provocation” while Secretary of State Hillary Clinton said “This launch will give credence to the view that North Korean leaders see improved relations with the outside world as a threat to the existence of their system” and warned “And recent history strongly suggests that additional provocations may follow.”

The North Koreans had invited in over 100 journalists from around the world to report on the launch, a clear departure from previous very secretive launches.  Reports indicate that instead of getting briefings about the launch that North Korean minders when asked about the failure shrugged and ran away and that a scheduled press conference was cancelled. 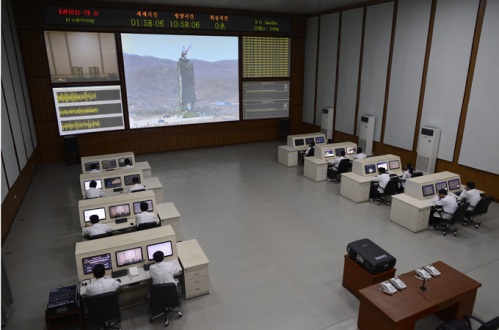 Pyongyang we have a problem…

Since the North publicized the launch the regime will have to determine how it will advertise the failure to the world and its people.  It would have a hard time admitting any technical mistakes so look for the regime to either blame the South Koreans or Americans for shooting it down.  Another option is to declare this an act of sabotage carried out by traitors or western agents.

The implications of this failure could be dangerous. There could be internal political ramifications in North Korea which could destabilize the regime or trigger conflict with South Korea and its allies. It could speed up a suspected nuclear weapons test and bring about even great tensions. Consequences for the designers, builders and managers of the Unha-3 program will probably be severe. If I were a North Korean rocket scientist involved with the project I would make sure that I paid my life insurance premium in full and make a run to the Chinese border.

Since little is known about the internal political struggles except that the North Korean Military is the most powerful institution in the impoverished country it is hard to determine what will happen next. One thing that can be said is that the launch and its failure will serve to ratchet up tensions and add to the uncertainty on the Korean Peninsula and in the region.

Maybe it is fitting that the anniversary of Kim Jong Il’s birth happens to be the same as the sinking of the Titanic. Obviously there will be much more to come…