When I Knew Everything: Me in August 1983 following completion of the Medical Service Corps Officer Basic Course

“It’s what you learn after you know it all that counts.” Earl Weaver

When I was commissioned as a Second Lieutenant in the US Army back in 1983 I knew that I was quite possibly the smartest new Lieutenant in the Army.  In fact in just a few days I will celebrate the anniversary of that auspicious occasion as I do most occasions by going to Harbor Park where I will see the Tides play the Lehigh Valley Iron Pigs, AAA affiliate of the Phillies. But anyway, back to how smart that I thought I was back then.  I graduated from my Medical Service Corps Officer Basic Course fairly high in my class without really trying too hard, had a pretty easy time at the Junior Officer Maintenance Course.  However, those were schools and anybody with half a brain can tell you that going to school is kind of like artificial real life.  Yeah, you may be doing the living and breathing stuff, sucking up food and band width, but it is not real life.  If you show up on time, read a little bit and take good notes you pass and move along.

However, real life has a tendency to take the smartest of the book smart people and kick their ass.  Sometimes it takes a while but young guys in the military who think they know more than old dudes who have served on all kinds of places and been to combat.  When I was the young guy there were still a fair amount of men who had served in Vietnam and even a few from Korea still in service.  Now these guys were a mixed bag.  Some had seen better days and were on what we referred to as the ROAD (Retired On Active Duty) program.  Others though were totally professional and absolutely committed to the Army and their soldiers, guys like SFC Harry Zilkan, 1SG Jim Koenig and Colonel Donald Johnson. These men were amazing, and even some of the ROAD program soldiers and officers still knew a lot more than I knew at that point.

When I got to Germany I can say that there were a number of occasions where as a young officer I had my ass handed to me, even when I was right.  I’m not going to go into ugly details but it suffices to say that a good number of those times I got what I deserved because I was arrogant and not nearly as smart as I thought I was.  I was like a rookie pitcher thinking that my stuff was unhittable and finding out that guys who had played in the show for a long time had seen it all before.  It was in Germany that I found that while I had good stuff that I wasn’t savvy enough to know when to change my stuff up or when to take the hint not to keep pushing my luck.  I was kind of like Ebby Clavin LaLoosh in Bull Durham in wanting to do what I wanted to do. 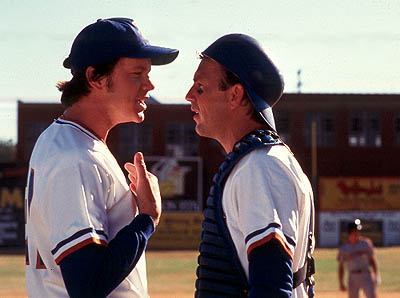 I want to give him the heat and announce my presence with authority!

[after Ebby didn’t listen to Crash, and the ball became a home run]
Ebby Calvin LaLoosh: You told him didn’t you?
Crash Davis: Yup.

You having fun yet?

That was me as a young officer.  You would think that I would have learned, but after I became a Army Chaplain I did the same damned thing.  Now admittedly it was not in the units that I served in, but my hotheadedness still got me in trouble especially when I decided to challenge guys who had been around a long longer than me and who were a lot more savvy than me.  I had no idea how cunning and brutal some chaplains could be despite having good warning from my XO and Brigade commander at the Academy of Health Sciences, LTC Jim Wigger.  LTC Wigger pulled me aside one day shortly before I left active duty to go to seminary.  He told me “Steve, I know that you think that the Medical Service Corps can be political and vicious, we can’t hold a candle to the Chaplain Corps.”  I should have listened to him. He was right, a lot of those guys were political animals and had no problem taking down or destroying a young chaplain if they thought that they needed to do so.  I got whacked pretty hard a number of times as a young Army Chaplain, but was fortunate that people who knew me and saw potential in me gave me some top cover and protection.  Not everyone gets this.  The Deity Herself must have taken an interest in my career to ensure that there were some guys around to save me from me. Chaplain Rich Whaley did this for me at the Chaplain school on a number of occasions even the time that I got thrown out of the Chaplain Officer Advanced Course (See one of my previous posts to read about this one.)

Thankfully by the time I had spent 17 ½ years in the Army I had learned my lessons.  By the time I got to the Navy I had pretty much discovered when and under what circumstances that I could push things.  I had learned the hard way in the Army.  I finally learned that I didn’t know nearly as much as I thought I did.  In fact when I went to the Navy I came in at a lower rank that my Army rank and took no constructive credit to try to get promoted sooner.  I went in with no time in grade to make sure that I got the experience that I needed on the Navy and Marine side.  When doing this I took the time to learn the nuances that made the work of a chaplain different in the Sea Services than in the Army.  While there are similarities even the similarities are often different.  These different similarities can kill you if you think that you’re smarter than everyone else.

I’m now coming up to 26 years of commissioned service and soon to 28 total years of service.  I’m now a lot more like Crash Davis than Ebby Calvin “Nuke” LaLoosh.  In fact now I try to make sure the young guys chaplains and non-chaplains alike don’t get themselves in unnecessary trouble by assuming that they know more than they do.  I have a dear friend who is an Army Chaplain. In his first three years in the Army he has won two Bronze Stars in Iraq.  He will probably be medically retired soon because of a rare pulmonary and respiratory problem that he developed in Iraq.  He was initially supposed to come in the Navy, until just before his care board met a washed up ROAD program chaplain supervising him on an OJT tour decided to torpedo him.   It was crushing to my friend.  He would have been a great Navy and Marine Corps Chaplain.  I helped him recover and assisted him going to the Army.  In his formation I used to require him to watch baseball movies and read books about baseball, and like Crash Davis I would call him “Meat.”  The guy is a gem; the Army is going to lose a superstar when he is medically retired.

Anyway, my mission now is to help the young guys along and continue to keep myself both in the game and always learn something new to keep me sharp and to help others. It’s like Master Yogi once said “In baseball you don’t know nothing.”  I’m sure that the Deity Herself would agree.