“Revisionist” History and the Rape of Nanking 1937 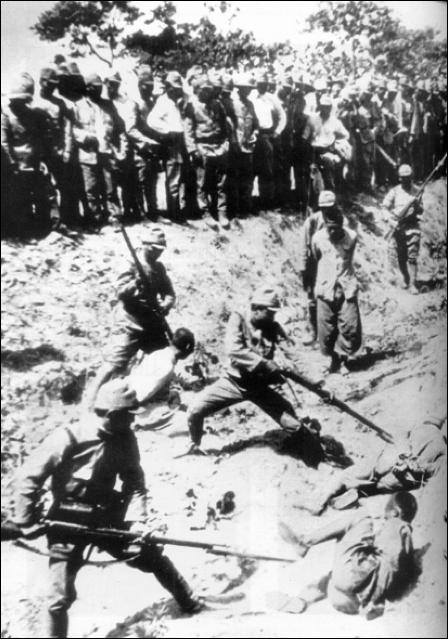 Japanese Soldiers at Work in Nanking

The historical controversy regarding the “rape” of Nanking in 1937 by the Japanese Army is hotly debated.[1] The massacres occurred in the initial occupation of the city and the two months following in mid December 1937.  The initial reaction to the actions of the Japanese was reported by western journalists and even a German Nazi Party member by the name of John Rabe who assisted in protecting Chinese during the massacre and reported it on his return to Germany.The action shocked many in the west and helped cement the image of the Japanese being a brutal race in the west.

The controversy’s visibility has been raised since the 1997 publication of Iris Chang’s The Rape of Nanking. However, with few exceptions the incident had received little attention by Western historians until Chang’s book was published. The reason for this was  that  China was a sideshow for for the United States and Britain throughout much of the war. When Chiang Kai Shek’s Nationalists were overthrown by the Communists in 1948 the incident disappeared from view in the United States.   The  United States government  reacted to the overthrow of Chaing by helping to rebuild Japan and rehabilitate the Japanese while opposing the Chinese Communists.  In fact it was only “after the Cold War was the Rape of Nanking Openly discussed.”[2] 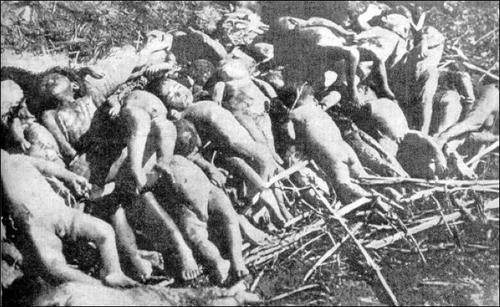 Bodies of Children Killed by the Japanese at Nanking

Chang’s book was instrumental as it brought new attention to the actions of the Japanese Army in the slaughter of Prisoners of War and civilians following the occupation of the city.  Even as Chang’s work was published “revisionist” works began to appear in the 1980s which have either denied the atrocities, sought to minimize numbers killed by Japanese Forces or rationalized the them began to appear in Japan.  The revisionists were led by Masaaki Tanaka who had served as an aide to General Matsui Iwane the commander of Japanese forces at Nanking.  Tanaka denied the atrocities outright calling them “fabrications” casting doubt upon numbers in the trial as “propaganda.” He eventually joined in a lawsuit against the Japanese Ministry of Education to remove the words “aggression” and “Nanjing massacre” from textbooks, a lawsuit which was dismissed but was influential to other revisionists and Japanese nationalist politicians and publishers.[3] 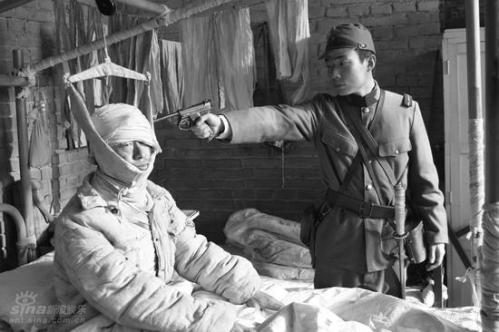 Most early accounts of the occupation and war crimes have used a number of 200,000 to 300,000 victims based upon the numbers provided during the War Crimes Trials of 1946.[4] Unlike the numbers of victims of the Nazi Holocaust the numbers are less accurate.  Authors who maintain the massacres such as Chang and others such as Japanese military historian Mashario Yamamoto who admits Japanese wrongdoing and excess but challenges the numbers use the same statistical sources to make their arguments.  Chang not only affirms the original numbers but extrapolates that even more may have been killed as a result of the disposal of bodies in the Yangtze River rather than in mass graves away from the city as well as the failure of survivors to report family member deaths to the Chinese authorities.[5] She also notes contemporary Chinese scholars who suggest even higher numbers. 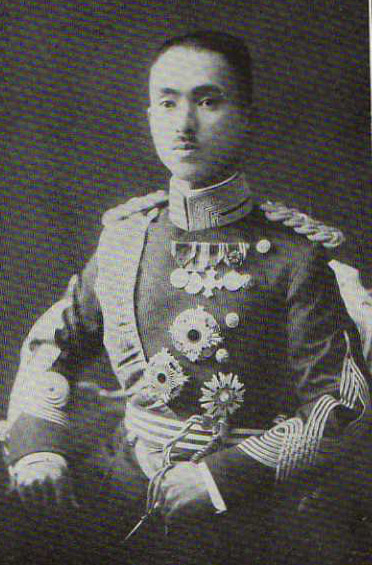 Herbert Bix discusses Japanese knowledge of the atrocities in detail up and down the chain of command including Prince Asaka, granduncle of Emperor Hirohito who commanded troops in Nanking, the military and Foreign Office, and likely even Hirohito himself.[6]

German National and Nazi Party Member John Rabe Protected Chinese at Nanking and Reported His Experience to the German Government.  He is known as “The Good Man of Nanking”

The publication of German citizen and witness to the massacres John Rabe’s diaries in 2000, The Good Man of Nanking, provided an additional first hand account by a westerner who had the unique perspective of being from Japan’s ally Nazi Germany.  His accounts buttress the arguments of those like Chang who seek to inform the world about the size and scope of Japanese atrocities in Nanking.

A Field of Skulls at Nanking

Yamamoto who is a military historian by trade and is viewed as a “centrist” in the debate, places the massacres in the context of Japanese military operations beginning with the fall of Shanghai up to the capture of Nanking. Yamamoto criticizes those who deny the massacres but settles on a far lower number of deaths, questioning the numbers used at the War Crimes Trials. He blames some on the Chinese Army[7] and explains many others away in the context of operations to eliminate resistance by Chinese soldiers and police who had remained in the city in civilian clothes. He  claims that  “the Japanese military leadership decided to launch the campaign to hunt down Chinese soldiers in the suburban areas because a substantial number of Chinese soldiers were still hiding in such areas and posing a constant threat to the Japanese.”[8] David Barrett in his review of the Yamamoto’s work notes that Yamamoto believes that “there were numerous atrocities, but no massacre….”[9] Yoshihisa Tak Mastusaka notes that while a centrist Yamamoto’s work’s “emphasis on precedents in the history of warfare reflects an underlying apologist tone that informs much of the book.”[10] Revisionist work also criticizes the trials surrounding Nanking and other Japanese atrocities.  An example of such a work is Tim Maga’s Judgment at Tokyo: The Japanese War Crimes Trials which is critiqued by historian Richard Minear as “having a weak grasp of legal issues” and “factual errors too numerous to list.”[11] Such is a recurrent theme in revisionist scholarship, the attempt to mitigate or minimize the scale of the atrocities, to cast doubt upon sources and motivations of their proponents or sources, to use questionable sources themselves or to attribute them to out of control soldiers, the fog of war and minimize command knowledge as does Yamamoto. Politics is often a key motivating factor behind revisionist work. 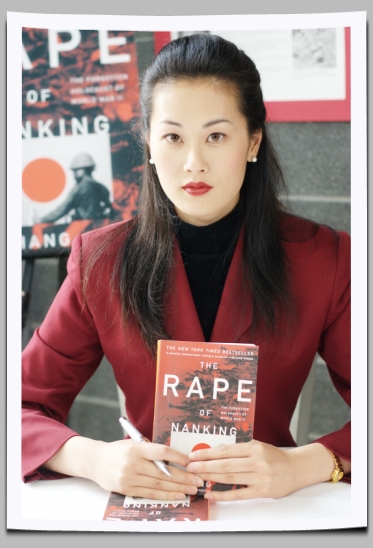 Chang would never be the same after researching and writing the Rape of Nanking. Traumatized by what she had learned and burdened by the weight of what she had taken on she killed herself on November 9th 2004.

Iconic Photo of Japanese Acts in China: A Wounded Child at Shanghai Station

“Revisionist” history will almost certainly remain with us, so long as people study the past.  However one has to be careful in labeling a divergent view of a historical subject as necessarily revisionist.  There are occasions when new evidence arises and a “new” or “revisionist” work may actually disprove previous conclusions regarding historic events or persons.  This might occur when what we know about a subject comes from a single or limited number of sources who themselves were limited in what they had available for research and new evidence comes to light. At the same time where numerous sources from diverse points of view attest to the genuineness of an event, the revisionist’s theses should be themselves scrutinized based on evidence presented as well as their political, ideological or racial motivations.  While one does not want to silence voices of opposition to prevailing beliefs one has to be careful in examining their claims, especially when they arise in the context of political or ideological conflicts.

[1] Bix, Herbert P. Hirohito and the Making of Modern Japan, Harper Collins Publishers, New York, NY 2000. pp.333-334. Bix does a good job explaining the number of victims of the incident drawing on Chinese and Japanese sources.

[2] Kreuter, Gretchen. The Forgotten Holocaust in The Bulletin of Atomic Scientists, March-April 1998 p.66

[4] Toland, John. The Rising Sun: The Rise and Fall of the Japanese Empire 1936-45. Random House, New York, NY 1970 pp. 50-51. Toland in his brief discussion of the massacres notes both the civilian casualty figures and figures for male citizens of military age who were slaughtered.  Toland also notes the large numbers of women raped by Japanese soldiers.

[5] Chang, Iris. The Rape of Nanking: The Forgotten Holocaust of World War II Penguin Books, New York, NY 1997 pp.102-103. Chang has been criticized by some historians in a number of ways including that she was not a historian, that she compares the atrocities to the Nazi Holocaust and her emotional attachment to the subject which may have been a contributing factor in her 2004 suicide.

[7] Yamamoto, Masahiro. The Rape of Nanking: Anatomy of an Atrocity. Praeger Publishers an imprint of the Greenwood Group, Westport, CT 2000. http://site.ebrary.com/lib/apus/docDetail.action?docID=10018001&p00=nanking  p.83

Filed under History, Military, world war two in the pacific

48 responses to ““Revisionist” History and the Rape of Nanking 1937”