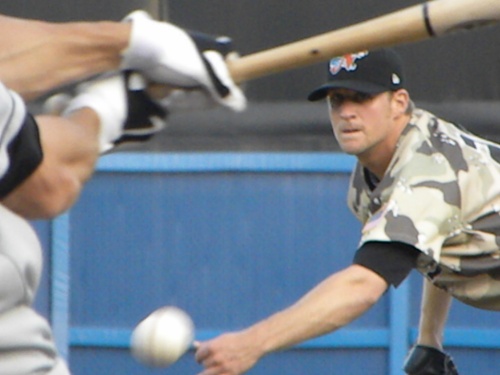 Troy Patton notched his 6th win against the Gwinnett Braves

The Norfolk Tides suffered a bit of a letdown after taking the last three games of their seven game set against Charlotte on Tuesday night losing to the Gwinnett Braves by a score of 9-4.  Tides starter Zach Britton (0-1 2.53 ERA) gave up 4 runs, 3 of which were earned on 7 hits while striking out 4 and walking 2. The Tides had 9 hits in the game and collected 5 walks from Braves pitchers but left 9 men on base including 6 left in scoring position the bulk of their runs coming in a 3 run 8th inning but it was not enough as Charlotte hitters dominated Tides pitchers in the first game of their four game series at Cool Ray Field.  The Braves were doing the tomahawk chop on Tuesday on the Tides collecting a total of 14 hits while capitalizing on 2 Tides errors and 6 walks.   Mike Minor (2-0 1.42 ERA) got the win for the Braves.

Robert Andino went 2 for 4 but had 4 RBIs

On Tuesday night the Tides struck back and struck back hard. Behind excellent pitching of Troy Patton (6-8 4.67 ERA) who has continued to get better as the season has worn one and finally is getting run support from the offense.  Patton pitched 7 strong innings giving up 2 runs on 4 hits. Walking just 1 and striking out 3. He yielded to Pat Egan who allowed no runs and a hit in the 8th and Denis Sarfate who allowed no hits to close the game in the 9th.  The Braves pitching staff on the other hand was smacked down hard by the Tides hitters. Starter Jo Jo Reyes did a good job lasting 6 innings and giving up just 2 runs on 9 hits striking out 8 Tides batters getting out of a number of jams. However the Braves could not spell “relief” and in the 7th inning Cory Gearrin (0-4 4.80) was blasted for 6 runs on 4 hits including a two run home run by Nolan Reimold and a double by Rhyne Hughes as well as 2 walks. Gearrin lasted but two-thirds of an inning and was relieved by Scott Proctor. Proctor got the 3rd out but gave up a run on 2 hits in the 8th.  Vladimir Nunez came on in the 9th and surrendered another run before getting out of the inning. 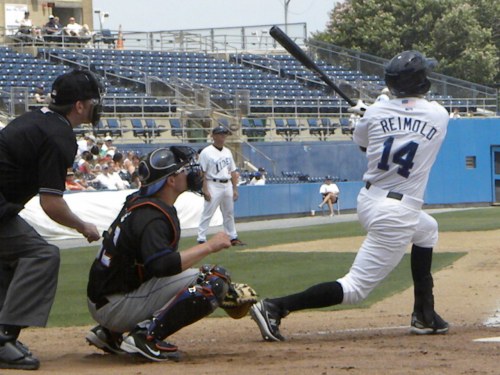 Besides the Tides pitching the story was the hitting of the Tides. The Tides relentlessly pounded out 17 hits in the game in scoring the 10 runs.  For the first time that I can remember every Tides batter had a hit and a good number multiple hits.  Matt Angle went 3 for 4, Robert Andino 2-4 with 4 RBIs, Rhyne Hughes 2-5 with an RBI, Adam Donachie 3-3 with an RBI and Jonny Tucker 3-4 with 3 RBIs.  Nolan Reimold had a single hit the home run while Paco Figueroa and Blake Davis each picked up hits.

The Tides scored twice in the 3rd inning on a series of singles, but the big damage came in the 7th inning against Cory Gearrin.  Jonny Tucker walked and went to third on a wild pitch. Matt Angle walked and was followed by Robert Andino who singled to score Tucker.  Michael Aubrey came to the plate and singled to score both Angle and Andino taking 2nd on an error by Center Fielder Jordan Schafer.   This brought up Nolan Reimold who belted a home run to left field scoring him and Aubrey.  Rhyne Hughes then doubled and scored on a sacrifice fly by Adam Donachie.  Tucker doubled to lead off the 8th inning advanced to 3rd on a Matt Angle single and score on a sacrifice fly by Robert Andino. In the 9th inning Adam Donachie doubled and scored on a single by Blake Davis.

Chris George was reassigned to AA Bowie and former Tides reliever Ross Wolf who had been traded last month to the A’s AAA farm team the Sacramento River Cats had his contract purchased by the A’s and is now on that major league club. All the best to Ross in Oakland.  Brandon Erbe, Kam Mickolio and Brandon Snyder all remain on the disabled list.

Until the next time,