Gaddafi Taunts the West and Kills his People: Our inaction speaks so loud he can’t hear a Word that we are Saying 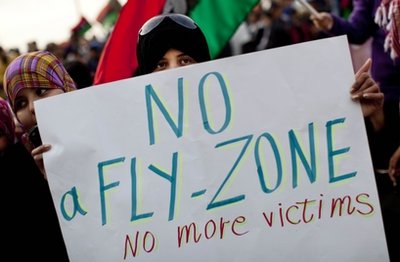 Back when I was a sophomore in high school I played my one and one season of organized tackle football. I wasn’t very good and after seven weeks of not getting to play in a game, the last of which was a blowout where everyone got into the game but me I went to the coaches’ office in a rage. I confronted Coach Duke Pasquini demanding to know why I didn’t get in the game and he simply said “I can’t hear you.” So I complained louder and he repeated what he had said. That angered me so I was screaming and he finally said “your actions speak so loud I can’t hear a word you are saying.” I was dumbfounded as he told me that the reason that I wasn’t playing was that I my words didn’t match my play during practice.  It wasn’t until I took my anger out on the practice field and pushed harder than I ever thought possible that I got to play. Coach Pasquini taught me a valuable lesson with a lot of application for Western Leaders including President Obama.

That lesson is not to make pronouncements that you are not willing to back up with force. Unfortunately over the past two weeks statements by Western leaders as well as their actions of freezing assets and investigating the Gaddafi’s for war crime charges has emboldened the rebels and hardened the resolve of Gaddafi and his family.  In a nearly euphoric advance the rebels advanced to areas that they could not control if Gaddafi offered real resistance. Likewise when Gaddafi realized that the West was divided and unlikely to take action be it a no-fly zone or any assistance to the rebels he began an offensive that has devastated cities that the rebels had controlled and caused grievous casualties to civilians.  Gaddafi’s son Saif al Islam Gaddafi promised that the regime was coming after the rebels even the eastern part of the country using ground forces and air power.  He knows that he has a free hand until NATO and the Arab League or African Union decide to act even without a UN mandate as NATO did in Bosnia and Kosovo or the United States did in Iraq. He is openly taunting the United States, NATO and the international community and reveling in it. He has called our bluff.

The tide has turned against the rebels and in a war of attrition they cannot win unless the Libyan military switches sides, which does not seem likely in the light of international dithering.  The Libyan military after a period of wavering and defections appear to have fallen in line with Gaddafi even if they despise him.  Since that is the case Gaddafi now has the upper hand and unless Western Leaders, including President Obama back up their words the rebellion will be crushed a humanitarian catastrophe unleashed and a brutal dictator validated. 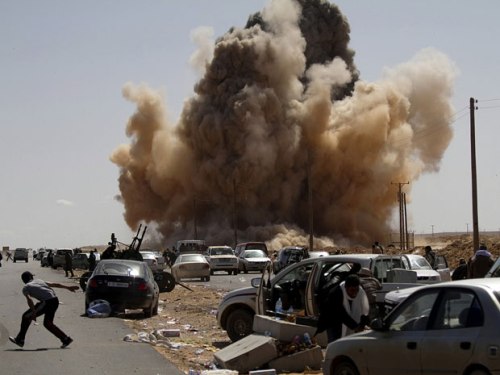 Now it is true that the United States above all nations must act with prudence because of our Iraq and Afghanistan adventures which have made the Administration shy away from any more military actions in the Muslim World. In fact we are overcommitted everywhere and there is a good reason militarily and politically not to go in.  That reason is simply that many radicals in the Islamic World will use it against us in a propaganda campaign and that is exactly how Gaddafi is already portraying the situation. Of course an air campaign which would begin with a no-fly zone should one be authorized would likely end up in bombing Libyan air defense installations and bring about what Gaddafi rightly calls a war. As a result the administration has for now decided not to act and to wait for the Europeans and the United Nations to take the lead. That inaction has emboldened Gaddafi and that inaction will turn Libya into a more important conflict than we ever wanted it to be.

If we do nothing after making a big show of calling Gaddafi a war criminal, freezing his assets and boldly stating that he has to go and the revolt fails then we will be seen by the same people that would condemn military action as weak.  This result would embolden tyrants and give our real enemies, Al Qaeda and Iran new life. Al Qaeda had been frozen out of the revolutions to this point but when those dying for freedom realize that we are all talk they will turn to the radical side to overthrow despotic regimes and when those regimes fall those that take power will not be our friends.

While doing something is fraught with peril the cost of inaction is worse and we could lose every Arab Ally that we have had for decades in a very short time. It will mean astronomical oil prices and collapse economies already weakened by the world wide banking and real estate crises. Israel will then be in the middle of a potential regional war because anti-western zealots will certainly carry their crusade against the Jewish state. There will be no more cold peace between the Arabs and Israel.

At least in the absence of US or NATO action French President Nicholas Sarkozy has recognized the provisional rebel government and is setting up an embassy in Benghazi and suggesting air strikes. British Prime Minister David Cameron is also pushing for action. The possibility is that some parts of the international community will take action but that is not certain. There are reports that the Libyan Provisional council is in clandestine talks with the United States.  If so that would be a start.

The reality is that this situation will not end well no matter what course of action is taken. The fact is that no matter which course the situation in Libya takes is that it is likely to spiral into a regional war with terrible consequences for everyone.  Americans will feel the pain of this in a big way when the oil prices go through the roof and the economy tanks.

Yes, our actions speak so loud that Gaddafi and the world can’t hear a word that we are saying.