June 5th 1944 the Eve of D-Day: Rommel Goes Home for a Birthday Party

At Chateau La Roche Guyon on the River Seine Field Marshal Erwin Rommel bid farewell to his staff. The weather was miserable and it looked as if the Allies under General Eisenhower would be forced to postpone any invasion of France for several weeks. Rommel, who had been constantly at war away from his wife Lu and son Manfred for most of the preceding five years decided to take a few days of leave, after all June 6th was Lu’s birthday and he decided that he would spend it with her. He had even purchased a pair of shoes in Paris to give as a gift.

His Chief of Staff, General Hans Speidel bid Rommel, his aide de camp and driver farewell as they drove off in his Horch staff car. Of course it was the correct decision. The weather appeared completely unfavorable to an invasion, however the Germans, deprived on long range weather forecasts for the loss of ships and weather stations in the Atlantic and Greenland did not know that the Allies had discovered that the weather would moderate for about 24 hours beginning the night of the 5th and morning of the 6th. Eisenhower made the decision to invade on the 6th of June. The Germans, continued normal planning and training in anticipation that the long awaited invasion would not occur for two to three weeks. Many other German commanders were either on leave or involved in war games and exercises away from their headquarters. 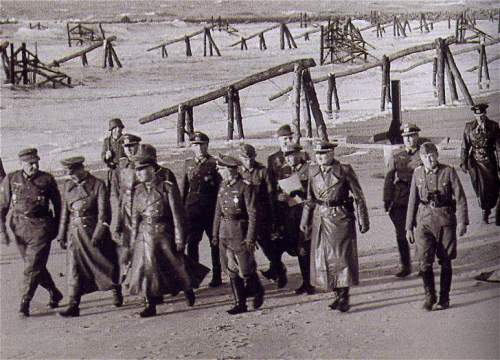 In the early morning hours of June 6th Allied paratroops from three Airborne Divisions, the 1st British and American 82nd and 101st began landing in Normandy. At dawn on June 6th troops from 6 Allied Divisions began amphibious landings at five invasion beaches, Gold, Juno and Sword in the British sector and Omaha and Utah beach in the American sector.

Speidel called Rommel at his home early on the 6th of June to inform him of the landings. Hitler had limited Rommel and other German commander’s ability to respond to an invasion by keeping the authority to commit the German armored reserve to himself. By the time Rommel arrived back at La Roche Guyon on the night of June 6th tens of thousands of Allied troops from six Infantry and three Airborne Divisions were reinforcing their beach heads and supported by overwhelming naval and air forces were driving inland. The forces that Rommel immediately commanded were sufficient to slow the Allied advance but not to throw the invaders back into the English Channel.

The campaign for Normandy would devolve into a war of attrition that would end with the Allied breakout at St Lo in July. That event coincided with Rommel being severely wounded in an Allied air attack on July 17th and the attempt on Hitler’s life July 20th. In the succeeding days with their command structure paralyzed by Hitler’s retribution against those or implicated in the attempt on his life, who included many commanders and staff officers in France fighting the Allies. 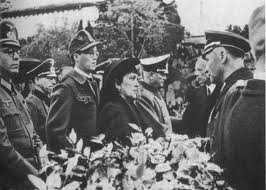 Rommel’s Wife Lucy and Son Manfred at his Funeral

Rommel would also be implicated in the attempt on Hitler’s life and would die at his own hand on October 17th 1944 after being offered the choice between suicide or a trial in which he would be found guilty and his family endangered.

One wonders what might have happened had Rommel been present in Normandy when the Allies landed. Perhaps history would have unfolded in a number of different ways. The results might have been the same, perhaps the Germans under Rommel would have succeeded in throwing the Allied forces back into the sea, and perhaps the victor of Normandy might have been able to help overthrow Hitler and end the war. Of course we will never know.

What we do know are the facts. Rommel spent a few hours with his wife on her birthday before having to travel back to Normandy without getting the chance to try to persuade Hitler to change the command arrangements that might have changed the outcome of the invasion. We know that deprived of the ability to control all of the key forces in his operational area, especially the Panzer Divisions and without the Luftwaffe being able even to contest Allied air superiority that Rommel, the legendary Desert Fox was condemned to fight a desperate defensive struggle against an enemy who control the seas, the skies and seemingly had unlimited resources. We also know that he was involved in the plot to kill Hitler and paid with his life for his involvement. 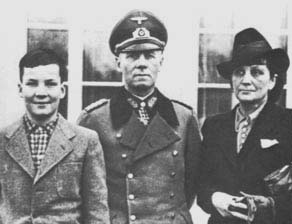 Rommel with his Wife and Son

Rommel is one of those tragic figures in history. A man caught up in the excesses of his era who discovered how the leader that he had sworn a loyalty oath to had betrayed his country and millions of his fellow soldiers. Rommel discovered the lies of his leaders too late. He like many soldiers in so many wars assumed that they could be trusted. When he discovered that they could not he took the chance to oppose them and was murdered by them.

Of course Rommel had flaws. He was an opportunist at times and did not oppose Hitler in the early years. In fact much of his fame was due to the propaganda of Josef Goebbels who exploited Rommel’s military success in Africa. However it was in Africa that Rommel began to see the truth about Hitler, the seeds of which led to his involvement with those who plotted Hitler’s death and lead him to his own death. Rommel, like so many military leaders before and after him had feet of clay.

Disillusionment with the lies of my leaders that took my country to war is something that I experienced between the attacks on September 11th 2001 and my return from Iraq in February 2008. As such, as a man who has spent the bulk of the last 11 1/2 years of war away from his wife who discovered that his leaders lied about wars and their cost, moral, physical and economic I feel a certain kinship with Field Marshal Rommel. I can understand why he took the chance to take a few days of leave to spend it with his wife.

War is a terrible thing.