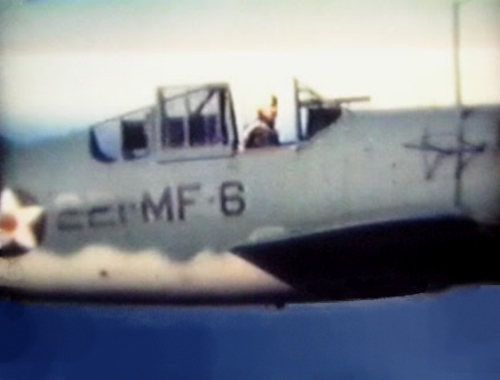 One of the more overlooked aspects of the Battle of Midway is the sacrifice of Marine Fighter Squadron 221 on the morning of June 4th 1942.   The Marine aviators flying a mix of 21 obsolescent Brewster F2A-3 Buffalos and 7 Grumman F4F-3 Wildcats engaged a vastly superior force of Japanese Navy aircraft as they vectored toward the atoll to begin softening it up for the planned invasion. 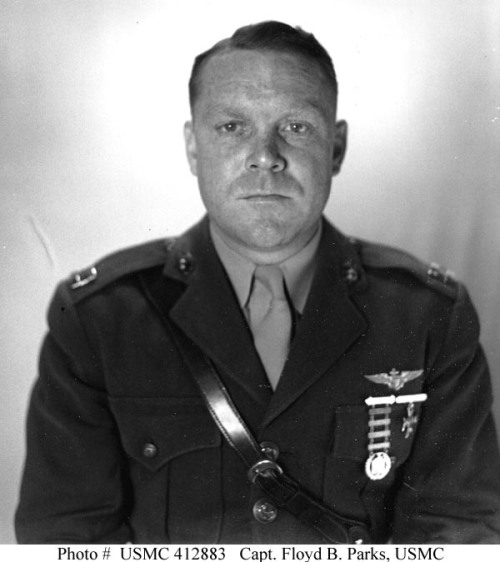 Led by Major Floyd Parks the squadron had arrived at Midway on Christmas day 1941 being delivered by the USS Saratoga after the aborted attempt to relieve Wake Island.  The squadron along with Marine Scout Bombing Squadron 241 (VMSB 241) formed Marine Air Group 22.  They fighter pilots of VMF-221 scored their first victory shooting down a Japanese Kawanishi H8K2 “Emily” flying boat. The squadron which initially was composed of just 14 aircraft, all F2A-3’s was augmented by 7 more F2A-3s and 7 of the more advanced F4F-3s before the battle.

When the Japanese First Carrier Striking Group was spotted in the wee hours of June 4th the Marines and other aircrew aboard Midway scrambled to meet them.  The 18 SBD-2 Dauntless’ and 12 Vought SB2-U3 Vindicator dive bombers of VMSB-241, the 6 TBF Avengers of the Navy Torpedo Eight detachment, 4 Army Air Corps B-26 Marauders and 15 B-17 Flying Fortresses flew out to attack the Japanese carriers while the fighters rose to intercept the 108 aircraft heading toward Midway. The 72 strike aircraft, 36 Aichi 99 Val Dive Bombers and 36 Nakajima B5N Torpedo/ High Level Bombers were protected by 36 AM6-2 Zeros which thoroughly outclassed the Marine opponents in speed, maneuverability and in the combat experience of their pilots. 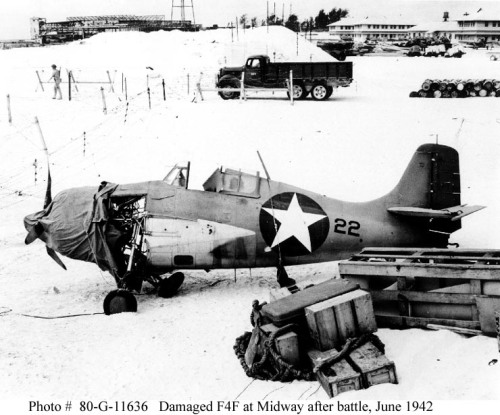 The Marines audaciously attacked the far superior Japanese force, throwing themselves against the Japanese phalanx with unmatched courage.  Despite their courage the Marine fighters were decimated by the Japanese Zeros.  The Marines shot down 4 Val dive bombers and at least three Zeros but lost 13 Buffalos and 3 Wildcats during the battle.  Of the surviving aircraft only three Buffalos and three Wildcats were in commission at the end of the day. Among the casualties killed was Major Parks.  Of the surviving pilots of VMF-221, two became “Aces” during the war. Lieutenant Charles M. Kunz would later fly in VMF-224, adding six victories to end the war with 8 victories. Capt. Marion E. Carl would later fly in VMF-223 raising his score to 18.5 Japanese aircraft shot down.  Other pilots like 2nd Lieutenant Clayton M. Canfield shot down two additional aircraft while flying with VMF-223. 2nd Lieutenant Walter W. Swansberger won the Medal of Honor at Guadalcanal. 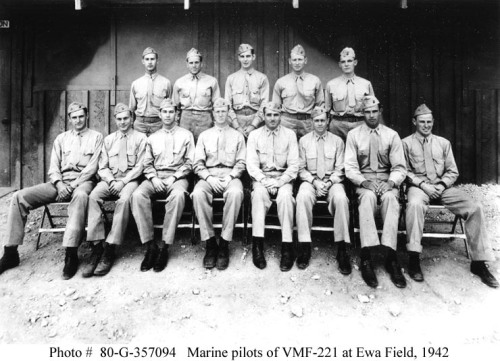 The last remaining Marine fighter pilot of VMF-221 from the battle of Midway, Williams Brooks died in January 2010 and was buried with full military honors, in Bellview , Nebraska.  Brooks in his after action report described his part in the battle:

I was pilot of F2A-3, Bureau number 01523, Our division under Capt. Armistead was on standby duty at he end of the runway on the morning of June 4, 1942, from 0415 until 0615. At about 0600, the alarm sounded and we took off. My division climbed rapidly, and I was having a hard time keeping up. I discovered afterwards that although my wheels indicator and hydraulic pressure indicator both registered “wheels up”, they were in reality about 1/3 of the way down. We sighted the enemy at about 14,000 feet, I would say that there were 40 to 50 planes. At this time Lt. Sandoval was also dropping back. My radio was at this time putting out no volume, so I could not get the message from Zed. At 17,000 feet, Capt. Armistead led the attack followed closely by Capt. Humberd. They went down the left of the Vee , leaving two planes burning. Lt. Sandoval went down the right side of the formation and I followed. One of us got a plane from the right side of the Vee. At this time, I had completely lost sight of my division. As I started to pull up for another run on the bombers, I was attacked by two fighters. Because my wheels being jammed 1/3 way down, I could not out dive these planes, but managed to dodge them and fire a burst or so into them as they went past me and as I headed for the water. As I circled the island, the anti-aircraft fire drove them away. My tabs, instruments and cockpit were shot up to quite an extent at this time and I was intending to come in for a landing.

It was at this time that I noticed that a important feature in their fighting. I saw two planes dog-fighting over in the east, and decided to go help my friend if at all possible. My plane was working very poorly, and my climb was slow. As I neared the fight both planes turned on me. It was then that I realized I had been tricked in a sham battle put on by two Japs and I failed to recognize this because of the sun in my eyes. Then I say I was out-numbered, I turned and made a fast retreat for the island, collecting a goodly number of bullets on the way. After one of these planes had been shaken, I managed to get a good burst into another as we passed head-on when I turned into him. I don’t believe this ship could have gotten back to his carrier, because he immediately turned away and started north and down. I again decided to land, but as I circled the island I saw two Japs on a Brewster. Three of my guns were jammed, but I cut across the island, firing as I went with one gun. But I could not get there in time to help the American flier and as soon as the Brewster had gone into the water I came in for a landing at approximately 0715 (estimated).

VMF-221 was composed of the following aircraft and pilots.

As for VMF-221 it was re-equipped with the F4F-4 and later with the F4U Corsair during the course of two more deployments overseas.  VMF-221 finished the war with a score of 155 victories, 21 damaged and 16 probable kills, the second highest total of any Marine Corps Squadron during the war.

Their bomber counterparts of VMSB 241 attacked the Japanese task force on the morning of June 4th and scored no hits while losing 8 aircraft. The survivors were again in action later in the day as well as the following day where they helped sink the Japanese Heavy Cruiser Mikuma with their squadron leader Major Henderson diving his mortally wounded aircraft into the cruiser’s number 4 8” gun turret.While the Marines’ actions are not as well known or as successful as those of their Navy counterparts they were brave.  Fighter pilots had to engage some of the most experienced pilots flying superior machines while the bomber crews had little to no experience before being thrown into combat. As we remember the sacrifices made by the men of Midway let us not forget the gallant men of VMF-221 and VSMB-241.