A Grievous Loss: CH-47 with 31 Americans believed Shot Down during Combat Operation in Afghanistan 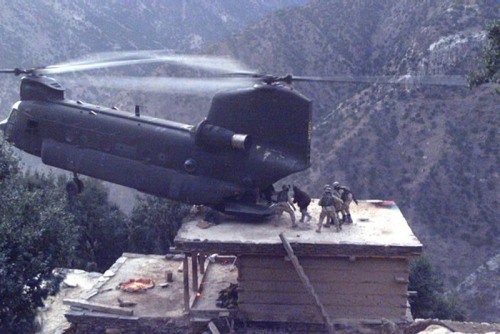 Yesterday a U.S. Army CH-47F helicopter from the elite 160th Aviation Regiment was shot down during a combat operation in Afghanistan’s Tangi Valley in the troubled Wardak Province killing 31 American Sailors, Soldiers and Airmen and 8 Afghan soldiers.U.S. officials have not confirmed the circumstances of how the aircraft was lost but a senior official speaking on condition of anonymity said it was apparently shot down said that 22 SEALS from SEAL Team 6 based inVirginia BeachVirginia, 3 Air Force Air Controllers, a dog handler and his dog and the air crew.

The Taliban have claimed the shoot down occurred when NATO forces were engaged in a heavy raid against their forces which were gathering in the Sayd Abad district and the head of the Afghan Police in the Province claimed that there was a two hour battle in the town of Jaw-e-mekh Zareen.  The Taliban official claimed that the aircraft was downed by a rocket propelled grenade as it was taking off from the roof of a building.  The Taliban official Zabihullah Mujahid said that 8 Taliban fighters were killed in the fight.

This morning I received a call from the chaplain that is my assistant at our hospital. She has the duty this weekend because I have had such a difficult time getting around when called in late on Wednesday night for the death of a newborn baby.  Since she was the duty she received the page that she was needed to accompany a Casualty Assistance Call Officer (CACO) to notify the family of one of these SEALS who lived in the local area.  We will be providing more assistance over the course of the coming weeks.  When she told me about the call I knew that it was in response to the SEALS lost in the crash because Sailors assigned to Marine units who become casualties are taken care of by their Marine Corps commands and the Navy Chaplains assigned to them. I thank God that I have been blessed having such an outstanding young Chaplain assigned to me.

This is a terrible loss of brave men and tragedy for their loved ones and shipmates.  That kind of loss tears a gaping hole in a small community.  Just on the practical side one does not produce the kind of skilled Special Operators assigned to SEAL Team Six, or DEVGRU overnight, these are the best of the best. They do not grow on trees.

The SEAL community will recover as they have done before but this loss hurts.  It hurts because even more because as a nation we don’t understand the war or how such sacrifices actually contribute to our national security.  We don’t even seem to know how we define “winning” or even if we can define what a “win” would look like if we can achieve it now.  I know combat hardened Marines who now fight for their fellow Marines and their brotherhood of war.   The same is true of Soldiers and Sailors that I know.  I would go to Afghanistan tomorrow if called in order to serve my fellow Sailors, Marines and Soldiers because for me after 10 years the war is personal.

I find it troubling that there are those that continue to act like cheerleaders and act as if the limited numbers of troops available can do a counterinsurgency mission that by doctrine requires far more troops, resources and time to do right and a national will to win.  The reality is we do not have the forces, the resources or the national will to “win” and we know from history that even winning militarily cannot be sustained unless Afghanistan itself changes and that history shows at best unlikely.

I am reminded of the words of General John Buford in opening part of the movie Gettysburg when I hear those that do the cheerleading from their comfortable political offices and think tank chairs when tragedies like this occur.

“They’ll be on his back in Washington. Wire hot with messages ‘Attack! Attack!” So he will set up a ring around these hills. And when Lee’s army is nicely entrenched behind fat rocks on the high ground, Meade will finally attack, if he can coordinate the army. Straight up the hillside, out in the open, in that gorgeous field of fire. We will charge valiantly… and be butchered valiantly! And afterwards men in tall hats and gold watch fobs will thump their chest and say what a brave charge it was…”

The cheerleaders may not wear tall hats anymore or have gold watch fobs. Instead they wear Armani suits and Rolexes. They always praise the bravery of the military from their luxurious perches as they gaze into the cameras of the parasitic media which only sees the story.  We will see hundreds of members of the Unholy Trinity of politicians, pundits and preachers thump their chest and praise the bravery of the SEALS and the Soldiers and Airmen that died alongside them in that ill fated Chinook on that tragic night over the next week, but this will fade quickly as these people go about the business of maintaining their power and position no matter what happens on the battlefields of Afghanistan and Iraq.

I have spent the day pondering the sacrifice of these men and praying for their loved ones and shipmates.  Since I have flown many night missions in Chinooks in Iraq including one that took fire I can readily imagine the last moments of these men.

I pray for the souls of these men and that somehow in tragedy that their loved ones and shipmates will find some measure of peace as they mourn the sacrifice of these heroes. I pray that we as their neighbors will do all that we can to help them.