We won’t let this Happen again….Until the Next Time 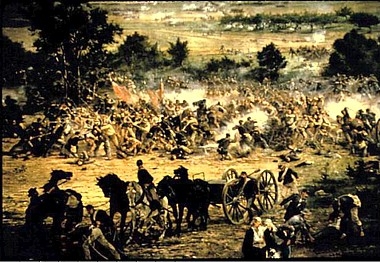 “I am disgusted and worn out with the system that seems to prevail.” Brigadier General John Buford

The news is abuzz tonight about the bi-partisan deal that has been agreed to by the President, the Speaker of the House and Majority Leader of the Senate.  The details will come out but certainly there will be those unhappy with the deal.  I don’t know what is in it and the devil is always in the details.

I am a realist and the details seldom bode well. Like John Buford a career Officer during the Civil War I have become disgusted and worn out watching the men and women that we have elected to public office work so hard to fracture this country that I hold so dear.

Tomorrow I expect that the deal will pass in the House and Senate unless the hard core right and left work together to embarrass their respective leaders. Since neither side had enough votes to do this on their own despite weeks of impassioned and often bitter argument with neither side listening to the other it has come down to this moment.  Personally in light of all that has transpired between the current Congress and the Obama administration even if this is passed Monday on Tuesday the death struggle will resume. Of course the deal may not pass and like Confederate General Robert E. Lee perhaps questioning his own rejection of  Union we might someday say  “the war… was an unnecessary condition of affairs, and might have been avoided if forebearance and wisdom had been practiced on both sides.”

That struggle has already begun as some Tea Party leader declared Congressman Allen West and three other Tea Party Supported House Members as “Tea Party defectors” for supporting Speaker of the House John Boehner’s plan over the weekend.  On July 27th Tea Party Nation leader Judson Phillips urged Boehner “to go” and be replaced by a “Tea Party Speaker of the House” while The Party Patriot co-founder Jenny Beth Martin suggested a similar thing.  Many Liberals are equally critical of the President and Majority Leader Harry Reid with a growing number stating that they believe that President Obama has betrayed their ideals one Democrat Congressman calling the deal a “sugar coated Satan sandwich.”

The battle lines are still drawn and the language except for the utilitarian language that compromise was necessary to stave off a default has not changed an iota.  The language of compromise does not sit well with the most vocal members of the Tea Party faction nor those on the hard Left.  Many Tea Party leaders and members continue to argue that their leadership to push the government into default to achieve their goals.

The default may not happen now but the crisis is not past.  No it will be with us for a long time with more division, more bitterness and more fuel being poured onto the flames of hatred that have consumed us.  Much like the various crises and compromises on the road to the Civil War nothing substantial has changed.  In fact William Gross the head of PIMCO one of the major global investment groups said that a downgrade was “inevitable” and that “Congress has basically proven itself to be dysfunctional and this will carry on for months even if the crisis is basically resolved in the next few days.”

We have crossed the Rubicon and unless an external and existential threat to our nation forces our leaders to work together I seriously doubt that this will end well.  The President failed to lead when he had a super-majority and his allies in Congress squandered the chance that they were given in 2008.  The Republicans after taking the House in 2010 are doing the same.  Neither side will admit to their behavior. Both will with good reason to point the finger of blame at their opponents while ignoring their own contributions to this sordid state of affairs.

I can see it as if has already happened. The Unholy Trinity of politicians, pundits and preachers will step up their rhetoric inciting their followers to adopt even more uncompromising positions.  The already fearful enmity will deepen and the center will disappear. Emotion in the form of hatred will drive the arguments that neither side will listen to even as the United Statesand the world economy worsens and the wars continue.  Young Americans will give their lives in Iraq and Afghanistan even as their political leaders on both sides of the aisle seek ways to reduce the force and even the pay and benefits that they have earned after 10 years of unending war that the rest of the nation while seemingly grateful does not understand nor share. “We few, we happy few…” William Shakespeare quotes Henry V before the Battle of Agincourt.

Tonight I have been watching the movie Gettysburg which I think is a fitting reminder of what happens when the Unholy Trinity finally achieves their goal of destroying the very fabric of the nation and pits brother against brother.  Hopefully cooler heads will prevail and somehow, some way we will get through this before we long for the day that makes what we are experiencing now look good.

Like General James Longstreet I wonder “Why do men fight who were born to be brothers?”