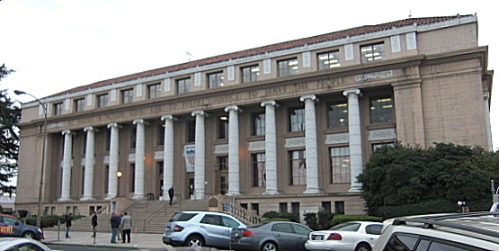 “Dreams are true while they last, and do we not live in dreams?”  Alfred Lord Tennyson

Every city has dreams. When I was in high school there was a billboard in Stockton California that read Stockton Someplace Special.  It was holed by more than one bullet and though it is no longer there and though the sentiment is derided by many, Stockton was a special place.  The home of a major inland seaport and a critical road and rail center the city sited in one of the richest agricultural regions in the world and near to the San Francisco Bay area and the Sierra Nevada Mountains it would seem to be the ideal place for economic development and prosperity.

But the dreams became a nightmare and Stockton California will become the largest city in the United States to file for bankruptcy protection. That could occur as early as Wednesday following the announcement Tuesday night by the City Council that the city was unable to reach agreement with its creditors.

It seemed like the good times were finally upon the City of Stockton California during the late 1990s and early 2000s. The city was growing as a result of a housing boom that brought new residents, new taxes and massive construction projects which left the city awash in tax revenues and willing to spend money to renovate the city. It felt like things were finally beginning to change for a city that had always been in the shadow of San Francisco to the west and Sacramento to the north.  But then the housing crash that began in 2006 and spiraled out of control in 2007 and 2008 gutted the city. Massive numbers of foreclosures and job losses destroyed the plans of those that hoped to ride the housing boom into permanent prosperity. Property tax revenue dried up as home values plunged over 50% and foreclosures mounted.  Ambitious city investments in public-private ventures failed to produce prosperity and long term contracts with public employees added to deficits that could not be met. Austerity programs that reduced the police department by 25%, the fire department by 30% and overall public employment by 40% have added to the city’s unemployment problem and decreased public safety and services.

Stockton has a 21 percent unemployment rate (not seasonally adjusted) which routinely has hovered around 15 percent the past three years. It is consistently on law enforcement top 10 lists in crime rate and violent crimes. It was recently ranked by the FBI as the most dangerous city in California. Forbes Magazine has listed it America’s “most miserable city” in 2009 and 2011. Over twenty percent of the population lives at or below the poverty line. For the past year the city which has a projected budget deficit of $26 million for the coming fiscal year with over 90 million in deficits in the preceding three years. It has been unable to reach agreement with its creditors and will be filing for Chapter Nine bankruptcy protection.

For me this is a sad moment. I spent a good portion of my childhood in Stockton and have many good memories of Stockton. It is also where my parents retired when my dad left the Navy and where my mom and brother and his family still live. My brother is a public educator and has seen the problems developing over the years. It is where I graduated from high school and where I met a married my wife Judy.  My visits have been limited due to my career in the military but when I go there I always am able to see friends and go to places that still feel like home.  At the same time I still have many friends that still call the city home and I hate to see how bad things have gotten.

I do hope that when all is said and done that Stockton will get back on its feet and that it will recover all that has been lost. For me Stockton is still someplace special that will again be a place where dreams can soar and where people will again be safe and prosperous.

One response to “When City Dreams Become Nightmares: Stockton California to Declare Bankruptcy”