Fear and Loathing in Damascus

The situation in Syria continues to worsen as the battle for Damascus heats up. Syrian Dictator Bashar Assad reportedly has moved his headquarters to the Alawite Mountains as fighting rages in the Syrian capitol.   The International Red Cross has declared what most of us already believed that the conflict is a civil war and call for the United Nations to intervene under Chapter 7 of the UN Charter grow ever stronger despite the opposition of Russia and China to those calls. 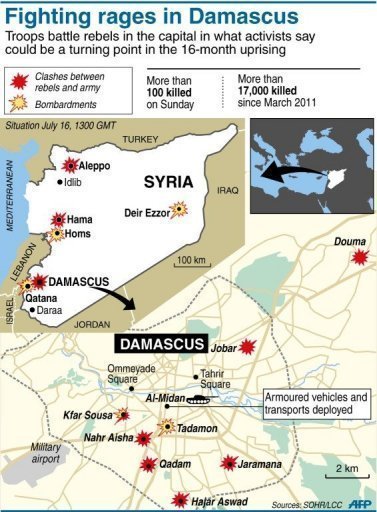 In the 16 months that this fighting has been going on an estimated 10,000-15,000 Syrians have been killed. Thousands more have been wounded, many are missing and the number of refugees in Turkey has risen to roughly 120,000.  Despite the harsh repression of the Syria government, military, security and police against the opposition the opposition continues to grow in strength and is being joined by increasing numbers of senior military officers and soldiers. 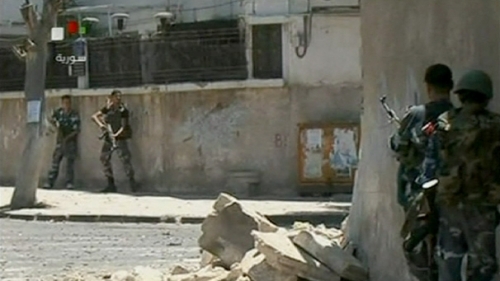 On Wednesday the 18th after four days of sustained combat in Damascus the Free Syrian Army struck a blow at the heart of the Syrian dictatorship of Bashar Al Assad. It was a blow that no-one saw coming except the plotters. From a strategic point of view it was a brilliantly executed strike that will inspire fear among Assad’s loyalists and increase the opposition to him. 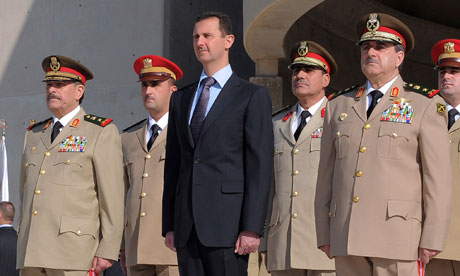 Both the FSA and the Liwa al-Islam group claimed credit for a strike using a remotely detonated explosive inside the national security headquarters building in to decapitate the military and intelligence leadership of the Assad regime. Killed were Defense Minister Dawood Rajiha; and his “deputy” Asef Shawkat. Shawkat is Assad’s brother-in law and one of the regime’s most feared strongmen.

Defense Minister Dawood Rajiha; and his “deputy” Asef Shawkat (below)

Also killed was Assistant Vice President Hassan Turkmani, a former Defense Minister who served as the head of Assad’s Crisis Management Office. Syrian State TV reported that Hisham Ikhtiar, director of the National Security Bureau, and Interior Minister Mohammad Ibrahim al-Shaar, were among those hurt in the attack.  Al Arabia reported that another key official, Hafez Makhlouf, head of the investigations at the Syrian Intelligence Agency was killed in the attack.

The dead were key members of Assad’s attempt to crush the rebels and maintain his control over Syria. Rajiha was the most senior Christian in the Syrian government. Shawkat who was the husband of Assad’s sister Bushra had been Assed’s enforcer who wielded great power in Syria and with Syrian dealings in Lebanon.  AFP reports that the “Syrian Observatory for Human Rights called Shawkat’s death “a severe blow to the Syrian regime since he played the main role in operations by regular forces to crush the revolution.” 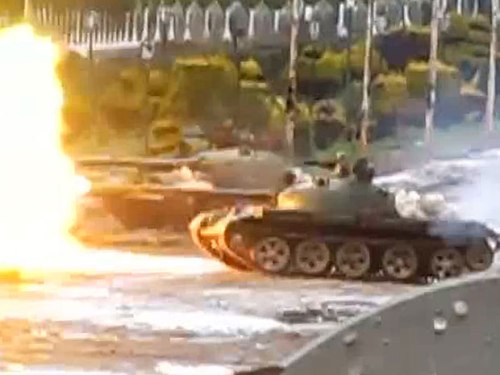 With the successful attack the revolution has reached a turning point. It has show the ability to strike at the heart of the Assad regime. Assad is counter-attacking but with the loss of such trusted key players his efforts, which have been a failure to date will be dealt a fatal blow. Even before the attack a number of Generals and other senior officers as well as thousands of troops have defected to the revolution. Rebels find arms and ammunition easy to come by in the corrupt Syrian government. Last week the Syrian Ambassador to Iraq Nawaf Fares defected to the rebels and claimed that he believed that Assad would use his chemical weapons against the opposition if he felt the need to do so.

The probable end of this is that the Assad regime will fall and a long term sectarian civil war like that that has plagued Lebanon since the 1970s will ensue. Hezbollah having lost its ally will attempt to retain power in Lebanon and influence events in Syria to their advantage, possibly attempting to gain control of Syria’s chemical weapon stockpile.

The collapse of Syria which to all before 2010 appeared to be stable by Arab standards despite fomenting problems for its neighbors will bring more instability, uncertainty and violence to the region. Expect that Assad’s loyalists among the Shite Alawite sect will be targeted for revenge by the persecuted Sunni majority. Also expect that Christianity will lose its last place of refuge in the broader Middle East as Syrian Arab Orthodox and Catholic Christians are targeted by all sides as were Iraqi Christians during the Iraq civil war and insurgency.