The Afghanistan Quagmire and the Escalation of “Green on Blue” Attacks 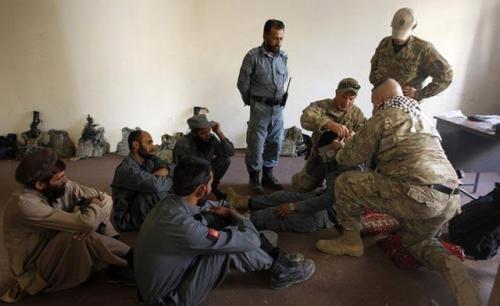 We have forgotten what it is to be wise when it comes to foreign policy and have over the past ten years failed to learn from history when it comes to fighting in Afghanistan. A survivor of the horrific disaster that befell the British in the First Anglo-Afghan War, Chaplain G.R. Gleig wrote after that war:

“a war begun for no wise purpose, carried on with a strange mixture of rashness and timidity, brought to a close after suffering and disaster, without much glory attached either to the government which directed, or the great body of troops which waged it. Not one benefit, political or military, was acquired with this war. Our eventual evacuation of the country resembled the retreat of an army defeated.”

This week has been another particularly horrific week for American troops in Afghanistan with our Afghan “partners” killing more Americans and NATO troops than our Taliban enemies. This week the command element of a combat brigade was attacked by a suicide bomber while going to a meeting with tribal leaders in Kunar province killing the Brigade Command Sergeant Major and two Majors from the Brigade staff. In a separate incident in Helmand Province three Marines were killed by a man described by an unnamed source to Reuters News as a Afghan National Police commander in charge of local police in Sangin district. They were at dinner with the Afghan when attacked. In a third attack a Afghan worker on an American base in Helmand killed three more Marines.

So far this year there have been at least 22 attacks by Afghan soldiers or police on US or NATO troops killing 33. In 2011 there were just 11 such attacks and 20 deaths. Any student of history should know that a foreign occupation force will never be accepted by most Afghans, especially tribal chieftains or elders. For them alliances with occupiers are only temporary measures to advance their own standing and power in Afghanistan. The British and Soviets both learned this the hard way and we seem to have forgotten the maxim that it is better to learn from the mistakes of others than make them yourself.

If there ever was a purpose to the Afghanistan campaign we seem to have forgotten it. We are in the process of withdraw. There is a danger inherent in any withdraw, especially in a geographically isolated place like Afghanistan. As we decrease in number and have fewer forces available to conduct operations our “partners” will make new alliances and turn against the forces that remain.

However we do not have the strategic or operational flexibility to send the number of troops needed to succeed in completely pacifying the country so we are in a double bind. The war saps our military strength, degrades our ground forces and pours money into an operation that we neither have, but need in order to modernize and strengthen forces for the wars that will certainly follow Afghanistan.

The British met with debacle in the First Anglo-Afghan War and the Soviets were saved from disaster by a smartly executed withdraw that did not leave many forces exposed to Afghan treachery. British leaders were especially deceived by their Afghan partners. Shortly before his murder at the hands of Afghan tribal elders who had supposedly agreed to protect withdrawing British forces and their camp followers, British envoy Sir William MacNaghten wrote: “We shall part with the Afghans as friends, and I feel satisfied that any government which may be established hereafter will always be disposed to cultivate a good understanding with us.”

The Soviets had no such illusions after their advisers in Herat were attacked with great loss before the 1979 invasion. They had their “green on blue” incidents but exacted painful and brutal retaliation. They also kept Afghan security forces at arms distance neither trusting them or allowing them much access to their bases. Unlike Iraq where green on blue incidents were isolated the situation in Afghanistan is little changed from when the Soviets or the British occupied the country.

“The latter [Soviet military advisors] served in particularly daunting conditions. They faced difference of language and tradition as well as mujahadeen infiltration in the ranks of supposedly loyal Afghan troops….” (Kalinovsky, Artemy: The Blind Leading the Blind: Soviet Advisors, Counter-Insurgency and Nation-Building in Afghanistan, p.6)

American and NATO political leaders are deceiving themselves if they believe that whatever Afghan government that comes after we withdraw will be friendly. It will not be and when we leave the unfortunate thing is that the Afghans will return to doing what they always do best, fight with one another. Nothing good can now come from our involvement in Afghanistan. The often heroic and noble sacrifices of so many brave men and women will be wasted and for what gain?

Otto Von Bismarck warned to “Beware of sentimental alliances where the consciousness of good deeds is the only compensation for noble sacrifices.” The situation in Afghanistan grows more precarious with each passing day. Our “alliance” with Pakistan is problematic and all supplies going into the Afghanistan must pass through either it or Russia. Our Afghan “partners” do not deserve the title of “Allies” we have made a Faustian bargain with the notorious Karzai government that has not helped our interests or those of the Afghan people an iota.

The situation in Afghanistan grows more precarious with each passing day.With the situation in Syria deteriorating and threatening to spill over into neighboring countries, with Iran and Israel blustering as we build up forces in the Arabian Gulf we do not have the luxury of simply keeping the status quo. We have to seriously ask why we are in Afghanistan and what we hope to accomplish for the great amount of blood and treasure that we are spending there.

That question must be asked of an answered by current political leaders in this country as well as those seeking to lead the country.