One Giant Loss for Mankind: Neil Armstrong Dead at 82 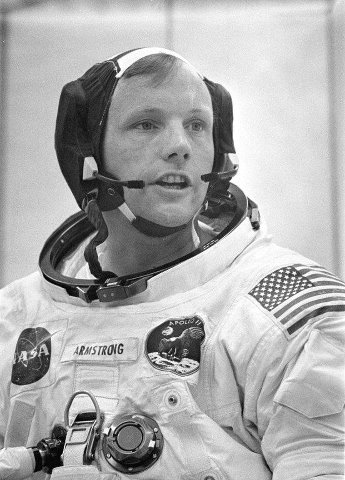 Today the United States and the World lost a true hero. Neil Armstrong, the first man to set foot on the Moon died of complications of heart surgery today at the age of 82.

Armstrong was born on August 5th 1930 in Wapakoneta Ohio. He fell in love with flying at an early age and earned his flight certificate when he was just 15 years of age. He became a Naval Aviator at the age of 20 and flew 78 missions over Korea while assigned to VF-51 aboard the USS Essex (CV-9) flying the F9F Panther.  He transferred to the Naval Reserve in August 1952 and returned to Perdue University where he earned a BS in Aeronautical Engineering and the to the University of Southern California where he earned a MS in the same subject. He became a Test Pilot with the National Advisory Committee for Aeronautics in 1955.

After seven years as a test pilot Armstrong was asked to join the fledgling NASA space program in 1962. He was one of two civilian test pilots to join the program, the other Astronauts were active duty Naval Aviators or Air Force Pilots.

He first flew in space in 1966 as the Command Pilot of Gemini 8 and as Commander of the Apollo 11 flight which made history landing on the Moon on July 20th 1969. I was 9 years old and remember it like it was yesterday. His words on setting foot on the surface of the Moon “That’s one small step for [a] man, one giant leap for mankind.” still echo as one of the most memorable statements in human history.

Armstrong retired from NASA in 1971 but remained active in teaching, business international contact and conferences regarding space travel. He served on NASA accident investigations for Apollo 13 of 1970 and the Space Shuttle Challenger disaster in 1986. He remained a proponent of further manned space expeditions and was openly critical of the cancellation of the Ares 1 Launch Vehicle and Constellation Moon Landing program in 2010. He also spoke out in favor of manned missions to Mars even offering his services to command such a mission in 2010 at the age of 80.

The loss of Armstrong is a great loss. He was both a visionary and an explorer.  Our leaders during the great era of the Space Program, from John F Kennedy to Ronald Reagan were visionaries who could unite disparate groups of Americans for common and great goals. One of our great problems today is that our leaders, especially political and business leaders have ceased being visionaries.  Religious leaders are even worse with the most influential promoting ignorance and fear while ignoring or denying science and anything that might challenge faith or more importantly their stranglehold on power. To me such leaders must have an awfully small God in order to promote such ignorance. There seems no vision on either side of the political divide for anything more than what political power and spoils benefits their side.  As a man who comments a lot on this site noted we cannot even accomplish unambitious goals, which have become “pie in the sky dreams.”  Our leaders seem to forget that without vision the people perish. The greatest accomplishment of humankind have been when when men or women reached for more than they could see, when they took risks, dreamed dreams and even in times of war or crisis were willing to believe that better was possible.

3 responses to “One Giant Loss for Mankind: Neil Armstrong Dead at 82”